If you keep up with your astronomy news, the name Beta Pictoris (affectionately known as “Beta Pic”) may ring a bell. This star is quite popular because of its easily observed debris disk and confirmed exoplanet. Beta Pic’s debris disk is similar to others, containing second-generation dusty debris left over from planet formation. But this debris disk is part of a special few that contain gas along with the dust. Something interesting may be going on to cause a clump of CO (carbon monoxide) gas within the disk – and where there is CO, there is often water. 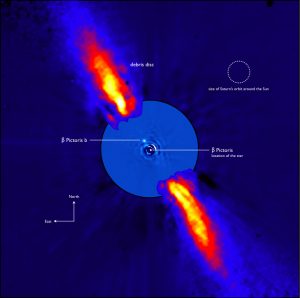 Figure 1: Composite image of Beta Pic shown in the near infrared. Beta Pictoris b (as well as the debris disk) visible, after subtracting the bright star from the image. (“All images used to make this composite were obtained on ESO telescopes equipped with adaptive optics.”) Credit: ESO/A.-M. Lagrange et al.

Gas within a debris disk is a curious thing, since we expect most of the gas to be expelled out of the disk by the time a true debris disk (lacking the original material that was present at star formation) has formed. There’s an off chance that it could be left over from the star’s primordial disk, but that is very unlikely in the case of Beta Pic. Astronomers have essentially seen the CO in the same places as the dust, insinuating a common origin. Plus, previous studies have determined that the lifetime of CO in the disk is only ~50 yrs, so any CO that we observe must have been formed recently. Astronomers think that this CO has been released by colliding debris, similar to solar-system comets, which release both trapped CO and H2O upon impact. So… where is the water?

Today’s authors commence this hunt for water in the Beta Pic disk by gathering archival data from the Herschel HIFI instrument. HIFI observed the rotational 110-101 transition of ortho-H20 (‘ortho’ just refers to the spins of the H atoms being parallel, while the “110-101” refers to the jump from the molecule’s lowest rotational level to the second lowest) on July 19, 2010, which actually resulted in a non-detection. But even a non-detection provides illuminating information as it provides us with an upper limit, which is like saying “this is the highest value that could be happening in order to still get the non-detection that we observe.” 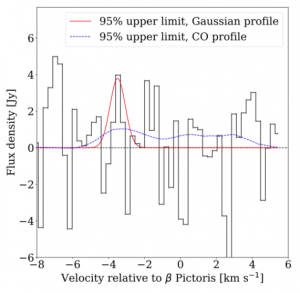 The authors assume the H2O must be present at the same places as CO if these exo-comets are like our own. There is a belt of this CO ~85 AU into the disk, but it clumps in the SW side of the disk. So, they create two scenarios – one in which potential H2O is produced solely in the clump, and a second in which H2O production shares the CO spatial distribution, i.e., the entire belt.

The spectrum taken by HIFI does not have the clear emission line of the 110-101 transition, so the authors develop model spectral profiles for each of the two scenarios using a Monte Carlo method – from this, 95% upper limits are derived (Figure 2). With these expected profiles, the authors are able to convert upper limits on the line flux (which are defined by those 95% upper limits) into upper limits of H2O mass.

Since the H2O line that the authors are interested in is an emission line, that means something must be exciting the molecule. Electrons are the main colliders with H2O, which means that modeling (the authors used RADEX in this case) requires an electron density and temperature to determine the H2O mass. The authors use a range of four realistic gas kinetic temperatures (determined from CO in a previous study) and three different electron densities to model the line flux as a function of mass, which is shown in Figure 3. Where the curves (models) and the horizontal lines (95% flux upper limits) meet represents the upper limits on the H2O gas mass for each set of parameters. 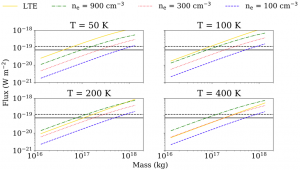 So what does this mean? The authors have a couple ideas about what may be happening to produce these results. One possibility notes that, according to the author’s calculations, H2O’s lifetime at this part of the disk is only 3.5 days as opposed to approximately 50 years for CO; maybe there are episodic collisions happening and they just caught the disk at a bad time in which H2O wasn’t being produced. Or perhaps these cometary objects just have a make-up that is different from its solar-system comets and therefore do not produce water upon impact.

The H2O gas mass upper limit is important, since debris disks and its contents (like potentially colliding comets) tell us a lot about planetary formation. Whether those contents are similar to or different from our own can tell us a lot about how common, or uncommon, star systems like our own really are. Hopefully with future instruments, like the Square Kilometer Array, astronomers will be able to tell us more about Beta Pic’s comets and whether they share similarities with our own space rocks.