Up on a mountain in Tucson, a group of roughly 30 high school students and 12 astronomers play with liquid nitrogen, 3D printers, hike the mountain, convert a gym into a data reduction station, and stay up till 4AM observing through 61’’, 60’’, 32’’ telescopes. What’s going on here? It’s Astronomy Camp!

At the advanced teen Astronomy Camp, teenagers can live like an astronomer for a week. Students from all over the U.S. (and sometimes the rest of the world) spend one of the first weeks of their summer break in Tucson. These students all have one thing in common — they want to learn more about astronomy, and what it’s like to be an astronomer.

I was lucky enough to participate as a camper when I was in high school. Fast forward six years, and I’m a camp counselor.

Me (the one in the middle, with the sass) 6 years ago at the WYIN telescope at the 2013 Astronomy Camp. Also pictured is a future optical engineer, graduate of Yale astrophysics, and political activist.

A Week in the Life of an Astronomy Camper

Astronomy Camp is run by Arizona astronomer Dr. Don McCarthy, who has been running the camp for 30 years now. The goal of the week-long camp is for the campers to live like astronomers. They spend the first two nights getting to know the telescopes on Mt. Lemmon and then team up to create their own research projects once they understand what each of the optical, infrared, and radio telescopes are capable of. Astronomy camp is where I learned that a 32’’ telescope is called that because its mirror is 32” in diameter. It’s also where I learned that there was such a thing as radio astronomy (and that it could be done during the day!). 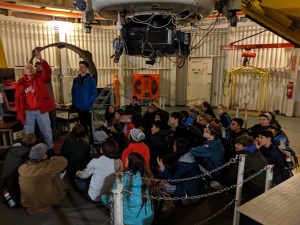 Don McCarthy (red) showing the campers the 61’’ telescope on Mt. Bigelow the first night of camp. This is a research telescope that is often over-subscribed, but this camp was given 5 nights of observations. On the first night an eye-piece was attached to the end of the telescope.

The campers at astronomy camp are a unique group of students who already have an interest in astronomy and are ready to take in as much knowledge as they possibly can. It’s quite a unique outreach opportunity to be surrounded by high schoolers, all of whom are very interested in astronomy. When working an outreach event with a typical group of highschoolers, the goal is to try to get them interested in space and astronomy. At camp, that interest has already been sparked and is looking to be fanned. Although it sounds cheesy, these campers taught me a lesson. They taught me the importance of asking good questions. 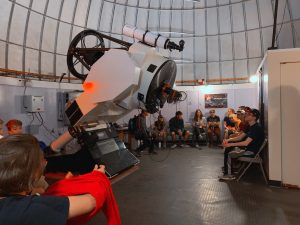 Campers sitting around the 32” telescope on Mt. Lemmon waiting for the dome to be opened for the night.

Throughout the week, counselors gave presentations about their science. It was an opportunity for campers to ask all the questions that were on their mind regarding each of our fields of expertise. On the third day of camp, I gave a talk with another counselor on radio astronomy and protoplanetary disks. Throughout the presentation, the campers tested me on my knowledge of fundamental topics. I would state a fact that is now simple to me, like “to detect molecules in star forming regions, we observe the photons that are emitted when an electron falls down an energy level.” and they would ask:

“Why is a photon emitted?” “How often does an electron go down an energy level, and what causes that?” “How do we observe that photon?” “Why were they in a higher energy level in the first place?” (Thank goodness I had just taken an interstellar medium course!)

Upon reflection, I came to the conclusion that their questions were motivated by a two things: 1) craving to fully understand concepts, and 2) by an unashamed lack of knowledge. With those tools, the campers gleaned as much knowledge as they could from me and the other counselors. Their questions, powered by curiosity and the fact that they weren’t afraid to ‘be in the dark’ about concepts shows me that they had the ability to think critically – a vital quality for all scientists. 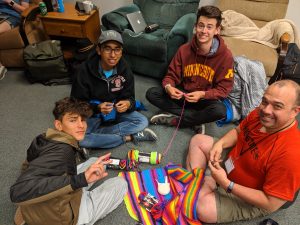 Campers learn how to crochet from an astronomer — an important skill to have when waiting for your observing time.

We are all curious. If you are a scientist or a scientist-in-training, you are pursuing the career you have because you started out innately curious about the world and/or universe. However, after going through my high school and college courses I know I sometimes fall into the trap of just taking everything that my professors and textbooks tell me for granted. That doesn’t work in research. We need to question why our data looks the way it does — is it what we expected? What are the biases we might miss? We need to be able to question every aspect of our data, and other groups’ data in order to contribute new and exciting science. The ability to ask questions is something that can’t really be taught in courses; such an ability comes from pure curiosity. Through camp, I realized that after the rigor of a busy physics course load, I had lost my innate curiosity in the basic fundamental properties that power the phenomena behind my ‘bigger’ science questions. But it wasn’t lost on the astronomy campers.

Unafraid to be in the dark 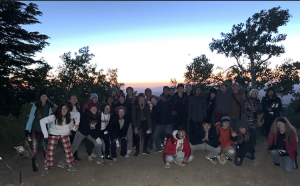 Campers posing after watching the sunset – which was a daily activity and such a beautiful sight when at 9,000 feet in elevation.

The second quality you need to possess in order to ask critical questions is the ability to be brave enough to say “I don’t understand this.” Throughout camp, I noticed that the campers were not afraid to ask me to clarify if what I said didn’t make sense to them. From my experience, that can be a pretty intimidating thing to do. Speaking as an anxious human, asking questions, especially when it feels like you’re asking someone to repeat themselves feels like questioning authority, and that you’re pushing too hard. That idea is reinforced when everyone else in the class seems to know what’s going on. Or when you’re the only one who shows up to office hours every week. Somewhere along our academic journey it became embarrassing to not know what was going on in class. And that slows us down even more in both classes and in our everyday life. No matter what job or goal you have in life, we need that ability to say “I don’t know this, please explain it to me.”

Astronomy camp was an amazing and life-shaping opportunity for me as a camper. It’s what convinced me I’d enjoy the life of an astronomer. And six years later, astronomy camp was still significant experience for me. Being a camp counselor at astronomy camp reminded me that outreach benefits both parties — it inspires the next generation of scientists and reminds us why we became scientists in the first place. Camp has helped me rediscover my fundamental  curiosity and has inspired me to speak up more when I don’t understand things. I think we can all be better scientists if we could be a bit more like these astronomy campers.

Hi! I am a forth year graduate student at the University of Michigan. I study protoplanetary disks, which set the stage for planet formation. For the past few years I've been using high resolution ALMA data to pull out the 2D thermal structure of different types of disks using thermo-chemical modeling. Outside of astronomy, I love belting showtunes, eating Thai food, I enjoy crafting, and I love to travel and explore new places. Check out my website: https://sites.google.com/umich.edu/jcalahan

Outreach for Astronomers: Letters to a Pre-Scientist and MIT Astrogazers

AAS Astronomy Ambassadors and You

The Next Generation of Astronomers

How TAs Make a Difference in the Classroom