The First Molecule in the Universe

The Dawn of Chemistry in the Universe

Have you ever wondered what the first molecule that formed in the universe was? As the temperature of the young universe cooled to below 4000 K (or about 7000 °F / 3700 °C), light elements produced during Big Bang nucleosynthesis began to combine together to form electrically neutral atoms – a process, somewhat confusingly, referred to as recombination. The helium ions He2+ and He+ were the first to combine with free electrons to form neutral atoms, with hydrogen following shortly thereafter. In this metal-free and low-density environment, the stage was set for the formation of the first molecular bond in the universe: the helium hydride ion HeH+. As recombination progressed, the eventual destruction of HeH+ created a path to the formation of molecular hydrogen, the most abundant molecule in the present universe. Despite its importance in models of the chemical evolution of the early universe, the HeH+ ion had never before been detected in interstellar space. In today’s astrobite, we take a look at how astronomers found the first molecule ever created in the universe and the implications for the origins of chemical complexity in the present universe.

Finding HeH+ with a Flying Observatory

Astronomers often identify different molecules in interstellar space by observing the spectral signatures arising from rotational transitions of those molecules. However, in the case of HeH+, its most favorable rotational transition occurs at infrared wavelengths that are blocked by ozone and water in Earth’s atmosphere, which prohibits searches using ground-based telescopes. To overcome these atmospheric limitations, today’s authors used an airborne observatory called the Stratospheric Observatory for Infrared Astronomy, or more commonly SOFIA.

SOFIA is a Boeing 747SP modified to carry a 2.5-meter reflecting telescope and flies at altitudes of 38,000-45,000 feet, which is above 99% of the Earth’s infrared-blocking atmosphere. At these altitudes, the skies become transparent and such observations provide astronomers a new window in the infrared universe. With the recent deployment of the German Receiver for Astronomy at Terahertz Frequencies (GREAT) spectrometer, today’s authors were able to target the HeH+ J = 1–0 transition at a frequency of approximately 2 THz. An overview of SOFIA with a description of its key components is shown in Figure 1.

The Stratospheric Observatory for Infrared Astronomy, or SOFIA, is a joint U.S.-German project featuring a 2.5 m telescope mounted on a modified Boeing 747SP jet. During 10-hour, overnight flights, SOFIA observes the solar system and beyond at mid- and far-infrared wavelengths to study everything from star formation to interstellar clouds and even black holes.

Today’s authors searched for HeH+ in the nearby planetary nebula NGC 7027. Planetary nebulae are emission nebulae that are comprised of an expanding, glowing shell of ionized gas ejected from red giant stars late in their lives. This nebula is young at only 600 years old and its ejected stellar material is still dense and compact. The central star in NGC 7027 is extremely hot and bright. It’s 30x hotter than our Sun and 10,000x brighter. The intense radiation field produced by this central white dwarf star combined with a high density of hydrogen and helium allow detectable amounts of HeH+ to form. During three flights in May 2016, SOFIA was pointed towards NGC 7027 and observed for a total on-target integration time of 71 minutes. Emission from the HeH+ J = 1–0 line was clearly detected and is shown in Figure 2. 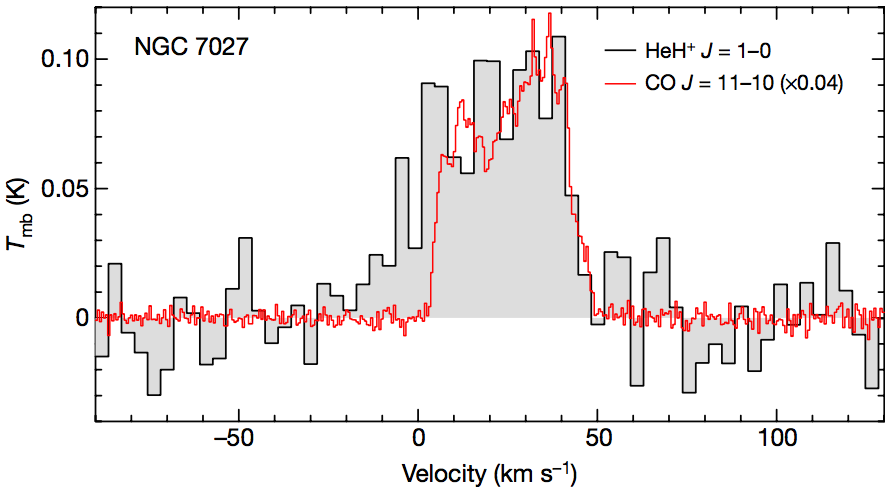 SOFIA spectrum of the HeH+ J = 1−0 ground-state rotational transition toward NGC 7027. For comparison, the CO J = 11–10 line, which probes the dense inner edge of the molecular envelope near the ionization front from which the HeH+ emission is expected to originate, is superimposed in red. The grey shading shows the area above and below zero for each spectral channel. The x-axis has been converted from frequency into velocity and the y-axis shows the main-beam brightness temperature, a specialized unit that measures the amount of light received at a particular frequency. Adaptation of Figure 1 in the paper.

A New Window into Primordial Chemistry

Although HeH+ is of limited importance on Earth today, the chemistry of the universe began with this ion. Chemical models of the early universe relied on the presence of the helium hydride ion in order to form molecular hydrogen, the primary molecular driver for the formation of the first stars. The previous lack of detection of this molecule called into question our understanding of chemistry in local plasmas and even our models of the early universe. The unambiguous detection reported here is a happy conclusion to a decades-long search. Such a success was only possible due to recent advances in terahertz technologies and the unique capabilities of SOFIA.

Hi! I'm a third-year graduate student at Harvard/CfA. I study chemical complexity in protoplanetary disks and star-forming regions using telescopes such as the SMA, VLA, and ALMA. In my free time, I enjoy hiking, bicycling, and traveling.