Both inside and outside the astronomical community, an ongoing debate rages about the construction of the Thirty Meter Telescope (TMT) on the summit of Maunakea in Hawai`i. This previous Astrobite explains much of the general context of this issue, which has been debated since before 2015. Most recently, the Hawaiian State Supreme Court approved construction of the TMT, starting on July 15. However, thousands of TMT opponents have peacefully occupied the access road to the site, halting construction efforts.

These protectors, or kia’i, oppose TMT for a number of reasons. Maunakea is a sacred place for many Indigenous Hawaiians (Kānaka Maoli), and opponents contest that TMT infringes on the rights of Kānaka Maoli to decide what is done with their land. Note that this is only a cursory summary of a complex and nuanced situation, which other articles (like this one) have laid out in more detail.

In light of these events, today’s Astrobite takes a deeper look at how the observatories on Maunakea and the astronomical community in Hawai`i have historically interacted with Kānaka Maoli. 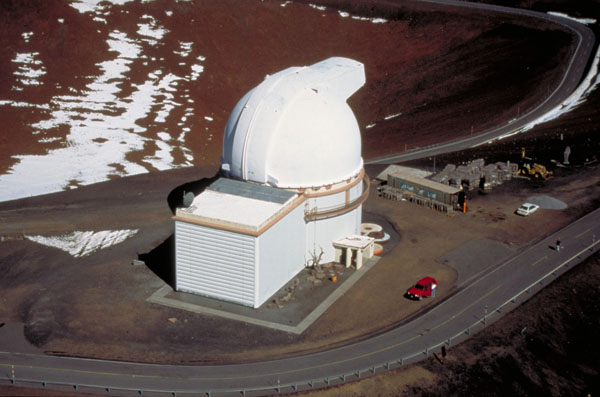 Until the late 1800s, Hawai’i was an independent sovereign kingdom with rich cultural and scientific traditions, including significant expertise in and practices of astronomy. The arrival of James Cook in 1778 spurred the colonization of the islands by American and European groups, whose occupation of Hawai`i eventually led to the overthrow of Queen Liliʻuokalani and the Hawaiian Kingdom by the United States Marines in 1893. The land was later annexed to the United States in 1898, and all land that was not privately owned according to written records was legally transferred to the new government. Hawai`i remained a territory of the United States until it gained statehood in 1959.

Less than a decade after Hawai`i became a state, telescope development on Maunakea began. The land near the summit was leased to the University of Hawai`i (UH) by the Board of Land and Natural Resources (BLNR) in 1968, and the first telescope on the mountain began operations in 1970. Soon after, plans for four more observatories began alongside community concern regarding these projects.

The 1970s also saw the first time western astronomers actively engaged with communities in Hawai`i. Several public meetings were held on Hawai`i Island in order to present an outline of planned development. However, these meetings were unofficial and therefore absent from the public record. Public comments in 1976 responding to one such presentation outlined feedback from community groups on Hawai’i island. These comments include a push to limit the number of observatories on the Mauna to six, details of UH’s failure to consider the cumulative environmental impact of the telescopes, and acknowledgement of the need to schedule official public hearings for community feedback.

It is also important to note the steps the observatories took to consider their impact on cultural resources. Although the Environmental Impact Statement (EIS) for the Canada-France-Hawai`i Telescope (CFHT) in 1974 does include a section on the cultural characteristics of land use on Maunakea, this section is rather brief and only states that no archaeological sites are within the proposed telescope site. Present-day cultural sites and the significance of Maunakea in Hawaiian culture were not addressed, and Indigenous Hawaiian groups were not consulted during the preparation of the statement. Despite concerns voiced by the public in the mid-1970s, such as a requested limit on the number of telescopes, plans for further development proceeded.

The beginning of the next decade marked the publishing of the 1983 Mauna Kea Complex Development Plan and EIS, which outlined proposed development on Maunakea up until the year 2000 and allowed for the construction of up to 13 telescopes. Like the CFHT EIS, the 1983 plan includes little mention of the impact on cultural resources, and did not consult Indigenous Hawaiian groups in its drafting (see p. 195 of Swanner 2013).

Over the next two decades, six more observatories were built at the summit, bringing the total number to ten. In response to growing concerns about the protection of land on Maunakea, the state conducted an audit in 1998 which outlined past development at the summit, detailed 30 years of mismanagement of the land, and deemed the protection of Maunakea’s natural resources inadequate. The audit also included recommendations for further development, encouraging the UH Institute for Astronomy (UHIfA) to seek input from state departments and the general public early in the planning process, thus highlighting the need for a more comprehensive master plan.

In response to the 1998 audit, an advisory committee was created in order to draft the new master plan. This time, the committee solicited community input through public meetings. Community feedback was primarily focused on present-day cultural resources and indigenous rights to land use. In one of these meetings, a Kānaka Maoli observatory employee stated that a family ahu (shrine) had been removed from the Mauna on three separate occasions, revealing the degree to which UH had not considered the present-day cultural significance of Maunakea during the past few decades of development (p. 200, Swanner 2013). This would prove to be a source of growing tension in the coming decades. 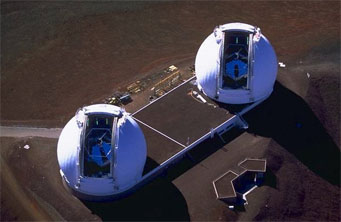 The two Keck telescopes. Extensions to these observatories were strongly opposed. Source: NASA

In 2000, the Master Plan was published by UH, which addressed community concerns found in the 1998 audit. This plan established the Office of Mauna Kea Management (OMKM) to responsibly manage the land, the Mauna Kea Management Board to act as a liaison between OMKM and the community, and the Kahu Kū Mauna Council to advise Maunakea management on Hawaiian cultural matters. The master plan also reduced the area at the summit available for observatory development. Even with these plans, opposition to the observatories continued to grow.

Plans for development on Maunakea were still underway. From 2000 to 2003, two more observatories were added to the summit, and plans for two extensions to the Keck observatories had begun. However, these ‘Outrigger Telescopes’ would never be built. In 2002, the Office of Hawiian Affairs, a public agency which works to improve the conditions of Native Hawaiians, sued NASA over the telescopes, stating that a full environmental impact study had not been done and “the cultural sensitivities ha[d] not been appropriately addressed”. This marked the first legal action taken from Native Hawaiian groups against the observatories, and prompted the need for a comprehensive management plan, which was completed by UH and approved by BLNR in 2009. This plan was prepared with community input, as dictated by the 2000 Master Plan. It also maintains a focus on the protection of both past and present-day cultural resources and includes new guidelines for the decommissioning of telescopes.

The ‘Outrigger Telescope’ lawsuit would not be the last time legal action was taken against observatory development. The process for approval of the TMT began in 2010, and was met with opposition from both the Indigenous Hawaiian community and allies in the astronomy community. A timeline of legal action taken against the TMT between 2011 and 2019 can be found here and here.

Present Day: Where do we go from here? 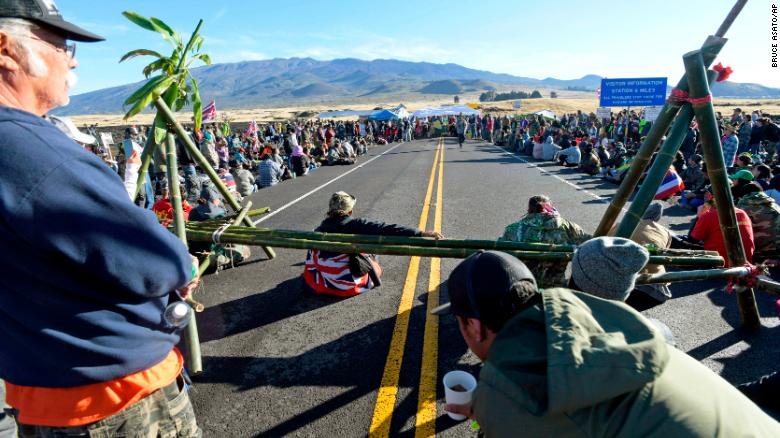 The recent events surrounding Maunakea and TMT have gained attention beyond communities in Hawai`i. Members of the astronomy community have been outspoken, with hundreds of astronomers signing an open letter opposing the criminalization of the kia`i, while other astronomers voice their support of the observatory. This week, Governor Ige held a press conference in which he withdrew the emergency proclamation issued when protectors first occupied Maunakea and extended the timeline for the TMT to start construction by another two years. The future of the TMT remains uncertain. While the option to build the TMT in Spain’s Canary Islands still remains open, there are no current plans to move the project. The protectors remain gathered on the Mauna.

Of course, the interaction between Indigenous Hawaiians and western astronomy isn’t an isolated incident. Observatories all over the world have encountered indigenous groups fighting for the rights and agency over their own land. We will detail some of these histories in a future Astrobite and in order to help further amplify the voices of these communities.

This article was prepared with the help of several Astrobites authors. The featured image is of the protectors on the summit access road. Source: Vox/Caleb Jones/AP Photo

I am a graduate student at the University of Hawaii at Manoa Institute for Astronomy, where I study the Sun and Low-mass stars. My current research focuses on how we can use detailed models of solar eruptions to understand eruptions on other low-mass stars. In my free time I enjoy rock climbing, painting, and eating copious amounts of mac and cheese.

Flipping the Paradigm: How Maunakea Scholars brings Astronomy Research to the Classroom

A Tale of Two Observatories: Astronomy and Indigenous Communities in the Southwest US