Sometimes, humans do pretty ridiculously cool things. In 2010, we landed a spacecraft on a hunk of rock hurtling through space, millions of miles away, so that we could bring a piece of it back to Earth. This was the purpose of Japan’s Hayabusa spacecraft: to visit the asteroid Itokawa, observe it, and return a sample to Earth for further study. Hayabusa was the first time we had attempted (and successfully completed!) a sample return from an asteroid. To follow up on this accomplishment, JAXA (the Japan Aerospace Exploration Agency) is now piloting another mission, Hayabusa2, to visit another asteroid. This time, though, they’re learning from past mistakes—Hayabusa’s surface rover failed to deploy correctly—and learning about a different type of asteroid, one which can help unveil the secrets of life on Earth.

So, where are we going?

Hayabusa2’s target is the near-Earth asteroid Ryugu, which lives between the orbits of Earth and Mars. Unlike Hayabusa’s target, Itokawa, which was a stony Type S asteroid made of silicates and nickel-iron, Ryugu is a carbonaceous Type C asteroid. That is, it’s primarily made of dark clay and silicate rocks, the primordial materials of the solar system, left over from planet formation. Objects like Ryugu are among the oldest in our solar system, and can tell us a lot about our origins—specifically, we think that water and organic materials may have come to Earth from asteroids like this one. By learning more about Ryugu’s composition and history, the Hayabusa2 team hopes to learn more about our origin stories, both how the solar system was born and how life on Earth came to be.

Where is Hayabusa2 now, and what is it doing?

In Summer 2018, Hayabusa2 reached its target, orbiting at only 20 km above its surface (keep in mind, that’s only ⅕ the distance spanned by the English Channel or Southern California’s notorious 405 freeway). It successfully deployed its first rover in Fall 2018, around the same time NASA’s OSIRIS-REx mission reached the asteroid Bennu. Earlier this year, it landed to collect its first sample (which you can watch a video of!) and very recently (July 2019) it collected another sample after it sent an explosive to impact the surface. This impact revealed the subsurface layers, which haven’t been affected as much by space weathering and thus can tell us more about the asteroid’s composition. All this time, the orbiter part of Hayabusa2 has been collecting remote sensing information, taking images and other data to characterize Ryugu’s orbit, shape, size, and more. Today’s paper takes a look at that first year of remote sensing data, reporting on what we’ve figured out about Ryugu and its interesting history.

What have we learned about Ryugu so far? 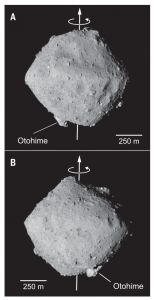 Figure 1: Visible light images of Ryugu, showing its strange shape and large boulders on the surface. (Figure 1 from the paper)

Hayabusa2 took images of Ryugu that were used to make shape models (Figures 1 and 2), revealing that it’s shaped like a spinning top. It’s only 1 kilometer in diameter—if you could run on Ryugu, it would only take you about an hour to circumnavigate this little asteroid. Its shape likely comes from being spun very quickly, like spinning a ball of pizza dough to stretch it out. Strangely, though, now we see the asteroid rotating way too slowly to create this shape, meaning that the fast spinning must have happened in its past. Maybe the spin came from collisions when it formed, or maybe it happened due to the YORP effect, where sunlight pushes on an asteroid unevenly and creates a spin.

Obviously, we have some questions about how Ryugu came to be, and looking at its density and composition adds to the story. Hayabusa2 measured the density of Ryugu, coming up with 1.19 grams per cubic centimeter. For context, water has a density of 1 g/cm3 and most Type C asteroids are more dense, usually around 1.6 to 2.4 g/cm3, meaning that Ryugu is probably porous (e.g. it has empty spaces within it). The photos of Ryugu also show lots of large boulders on the surface. Together, this leads us to the conclusion that Ryugu is probably a rubble pile—a collection of rocks, herded together by gravity. The current idea is that rubble piles are formed from the reaccumulation of small pieces after a larger object (like a planetesimal) was torn apart, suggesting that Ryugu may have also had this sort of violent past. 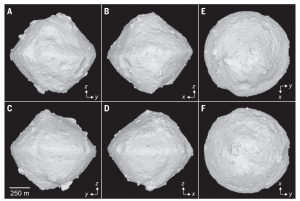 Figure 2: Shape models based on images of Ryugu, showing its surface from different angles. (Figure 2 from the paper)

One of the other goals of remotely observing is to determine a suitable spot for the upcoming landers and sample collections. Hayabusa2 has mapped the geology and surface features of Ryugu, showing that it has lots of boulders, a big ridge at the equator, and some craters. Since the craters are on top of the ridge, by the law of superposition, this means they had to have formed after the ridge, raising questions about the timeline of Ryugu’s geologic past. This paper also finds no evidence for grain segregation (sorting of large and small bits of rock), implying that there isn’t much activity happening on Ryugu’s surface. Since the ridge seems to be a spot of interest for figuring out Ryugu’s formation history, the team selected a target on the ridge for the first sample collection, as shown in Figure 3. 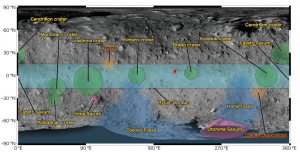 Figure 3: Map of named features on Ryugu’s surface, including an indication (red square) of the first sample collection site. Credit: The Planetary Society

Now that Hayabusa has collected its first samples, and is on its way to collecting more, we’ll hopefully soon have more information to help unravel these mysteries of Ryugu’s past. And in one short year (late 2020), we can expect Hayabusa2’s return to Earth, bringing us back pieces of this interesting, informative remnant of the solar system’s early days.

What happens when you throw a satellite at the Sun?