A Historical Nova and the First Radioactive Molecule in Space

Title: Astronomical detection of radioactive molecule 26AlF in the remnant of an ancient explosion

Nearly 350 years ago, two Sun-like stars collided in a spectacular explosion and formed a new type of star. The source, known as CK Vulpeculae (or more simply, CK Vul), was first seen in 1670 when observers reported the appearance of a new bright, red star. Initially visible with the naked eye, Nova CK Vul quickly faded and astronomers now need large telescopes to study the remnants left behind: a dim central star and surrounding hot, glowing gas (Figure 1). This gaseous debris, cast out into space during the violent stellar merger that created CK Vul, affords astronomers a unique opportunity to study the dense inner layers of a star, where heavy elements and radioactive isotopes are produced. In today’s astrobite, we take a look at the detection of a radioactive version of aluminum in this gaseous debris around CK Vul, which represents the first definitive detection of an unstable radioactive molecule outside of our Solar System. 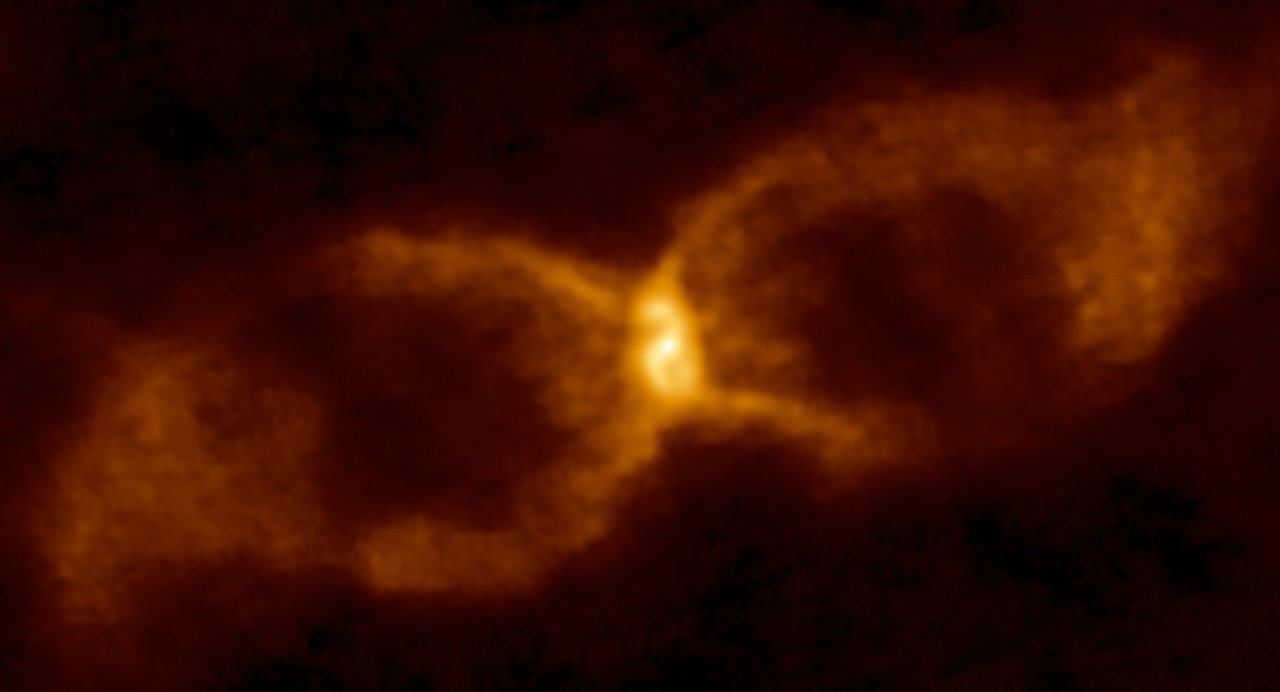 Unstable isotopes, such as 26-aluminum (26Al), have excess nuclear energy and eventually decay into a stable, less-radioactive form. Over three decades ago, astronomers detected diffuse gamma-ray emission from the β+ decay of atomic 26Al, indicating the presence of a reservoir of radioactive material throughout the Milky Way. However, these observations were taken with gamma-ray observatories that lacked the necessary angular resolutions and sensitivities to discern the precise mechanism by which these radioactive atoms were created. Instead, today’s authors decided to search for this radioactive material in its molecular form, where the radioactive isotope 26Al is bound to a fluorine atom.

To release excess thermal energy, rotating molecules in warm gas will emit light at very specific particular frequencies. By comparing the observed frequencies against those taken from laboratory experiments, astronomers can then uniquely identify the parent molecule. However, in the case of 26AlF, this last step was problematic. Since 26-aluminum is not present on Earth, there were no laboratory data cataloguing the rotational transitions of 26AlF, precluding its astrophysical identification. To remedy this problem, laboratory astrophysicists instead used spectroscopic data from the stable and abundant 27AlF molecule to extrapolate and predict accurate data for the much rarer 26AlF molecule.

With new spectroscopic data in hand, today’s authors searched for 26AlF using two state-of-the-art radio interferometers: the Atacama Large Millimeter/submillimeter Array (ALMA) in the Atacama Desert of northern Chile and the NOrthern Extended Millimeter Array (NOEMA) in the French Alps. These observations detected four separate rotational transitions from 26AlF and provided a firm detection of the first radioactive molecule in space. CK Vul was also found to possess a high abundance of rare isotopes relative to the cosmic “natural” abundance ratios. The unstable nucleus of 26Al is virtually absent in solar-composition objects and has only a modest abundance (1 part in 100,000) with respect to 27Al in the Galactic interstellar medium. But, in CK Vul, it is much more abundant, only about 7 times less than that of the stable isotope 27Al. Figure 2 shows emission from several rotational transitions of the newly-detected 26AlF molecule as well as the non-radioactive species 27AlF for comparison purposes. 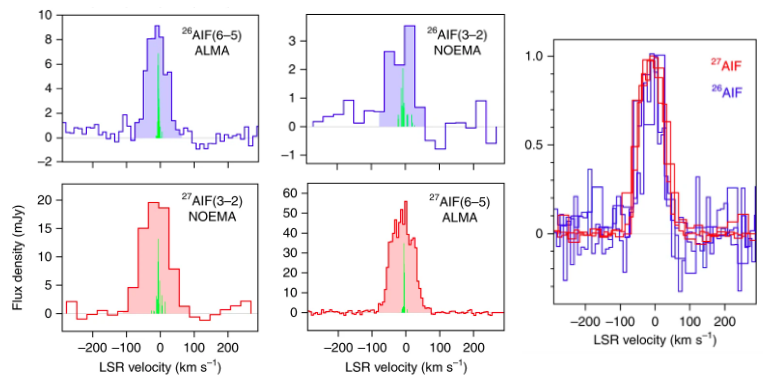 Figure 2: Spectra of rotational lines of AlF in CK Vul.  Left two columns: Two out of four observed rotational transitions from 26AlF and 27AlF. Green vertical lines illustrate the hyperfine structure of the transitions. Areas shaded in red and blue show the total emission from 27AlF and 26AlF, respectively. The transition and telescope used to collect the data are indicated in each panel. Rightmost panel: Normalized profiles of observed lines are overlaid to illustrate their close alignment. Red lines correspond to transitions of 27AlF, while blue lines are for 26AlF. All spectra are displayed in the local standard of rest (LSR) frame. Adapted from Figure 1 in paper.

Using these observations, the authors were also able to make detailed maps of the molecular emission of AlF and compare its spatial distribution with that of previously detected molecular species in CK Vul. As shown in Figure 3, they find that the AlF emission has a unique distribution, only being found in a small region toward the center of the remnant. Based on the distribution and intensity of 26AlF seen in these emission maps, the authors were able to derive a total mass of the observed 26Al, finding a 26Al mass that’s equivalent to about a quarter of the mass of Pluto.

Figure 3: Face-on view of molecular emission from 26AlF and 27AlF in CK Vul. Images and contours of emission in different rotational transitions of 27AlF (a-c) and 26AlF (d-f), as indicated by the labels in the top-right corners. The black contour is drawn at half the peak flux and the dashed cyan contour represents emission at the 3σ level.  Comparison of the AlF 6-5 with the map of continuum emission (g) and that of CO 3-2 (h). All the color images show flux at different linear scales. At CK Vul’s distance of nearly 2000 light years from Earth, the scale bars shown correspond to 5”=3500 AU and 13”=9100 AU, or about 50 and 180 times the size of our solar system. Crosses indicate the position of a known radio source associated with CK Vul. The white circle in the lower left corner represents the resolution of the observations, while the text above the circle indicates what observatory took the data. Adapted from Figure 2 in paper.

From previous detections of gamma ray emission, astronomers know that there must be at least two solar masses of 26Al present throughout the Galaxy, but until now, the process that produced these radioactive atoms was unknown. With this new molecular identification of 26AlF, astronomers have detected an unstable radioisotope in a molecule outside of our Solar System for the first time and at least one production mechanism for Galactic radionuclides. However, given the relatively low mass of 26Al found in CK Vul and the intrinsic rarity of these stellar merger events, the authors conclude that it is highly unlikely that such events are the dominant producers of the isotope in the Milky Way. Although still an open question, it is clear that radio interferometers, with their exquisite sensitivities, fine spatial resolutions, and ease of molecular identifications, will play an important role in astronomers’ future attempts to better understand the nucleosynthetic processes responsible for producing Galactic radionuclides.

Hi! I'm a third-year graduate student at Harvard/CfA. I study chemical complexity in protoplanetary disks and star-forming regions using telescopes such as the SMA, VLA, and ALMA. In my free time, I enjoy hiking, bicycling, and traveling.

Morpho-Kinematics of a Galactic Nova