Are we alone? It is perhaps one of the most profound questions we humans have ever thought to ask ourselves. An even more astonishing aspect of this question is that we may well be living in the first period of history where it might be possible to obtain the answer. Recent research has shown that our galaxy appears to be teeming with new worlds to discover and a growing number of the already known worlds orbit within their host star’s habitable zone, the region where water can exist in liquid form on a planet’s surface. The nearest potentially habitable planet orbits the star Proxima Centauri at just over four light years away. However, whilst the presence of water might indicate that a planet could be habitable, it’s not the same as saying that a planet is inhabited. Since we have little hope of visiting these new worlds in the near future, the best we can do is search remotely for atmospheric biosignatures – chemicals present in a planet’s atmosphere that suggest the existence of past or present life, for example oxygen, which exists in large proportions in the Earth’s atmosphere because it is continually produced by vegetation. Now a team of researchers, led by Jack O’Malley-James at Cornell’s Carl Sagan Institute, have discovered a previously unknown way to search for life in the Universe – observing the protective glow of biofluorescent organisms triggered by ultraviolet flares from red dwarf stars. 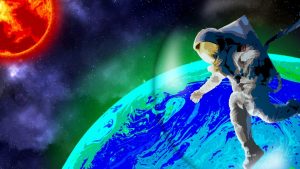 Red dwarfs, also known as M dwarfs, are the most common type of star in the Galaxy, accounting for 75% of all stars in our own stellar neighbourhood. They are both smaller and cooler than the Sun and tend to be much more active, especially whilst they are young. Their habitable zones are located much closer to the host star than for more Sun-like configurations, making it relatively easier to detect planets orbiting within these regions. It is likely that many of the first potentially habitable planets to be studied in detail with future instruments will reside in the habitable zones of such stars and therefore the first targets in the search for life are likely to be orbiting M stars such as the nearby Proxima Centauri, Ross-128, LHS-1140, and TRAPPIST-1 systems.

The frequent flaring of M type stars periodically bathes any habitable zone planets in high levels of harmful ultraviolet (UV) radiation, potentially destroying any life on their surfaces. UV radiation causes harmful effects such as mutation when absorbed by biological molecules, with short-wavelength UV causing the most damage to living cells. The Earth’s ozone layer protects us from the worst of the Sun’s UV radiation but not all planets are likely to be as fortunate as our own. Many organisms on Earth have also evolved to protect themselves from the harmful effects of UV in various ways – either by living underground, living underwater or by covering themselves in sun-shielding pigments. Other species, such as certain undersea coral and some fish species found in the Red Sea and Bahamas, have evolved a defense mechanism called photoprotective biofluorescence, where particular pigments and proteins absorb and convert the UV radiation to harmless visible green and blues, creating a beautiful glow that not only protects the organism from damage but could also be remotely detected. 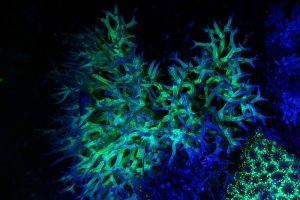 The researchers suggest that alien life on some exoplanets might have evolved a similar strategy to shield themselves from frequent flares. The temporary glow from biofluorescence, triggered by UV flare events from the host star, could light up the planet and expose otherwise hidden biospheres on newly discovered worlds. In high-UV environments, biofluorescent organisms may even evolve to become widespread and their fluorescence efficient enough to produce a signal detectable by Earth-bound telescopes.

To test this theory the team analysed the emissions produced by common coral pigments and proteins and created model spectra for a range of hypothetical Earth-like planets orbiting active M type stars. They examined the effects of varying surface features, the fraction of cloud cover and the extent of surface coverage by the fluorescing organisms in order to determine the detectability of these emissions and to test their feasibility as biosignatures of life. They found that for the most favourable case of a widespread, 100% efficient biofluorescent biosphere and cloud-free skies the visible flux from an Earth-like planet could increase by over an order of magnitude, a degree of brightening that could be observable from Earth with future large telescopes incorporating adaptive optics. 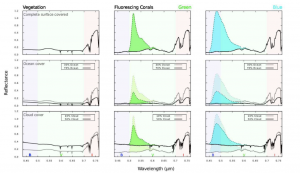 Figure 3: The resulting model spectra assuming 100 per cent efficiency and an active M star environment. Fluorescing corals (right) are compared with vegetation only (left) for surfaces completely covered in biosignatures (top row), additional ocean fractions of 30 and 70 per cent (middle row) and finally cloud coverage of 10 and 50 per cent assuming complete surface biosignature coverage (bottom row).  Figure 5 in the paper.

Current survey missions such as TESS (The Transiting Exoplanet Survey Satellite) are uncovering large numbers of habitable zone exoplanets around nearby M dwarf stars. If such organisms have evolved on other planets, and if they cover a relatively sizeable area of a planet’s surface then the next generation of large, ground-based telescopes, such as the European Extremely Large Telescope in Chile, might be capable of detecting the glow from biofluorescence once they become operational within the next 10 – 20 years. The detection of this glow, especially in response to flaring events, along with the detection of other biosignature gases such as oxygen would provide compelling evidence for the existence of life elsewhere in the Universe.