Title: Comparison of the deep atmospheric dynamics of Jupiter and Saturn in light of the Juno and Cassini gravity measurements

Jupiter’s horizontal banding is arguably one of the most iconic features in our Solar System, alongside Saturn’s rings. But did you know that Saturn also has similar horizontal banding? The two largest planets in our Solar System appear quite different, but they also share similarities. Today’s paper looks at data from two different spacecraft, Juno and Cassini, to compare and contrast the winds of both planets.

Unfortunately, humanity cannot yet explore planets beyond Earth, but we can send robot explorers in our stead. Both Jupiter and Saturn have enjoyed the presence of orbiting robot companions over the past twenty years. 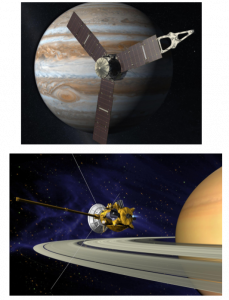 The Juno spacecraft has been orbiting Jupiter since 2016 in 53-day elliptical orbits that pass over the planet’s poles. Juno’s primary goal is to precisely measure Jupiter’s gravity field and figure out whether the planet has a solid core or one that diffuses into its atmosphere (the answer will tell us about Jupiter’s, and the Solar System’s, history). The elliptical orbits allow Juno to obtain precise gravity measurements during closest approach, or “perijove,” while avoiding the intense radiation near Jupiter most of the time.

The Cassini spacecraft entered Saturn’s orbit in 2005 with the goal of studying Saturn’s rings and moons in more detail than had been possible before. In addition to sending stunning pictures of the Saturnian system back to Earth, Cassini measured properties of Saturn’s atmosphere and magnetic field. The spacecraft entered an elliptical polar orbit similar to Juno’s and obtained gravity measurements of Saturn during its Grand Finale orbits (Cassini’s last hurrah before plunging into Saturn’s cloud tops in 2017). 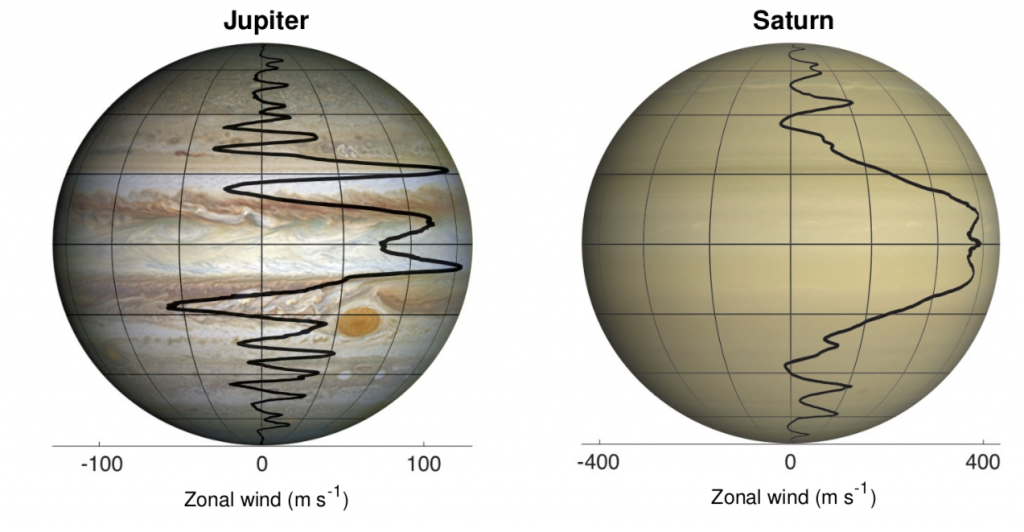 Figure 2. The east-west (zonal) wind flows of Jupiter and Saturn overlaid on optical images of each planet, showing that the zonal flow measurements align with visible horizontal banding. Positive wind speed indicated eastward flow, while negative wind speed indicates westward flow. Noticeably, Saturn’s westward equatorial flow is much stronger than any of Jupiter’s wind flows. From Figure 1 in the paper.

How does a planet’s gravity field tell us about how winds behave in its atmosphere? Winds redistribute mass around the planet, which consequently affects the measured gravity field. The gravity field can also reveal the depth to which the winds penetrate the atmosphere. Finally, the behavior of planetary winds is dictated in part by the Coriolis force, which depends strongly on the local gravitational field. Today’s authors explored different models for converting between the gravity and wind fields of Jupiter and Saturn. They tested their models with measurements from Juno because Cassini took only six orbits’ worth of gravity measurements at Saturn — Juno simply has more data.

The first model Kaspi et al. considered was a simple exponential decay model (e.g. Figure 2, left), where the wind strength decays radially with depth. They found that while this simple model did not exactly match Juno’s gravity data, it was close enough to indicate that the gravity measurements and the depth of the wind flows are related.

Subsequent models used more complicated functions to describe how the wind strength decayed with depth (e.g. Figure 2, right). While these models provided a more exact match to gravity measurements, there is no single “unique” correct model. It is possible to describe the gravity field with a finite set of values (see this post by Emily Lakdawalla for an extremely in-depth discussion), while the wind field requires many more variables to describe properly. In the end, the authors used the more-complicated models to conclude that the north-south (“meridional”) variation in the wind fields extends to the wind flow depth in the atmosphere, as does the east-west (“zonal”) variation.

Figure 2. Vertical decay profiles for the wind flows (left: simple model for Jupiter, right: more complicated model for Saturn). The y-axis represents the fraction of the wind strength compared to the cloud tops. The different curves incorporate varying details of the gravitational measurements from each planet. From Figure 4 in the paper. 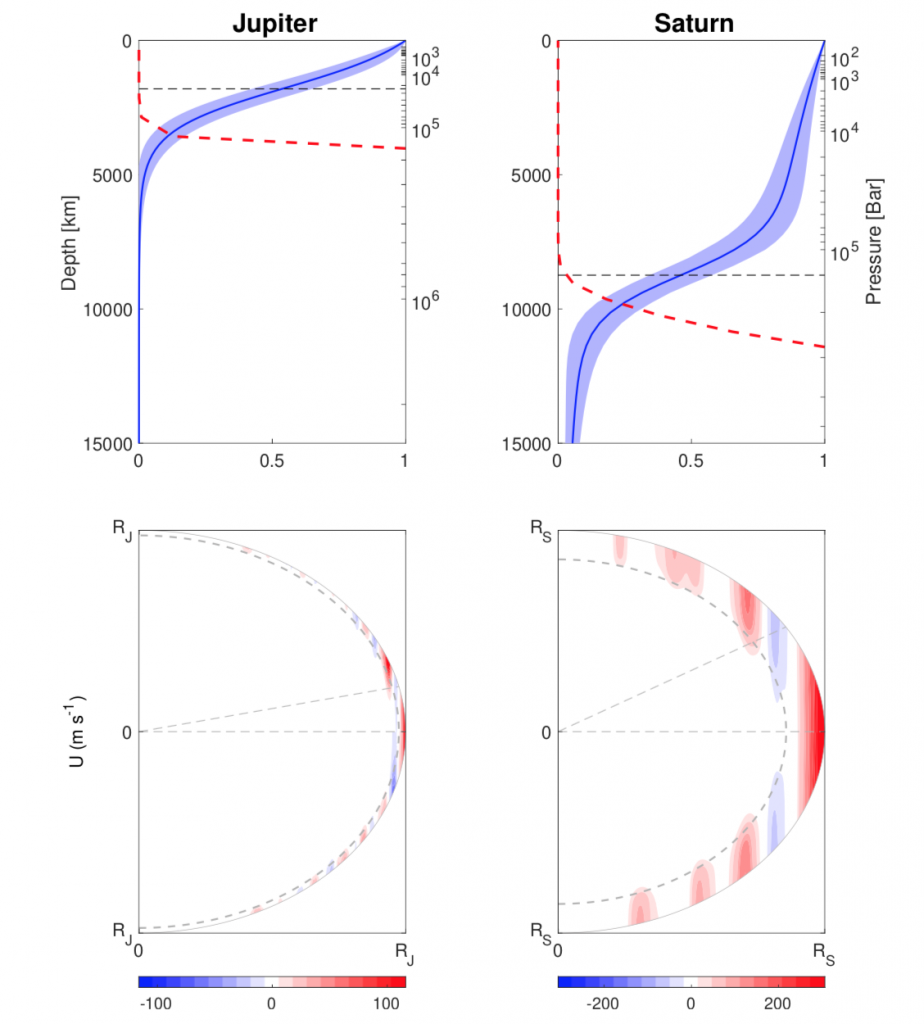 Figure 4. Top panels: The wind flow strength (blue) and electrical conductivity (red dash) as a function of depth in each planet’s atmosphere. The x-axis denotes each quantity’s strength compared to the maximum strength. Bottom panels: Wind velocity as a function of position in the wind flow shell (imagine looking at a cross-section of the outer atmospheric shell). Red represents westward flow and blue represents eastward flow. Gray dashed lines denote the boundary of the equatorial band of each planet (19º for Jupiter and 31º for Saturn). Figure 5 in the paper.

Using the simple model of converting between gravity and wind field measurements, the authors find that the bands on Jupiter extend to 3000km in depth (4% of its radius), while the bands on Saturn extend to more than 8000km (15% of its radius). While at face value it might appear that Saturn’s bands go much deeper (Figure 4, top), the wind flows actually dissipate at a similar atmospheric pressure in both planets due to Saturn’s lower density. That is, for both planets, the wind flows observed at the cloud tops essentially disappear at a pressure of ~

bar.** Despite the different depths corresponding to this pressure, the wind flows on both Jupiter and Saturn affect 1-2% of the total mass of each planet. Furthermore, the model correctly predicts the latitudes at which the zonal flow reverses from eastward at the equator to westward at the first band — 19º for Jupiter and 31º for Saturn (Figure 4, bottom).

bar also happens to correspond to the depth at which the electrical conductivity increases substantially in the atmospheres of both planets. At this pressure, the atmospheres have similar conductivities as salty room-temperature water. Zonal winds would create magnetic fields and electrical currents that dissipate a lot of the energy contained in the winds, leading to a rapid decay in the wind flows. However, there is still some decay between the cloud tops and the

-bar depth that can’t be explained by this energy dissipation mechanism. The problem remains an open question.

Today’s paper shows that despite differing considerably, Jupiter and Saturn exhibit similar features in terms of their wind flow behavior. The authors further predicted wind flow depths for Neptune and Uranus using their simple gravity-to-wind model and gravity measurements from the Voyager spacecraft flybys. While there is considerable uncertainty in the results, Kaspi et al. were still able to estimate a wind flow depth of 2000-4000 bar, affecting only ~0.1% of the total mass for both Neptune and Uranus.

Yet open questions remain. Why do the wind flows decay before the electrical conductivity of the atmosphere increases? Saturn’s flows are stronger than Jupiter’s, but why? How well do models of planetary atmosphere dynamics work for planets other than Jupiter and Saturn? Continued measurements from Juno and (Universe-willing) orbiter missions to Uranus and/or Neptune will help answer these questions.