Imagine walking out your front door tomorrow morning and gazing up at the sky. What if, instead being lit up by the light of one sun, your world was illuminated by two suns.

This isn’t as crazy as it sounds. Astronomers have found plenty of planets whose potential alien life forms would witness such a double sunrise. However, there are many unanswered questions about these planets that form around binary stars, such as how they end up living so close to their host stars, just outside the dynamical stability limit (the point past which planets/satellites can survive in a stable orbit).

Today’s authors seek to find out if these planets are more likely to form where they are observed (in situ formation), or if they form farther out and migrate inward (ex situ formation). Previous studies have shown that the dynamics of the circumbinary disk may have a lot to do with which of these two formation options is most viable. Using Smoothed Particle Hydrodynamics (SPH), the authors model their binary systems with various eccentricities (a measure of how circular or extended an orbit is), mass ratios (q = the ratio of the primary mass to the secondary mass), and dust properties to determine how dust and gas accrete onto the companion stars and their individual (circumstellar) or shared (circumbinary) disks. Their results shed light on where planets form most easily in binary systems, and whether or not in situ formation can actually take place where astronomers have observed such planets.

Modeling any stellar system, much less a system with two stars, gas, and dust, is difficult. We’ll save you the equations for the sake of space and time (spacetime!), but here are some key points to consider: 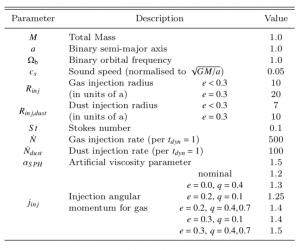 Figure 1: (Table 1 in the paper) Table of Simulation Parameters

The authors begin with two types of mass ratios: q

0.1. The first insinuates a giant planet/substellar secondary companion, while the latter represents a stellar companion. Four eccentricities between binary companions are used, e = 0.0, 0.1, 0.2, and 0.3. A full list of input parameters can be see in Figure 1.

Their model uses dust that we can assume to have similar dynamics as the gas. Gas is inserted into the system at a given radius and angular momentum, which are set to ensure that the gas’ orbit is allowed to become circular before it does any accreting. Dust is inserted after the gas after 50 binary orbits (to allow time for the gas to do its thing) and slightly closer in so that drag forces can be calculated and accounted for. The dust is such that it quickly joins the gas in the gas’ rotation around the binary.

Here’s the kicker that is important for planetary formation: dust can get trapped. There is such a thing as a pressure maximum, a place where dust becomes trapped in its rotation around the binary. So, two different scenarios become important from the authors’ model: 1) The dust in the circumbinary disk is trapped in a pressure maximum, creating an inner cavity and preventing further accretion or 2) The dust is not so trapped, allowing dust and gas to travel inward from the circumbinary to the circumstellar disks. 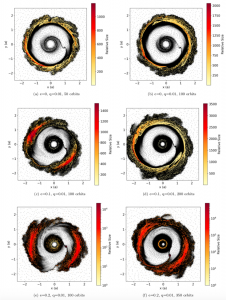 Implications for Exoplanets with a Double Sunrise

If the pressure maximum traps dust effectively, this could support in situ planet formation. A pressure maximum at the inner edge of the circumbinary disk would produce a high density of dust in one place, so that planetesimals could form if the dust collapses in on itself, instantly bypassing the meter-sized barrier. Even if this did not happen, pebble accretion (just what it sounds like – pebbles of dust colliding and sticking together) would be accelerated in a place of such high density – i.e., the planetesimals would form so quickly that they survive the high velocity collisions that would happen in such a crazy environment. In the second scenario where dust is not so trapped, in situ planets may form, but they would be more likely to be found in the circumstellar rather than circumbinary disk.

So, which scenario does the model support? Well, both! Turns out, it depends on the binary.

For a stellar companion (q

0.1), the dust initially accretes to the circumstellar disks but stops once the circumbinary disk becomes large enough (~2.2-2.8 times the binary separation), thus creating an inner cavity – this is indicative that a pressure maximum has formed outside of it. Yay for in situ planets, right? Not so fast. All these observed cavities extended farther from the star than where we observe real life circumbinary planets, so it looks like some migration may still be needed.

0.01). It has already been shown that these can produce cavities/dust traps on short time scales (potentially forming what is known as a transition disk) and the current model does indeed recreate this effect. However, the authors show that when you couple a planetary companion to a high eccentricity (e

0.2), the accretion that is typically halted by a dust trap continues on for much longer without forming the pressure maximum (see Figure 3 for more on accretion). Nonetheless, planets could form in situ with the circumstellar disks, but this seems unlikely, given what astronomers actually observe with systems like WASP 53 and 81. In these situations where planets form around a star with a very eccentric secondary, it seems like a chicken before the egg type situation – the planets came first and the eccentricity came later. 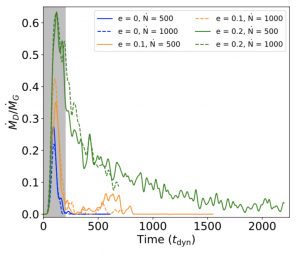 Figure 3: (Figure 2 in the paper) The ratio of dust to gas accretion rate (Y axis) as a function of eccentricity and resolution. The time in which the disks (circumbinary and circumstellar) are still forming is shown in grey. After formation of the disks, e=0 and 0.1 scenarios have negligible accretion while for the e=0.2 case, accretion persists for much longer.

What does this tell us about in situ planet formation around binary stars? It seems like in situ formation can happen, but likely not in the way that we think, and with great dependence on the circumstances involved.

The authors invite future studies to focus on the inclination angle of the secondary binary component, since larger inclinations away from the disk may help aid in planetary formation in the circumstellar regions. They also note that in order to obtain a full picture of planet formation, we need to look more closely at the atmospheres of already existing planets with double suns – this could give us clues as to where they formed. After all, the origins point the way to the future, and visa versa. As always, more shall be revealed with more observations!