Title: The hidden satellites of massive galaxies and quasars at high-redshifts


Simulations of galaxy formation are powerful laboratories for testing astronomer’s ideas about how the universe works. If those ideas are wrong, the simulations will not produce galaxies that look like the ones we observe. Satellite galaxies, which are small galaxies gravitationally bound to larger hosts, are especially good tests of the accuracy of simulations, since their properties are sensitive to many of the processes that affect their host.

Encompassing a host and its satellites is a dark matter halo, and the most massive of these have been shown to lie on spots of over-density in the early universe. In a previous paper, today’s authors predicted a significant over-density in the number of satellite galaxies around massive halos (greater than 10^12 times the mass of the sun). However, observations have not come back with concrete results confirming this idea. So where are these extra satellites?

Like checking the box that says “I receive too many emails” when unsubscribing from a mailing list, galaxies have their own ways of reporting an inundation of spam – or in this case, star formation. If left unchecked, most gas in galaxies would have already formed into stars and we wouldn’t see so much of it. However, galaxies have ways of preventing more stars from forming, either by energy released from the area around the central black hole (known as AGN feedback), or by energy released from the stars themselves (stellar feedback).

The authors of today’s paper wanted to understand the effect that stellar feedback has on satellite galaxies, so they left out AGN feedback from their simulations. They then ran two versions of the same simulation of a massive galaxy at a redshift of z=6 (about 12.8 Gigayears ago, roughly 1 Gy since the universe began), one with radiation (light) from stars and one without. Figure 1 shows some of the results of that simulation. 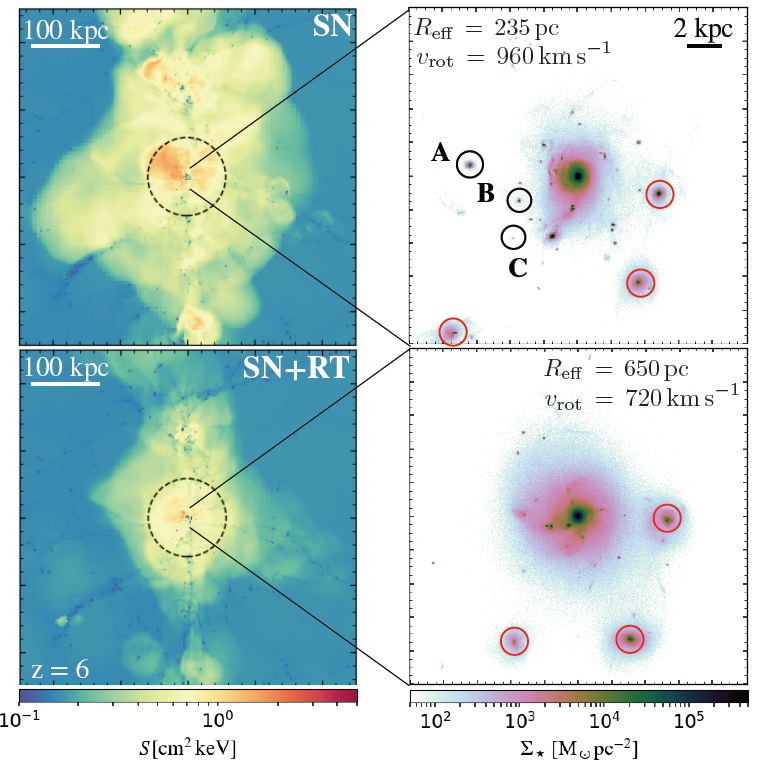 Figure 1: The two simulations run by Costa et al. The top is without stellar radiation and the bottom is with. The left panels show the mass-weighted entropy, or how “well-mixed” the system is. The right panels show a close-up view of the mass density. (Source: Figure 1 in the paper)

In the top right panel of Figure 1 we see satellite galaxies in circles. The red circles are satellites that appear in both simulations, but in the SN simulation (top) there are additional satellites circled in black that don’t appear in the simulation without stellar radiation. These are the hidden galaxies.

By looking at earlier redshifts (i.e. back in time), the authors found that these satellite galaxies form separately from their host, but their equivalents aren’t found at later times in SN+RT. 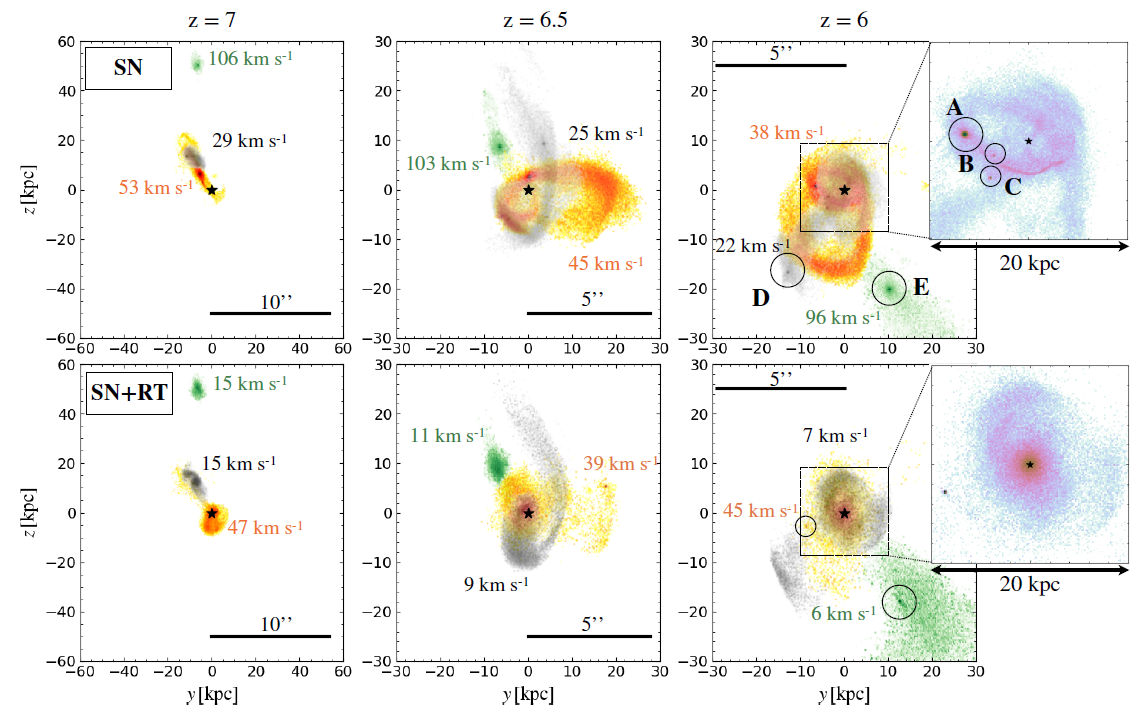 Figure 2: Three simulated galaxies (in green, grey and orange) at three different points in their lifetime. The top and bottom row represent the same systems in the simulation without stellar radiation (top) and with stellar radiation (bottom). In the SN+RT (bottom) simulation, tidal forces (like how our Moon causes tides on Earth) are more effective at tearing apart smaller galaxies as they near larger ones. (Source: Figure 3 in the picture)

To find these missing satellites, the authors looked back in the galaxy’s history and found three individual galaxies, shown on the left in Figure 2 for both the SN and SN+RT simulations. The colors trace the individual components of each separate galaxy until they become mixed up in the right panels.

This history shows that the satellites seen in SN but not SN+RT are actually the remainders of galaxies that got eaten up by what is now the host. The authors postulate that they do not appear in the simulation with stellar radiation because the wider envelope of gas around the host consumes the satellites more effectively than the denser host in the simulation without stellar radiation.

The authors of today’s paper have shown that stellar radiation is an influential component in simulations of galaxy formation. It causes galaxies to be less centrally-dense and have less satellite galaxies than predicted from less rigorous methods. With stellar radiation, there are also weaker supernovae and less structure. When the James Webb Space Telescope launches, it will be able to detect more satellite galaxies and confirm how accurate simulations like these are.

Satellite galaxies also have an important lesson to teach us about how to succeed at hide and seek: blend into your surroundings by being almost completely consumed by them. On second thought, it may be best for you to keep your structure and stick to hiding behind the couch.