At the centre of the most massive galaxies resides a supermassive black hole around which everything rotates. Typically, these black holes are identified by measuring the velocity and shape of the orbits of a galaxy’s innermost stars as they rotate around its centre. However, this approach is less effective when we consider much lighter galaxies like dwarf galaxies. These galaxies are much fainter than their high mass counterparts so their stellar populations can’t be sufficiently resolved by current missions. Instead, a lot of recent work in the field focuses on identifying the energetic process a massive black hole undergoes when it accretes gas and dust; the central region of the galaxy becomes an active galactic nucleus (AGN). By identifying the incidence of AGN, a lower limit on the distribution of black holes in dwarf galaxies can be obtained. Today’s authors adopt this approach to further study their black hole population and produce some surprising results.

AGN emit across the electromagnetic spectrum, but today’s authors decide to use centimetre radio emission as they argue it isn’t as strongly extinguished by galactic dust. An initial sample of 43,707 dwarf galaxies were identified in the NASA-Sloan Atlas. To maximise the number of AGN detections, the authors first matched this dwarf galaxy sample to archive data from the Very Large Array (VLA). 111 matches were found in the VLA ‘Faint Image of the Radio Sky at Twenty-centimeters’ survey within 5 arcseconds of the galaxy’s optical centre. These 111 objects were re-observed by the VLA in the A-configuration. In this configuration, the antenna dishes are spread out as widely as possible along each arm of the Y-shape to create a dish with an effective diameter of 22 miles; this allows the authors to take full advantage of the VLA’s high spatial resolution. From this, they were left with 35 dwarf galaxies containing 44 significant compact radio sources.

AGN are not the only objects that can produce compact and intense radio emission, its origin could also point to the births and deaths of stars. Before they could attribute these compact radio sources to AGN, the authors tried to remove the possibility of a stellar origin for this emission.

Areas of a galaxy where large amounts of star formation have taken place, known as HII regions, are dominated by ionised atomic hydrogen. These regions are typically identified by looking for signs of Bremsstrahlung (or braking radiation), emitted when a free electron is slowed down by interacting with the copious amounts of ionised hydrogen present. The authors model the observed compact radio emission as if produced by this process, from which they calculated a ‘thermal star formation rate’. Each galaxy also has a star formation rate taken from the NASA-Sloan Atlas, calculated using the dust-corrected UV light from the whole galaxy. The dark blue and red points in the left-hand panel of figure 1 highlight the 20 radio sources found to have ‘thermal star formation rates’ that are much larger than the star formation rates from the NASA-Sloan Atlas. It doesn’t make sense for a subsection of a galaxy to be producing more stars than are being produced in the whole of the galaxy so the authors can rule out star formation causing emission observed in these 20 radio sources.

Figure 1: Investigating alternative sources of the observed radio emission in each galaxy. The left-hand panel compares the SFR from the galaxy as a whole to that predicted by assuming all the radio emission is from Bremsstrahlung. Any object falling below the dashed line is considered to have emission consistent with star-formation; W49 A is a highly star-forming region of the Milky Way included as a comparison. The right-hand panel compares the expected emission from a population of supernovae to the observed emission. The dashed line describes the supernova luminosity function, with the solid lines describing observed luminosities three times brighter and dimmer than the function. Any object below the upper solid line is considered to have radio emission consistent with supernovae emission.

Since the emission from these 20 radio sources cannot be explained by star formation or supernovae, the authors conclude that they are AGN. Figure 2 shows the positions of 13 of these AGN as red crosses within their dwarf galaxy host. The high spatial resolution of the radio measurement highlights the really interesting result of today’s paper: a number of these AGN are seen well outside the approximate optical galactic centre, indicated by the white circle. Recent simulations predict that roughly half of all massive black holes are expected to be found in the outskirts of their host galaxy. It is believed off-nuclear black holes, such as these, could have been recently stripped from a neighbouring galaxy the host recently interacted with, or perhaps we are seeing the gravitational recoil from two recently merged black holes. 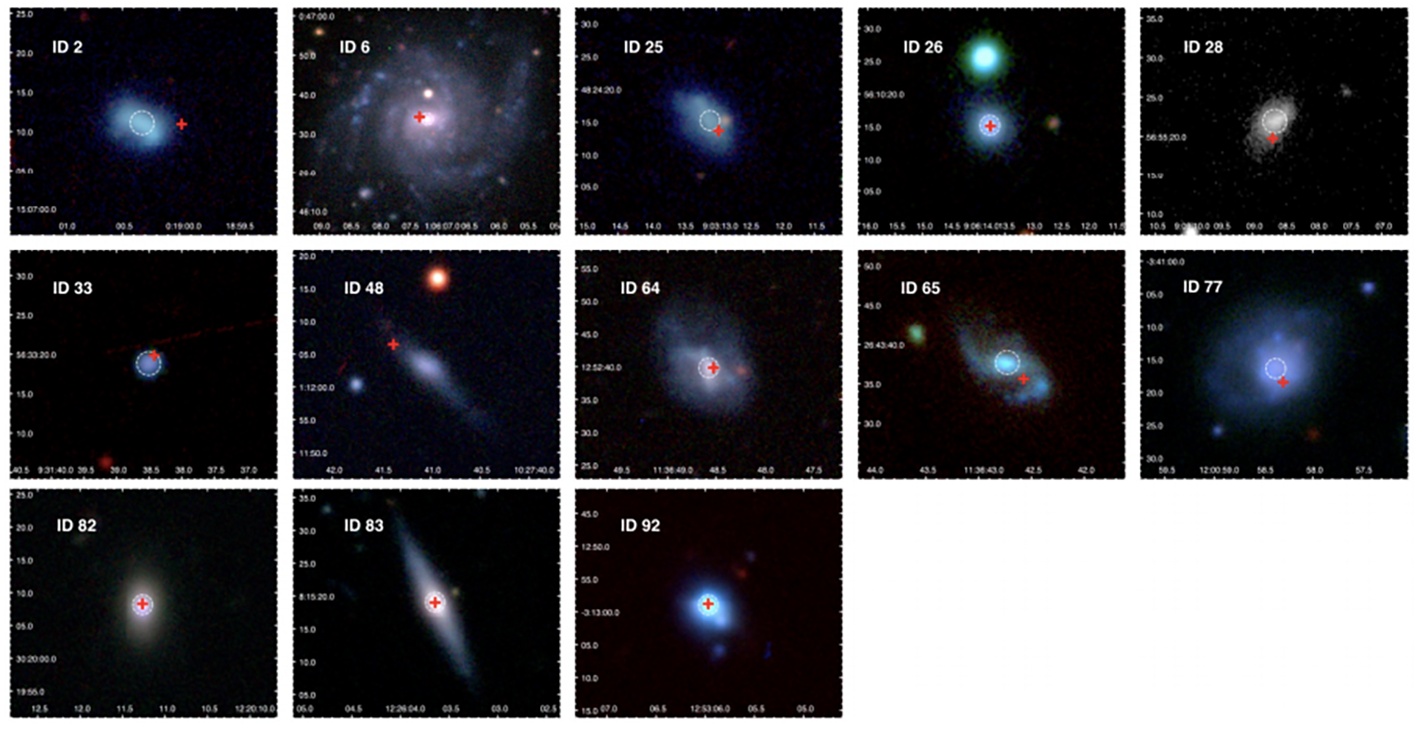 Figure 2: Images of the 13 dwarf galaxies in ‘Sample A’ believed to host radio-selected AGN. The red cross indicates the very secure radio AGN position; the white circle indicates the region measured by the SDSS, thus the galaxy’s approximate optical centre. Only these objects are shown as the remaining 7 objects in ‘Sample B’ did not have a second measurement of mass or redshift from the VLA radio measurement thus the authors were unsure whether to consider them dwarf galaxies.

Detections of AGN, and the black holes powering them, are still rare in dwarf galaxies compared to the near ubiquity identified in high-mass galaxies. Any additional detections are crucial to furthering our understanding of the true distribution of black holes in dwarf galaxies. Where today’s paper has excelled though is by exploiting the high spatial resolution of VLA to identify a population of black holes outside the centres of their host galaxies. Not only is this a surprising observational result but it represents one of the first confirmations of simulations that suggest these massive black holes tend to wander the outskirts of their host galaxies.