This guest post was written by Jillian Hyland for an assignment in the Fall 2018 Foundations of Modern Astrophysics class taught by Professor Cara Battersby. As part of the course, students were tasked with writing an Astrobite-style summary of a topic in astronomy. Stay tuned for more bites in this series!

Jillian is a fourth year undergraduate student at the University of Connecticut. She is studying Physics Education, and plans to become a high school physics teacher after completing the five year integrated Bachelor’s/Master’s program she is a part of. Besides her passion for physics, she enjoys playing basketball and spending time with her family and friends!

Imagine you are a successful and intellectual astronomer. You spend your days mapping the universe and making some of the greatest breakthroughs in stellar classification. Despite this, you receive little to no respect from society and your countless scientific contributions go unrecognized. Does this seem relatable to you? You must be one of the Harvard Computers! 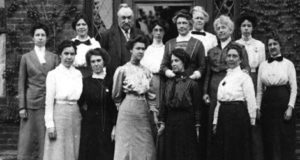 The Harvard Computers. Image Credit: The Harvard-Smithsonian Center for Astrophysics.

Who are the Harvard Computers, you may ask? They were a group of female workers hired by the Harvard College Observatory, under the supervision of Edward Charles Pickering. This group was originally called “Pickering’s Harem”, a name that is offensive and indicates how these women were expected to play a secondary role to their supervisor. While some women, such as Eliza Quincy, volunteered as observers, there were no paid women in the field of astronomy until the Harvard Computers. The first three computers – R.T. Rogers, R.G. Saunders, and Anna Winlock – were hired in 1875. Over the next couple of decades, anywhere from 40 to 80 more women were hired.

Having women in the workplace was not the norm in the 1800s, and this was especially unprecedented in the field of astronomy. The general role of women during this time was to stay at home and care for families. Edward Clarke, a doctor during this time, claimed that “a woman’s body could only handle a limited number of developmental tasks at one time—girls who spent too much energy developing their minds during puberty would end up with undeveloped or diseased reproductive systems.” School at this time was considered too stressful for women; nonetheless, some progressive schools began accepting women, and some schools were even founded just for women, such as Vassar College. Pickering had a need for new astronomers and saw this new influx of educated women in the working field as a frugal way to fulfill that need.

Pickering’s technique for studying the stars was different than that of other astronomers. He worried that by studying stars traditionally, through the telescope, the eye would get tired and measurements would be skewed. Instead, he suggested studying photographs of the night sky, which allowed more direct comparisons, enabling astronomers to more easily determine which stars were brighter. However, with this new technique came mass amounts of new data. Pickering and his current team needed more help. He thought of a brilliant solution: hiring women! Pickering believed that educated women could do the same work, but they were paid the same as an unskilled worker, at about 25 to 50 cents an hour. This was much less than a man, doing the exact same job, a problem many women are still facing today. They worked six out of seven days of the week, and their tasks were extremely tedious. While at first a lot of their work was considered clerical and thought to require less skill, these women went on to accomplish much more in the astronomical field. 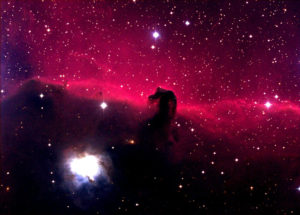 Williamina Fleming, a supervisor of 14 other women in her field, came to be one of the most notable and accomplished computers.  She developed a classification system based on the relative amount of Hydrogen observed in the star’s spectra. She also discovered the first white dwarf star. A white dwarf star is a small but extremely dense star, within which no fusion occurs. They are extremely faint, and are the final step in the evolution of all stars, except the most massive ones. In nine years of work, Fleming was able to catalog 10,000 stars and also discovered the Horsehead Nebula, a dark nebula that exists just south of the easternmost star in Orion. Fleming described this discovery very vividly, and yet on publications, she was barely ever cited. She was finally recognized for her accomplishments, and appointed Curator of the Photographic Plates in 1899, about 20 years after her initial work.

Annie Jump Cannon went on to improve Fleming’s classification system, by producing one herself. The system of classification she developed is still used today. It is based on temperature, and divides stars into their spectral classes, O, B, A, F, G, K, and M. This division was based on the strength of the Balmer absorption lines for each star, which are associated with the temperature of hydrogen, the most abundant element in the universe and the main component of stars. The International Astronomical Union adopted this system as its official classification method in 1922. With this new system, throughout her career, Cannon classified approximately 350,000 stars. In 1938, Harvard finally appointed her the William C. Bond Astronomer, an honor named after the first director of the Harvard College Observatory. Despite this, Cannon’s system of classification is named the “Harvard system of classification”, instead of the Cannon system of classification. Meanwhile, Pickering had several things directly named after him, including the original classification scheme (called the Pickering-Fleming classification system), a series of spectral lines, as well as the original “Pickering’s Harem” name given to the Harvard Computers.This is a clear example of the accomplishments of women being undermined, or not directly attributed to the female scientist who completed the majority of the work.

Henrietta Swan Leavitt also left a lasting impact with her discoveries in astrophysics. During her observations, Leavitt was able to realise that some stars pulsate with consistent brightness. She found that the brighter variables had longer periods, and she found that there was a simple relationship between these Cepheid variable stars and their periods. This was an extremely important discovery, as it gave way to calculating distances across space. Edwin Hubble relied on this discovery to prove that space goes way beyond just our galaxy. Later, Pickering published her work with his name on it; even though she was acknowledged throughout the document, the general public largely credited Pickering and omitted Leavitt’s contributions. The accomplishments of women and minorities are often undermined, thus credit is extremely necessary when credit is due. Otherwise, the public will continue to hold these harmful prejudices, and the necessary change will never occur. (Note: Astrobites has covered two of Leavitt’s key papers on variable stars in this bite.)

Without the amazing accomplishments of these women, astrophysics would not be anything that it is today, and we may have been years behind our current knowledge in the field of astronomy. It is important to actively remember and acknowledge the struggles of the Harvard Computers to ensure that we do not silence women in science any longer. We cannot brush off discoveries, research, and ideas because those making these discoveries may not fit the outdated mold of the “classic scientist”. We must be constantly aware of who we continue to silence, and actively change our oppressive routines. When we ignore marginalized groups, we are only hurting ourselves. When we pursue these changes, our society – and our science too – will benefit greatly.

Communication with Other Intelligent Life

Viability of Inhabiting the Galilean Moons