Title: Sodium Chloride on the surface of Europa

When the Voyager 1 mission first saw the criss-crossed and crater-deficient landscape on Europa (Fig. 1), back in 1979, it was speculated that both of these features indicate a surface that is tectonically active and regularly resurfacing, just like Earth. What did we think was facilitating these processes? A global, subsurface ocean of liquid water underneath the water-ice shell. This was confirmed by the Galileo mission in the 1990s, which detected an induced magnetic field signature close to Europa, consistent with a conducting layer beneath Europa’s surface — like a salty subsurface ocean. This discovery propelled Europa to solar system stardom, and for many scientists (including yours truly) it’s the most exciting place to go to look for life outside of Earth. 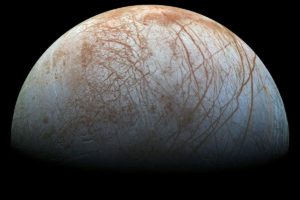 What’s on its surface?

The potential habitability of Europa’s subsurface ocean depends heavily on its composition, which remains largely unknown. Currently, our best window to understanding the composition of the subsurface ocean is to study the chemistry of its geologically young and active surface, especially the disrupted chaos terrains, which are believed to have formed from direct contact with the warm ocean water. The spectra provided by the Galileo Near-Infrared Mapping Spectrometer (NIMS) suggest a surface dominated by water-ice, sulfuric acid, and sulfate salts. The sulfur-based species are not surprising, since Europa is constantly getting bombarded with sulfur ions from Io’s volcanic eruptions. These sulfur ions then undergo reactions with water-ice on Europa’s surface, in the heavy ionizing-radiation environment of Jupiter. The regions experiencing the heaviest bombardment, like the trailing hemisphere of Europa (see Fig. 2), show these sulfur chemistry signatures. On the other hand, recent ground-based infrared observations have suggested that the more pristine material (possibly originating from the subsurface ocean), which are shielded from the sulfur bombardment, might have a chlorine dominated composition. Now, pure chlorides don’t have distinctly identifiable features in the infrared (~ 1000-1500 nm). However, under particle irradiation like what Europa’s surface experiences, they develop distinct features in the visible wavelengths (see Figs. 1-3  here &  Figs. 1-2 here). Using the Hubble Space Telescope (HST), the authors of today’s paper have detected one such feature, the first definitive spectral signature of a chloride on Europa. And not just any chloride, but our favorite salt sodium chloride (NaCl)! 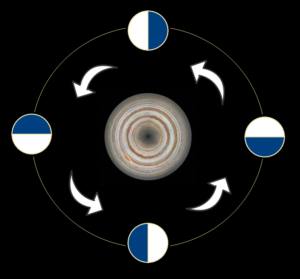 Figure 2. A top-view cartoon of a moon orbiting a planet in an anticlockwise fashion. The white hemisphere, which is in the direction of the orbit, is called the leading hemisphere. The blue hemisphere, which is always on the moon’s backside opposite to its direction of motion, is called the trailing hemisphere. Note that the moon here, just like Europa around Jupiter, is tidally locked, i.e., it completes one rotation around its axis in the same time it completes one orbit around the planet.

Using the Space Telescope Imaging Spectrograph (STIS) on HST the authors obtained the first spatially resolved spectral dataset of the entire surface of Europa, at wavelengths of 300 to 1000 nm. They observed a broad absorption near 450 nm (Fig 3A), which corresponds to absorption by a color center of irradiated sodium chloride, specifically the F-center. A color center absorption corresponds to absorption of light due to individual electrons trapped within vacancies in the crystal lattice, which in this case would be due to the displaced Cl- ions . What’s interesting is that the presence of a color center can cause a material that is usually transparent to become colored, which, in the case of irradiated NaCl, is visually very similar to Galileo’s images of Europa’s surface, especially the chaos regions!

But what about the other color center absorption…?

Irradiation of NaCl actually produces a second, weaker absorption near 720 nm from another color center called the M-center. However, as shown in Fig. 3B, the authors don’t find significant evidence for this feature in their data. To explain this, the authors use laboratory studies where its been observed that under the low radiation flux of Europa, the growth of the M-center band is very slow, whereas its decay is much faster.

Figure 3. HIST/STIS spectra showing (A) a distinct 450 nm spectral feature (the dip with respect to the dashed-line continuum), consistent with an NaCl F-center absorption. The dashed line is a third-order polynomial continuum fit, which is a curve that fits “over the top” of the spectrum. Removing the continuum removes the overall curvature of the spectrum, and normalizes it. The continuum-removed feature is included underneath the spectrum. Overlain in red is a continuum-removed laboratory spectrum. (B) a clear lack of a 720 nm NaCl M-center absorption (Figure 1 from the paper)

Where is the NaCl feature the strongest?

The observed distribution of the potential NaCl F-center feature is in remarkable agreement with the fact that the geologically young chaos regions in the leading hemisphere are heavily irradiated by high-energy electrons (see here) as shown in the map in Fig. 4. This suggests a possible interior source for the NaCl. The authors also examined spectra of several other irradiated salts, but found that none of them were consistent with the observed 450 nm feature. In their words, NaCl provides an elegant explanation for this feature, its geographic features, and the recent ground based IR observations that indicated the presence of chlorine.

The presence of NaCl has important implications for our understanding of Europa’s internal chemistry and its geochemical evolution throughout time. On Earth, extensive hydro-thermal circulation in the seafloor leads to an NaCl rich ocean. Moreover, the plume chemistry of Enceladus, which is perhaps the best analog to Europa, suggests an NaCl-dominated ocean and a hydro-thermally active seafloor. However, the authors caution that the compositional relationship between Europa’s ocean and the fresh, un-irradiated material on the surface is unknown, i.e., we don’t know how well the surface composition reflects the composition of the ocean. Despite our lack of understanding of the relationship between the observed NaCl and the subsurface ocean’s composition, its detection is very significant and provides a new understanding of the geochemistry of Europa.

I am an astronomy PhD candidate at Cornell University. As a planetary scientist, I am interested in analysis/retrieval techniques of the abundant spectroscopic data in the field. Currently, I mostly work on analyzing new (and old) reflectance data of Europa, with the goal of building a comprehensive picture of its surface composition. I also delve into exoplanet transmission data from time to time, where my interests lie in the new and exciting retrieval techniques which exoplanet science is pioneering. Outside of science, I am interested in listening to and playing music, tennis, (the real) football, hiking, museums and historical/archeological tours.