Title:  Distinguishing multicellular life on exoplanets by testing Earth as an exoplanet

The challenge of positively identifying extraterrestrial life has plagued researchers since at least the time of Percival Lowell. Amidst some important contributions to astronomy, Lowell is perhaps best known for incorrectly reporting the presence of “non-natural” canals on the surface of Mars, conflating this for evidence of intelligent civilizations, which are now known (to most of us) not to exist. Yet the possibility of past or even present simple life on Mars and elsewhere remains. If, for example, the 2020 Perseverance rover finds evidence for microbial fossils on Mars, this could suggest that single-celled life is relatively common in the universe, whereas the question of multicellular life remains uncertain. Indeed, our own planet was dominated by simple lifeforms for the first ~4 billion years before the Cambrian explosion. Thus, while inventive techniques are being developed that will one day test for life on potentially habitable exoplanets, there has been little discussion of distinguishing different types of life. Today’s paper tests whether complex, upright organisms like trees could be detected from images of a distant exoplanet, even when that planet can only be seen as a single pixel!

The authors here leverage a relatively simple idea—columnar shapes (like trees) produce shadows that are unlikely to occur on a world devoid of life. Since a planet’s topography rarely includes slopes steeper than 45 degrees (<1% of Earth’s surface), when the sun is very high in the sky (low phase angle for a similarly high-angle observer) there will be little or no shadows. However, since trees extend perpendicular to the surface, they cast shadows under any circumstance where the sun is not directly overhead. Thus, we can expect more of a surface to be shadowed at low phase angles when it is forested—illustrated simply in Figure 1. Furthermore, the authors argue that an erect “tree shape” has evolutionary advantages that have allowed it to develop independently over and over throughout Earth’s history and so should be expected to occur elsewhere in the universe where complex life has developed. 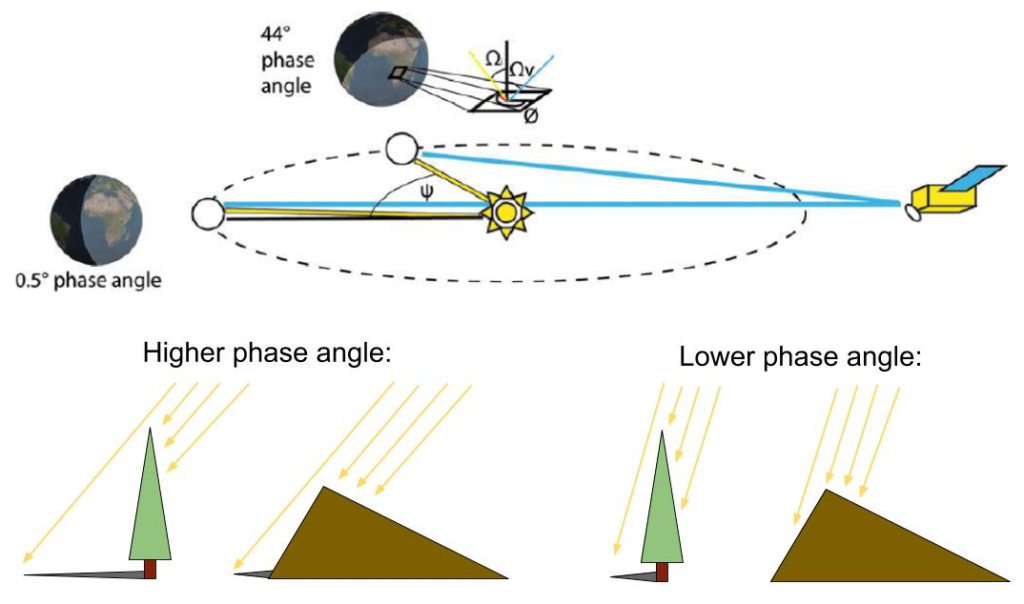 Can we detect life on Earth?

To study whether the shadows of trees can be distinguished from that of common planetary surface features, the authors analyze the reflectance of a field of craters. Since most natural impact craters on Earth have been erased over time by tectonism and erosion, what do we do when we want to mimic a surface like that of the Moon? We use explosions of course! In 1967, the United States Geological Survey blew nearly 500 holes in the ground in a field near Flagstaff, AZ in order to directly replicate the lunar topography for the Apollo astronauts to practice navigating—check out the short video below.

The authors of today’s paper fly a drone to image this cratered surface as well as nearby forest under a variety of lighting conditions to explore the distinction in their measured reflectance. The difference between the amount of shadow at different phase angles (e.g., different times of day) can distinguish abiotic topography like craters from multicellular life like trees (see Figure 2). Of course, we have nothing resembling drone-resolution data of exoplanets, and the first direct images that we get of Earth-sized exoplanets in their stars’ habitable zones will likely consist of only a few pixels. Thus, the authors advance their reflectance study to a more planetary-scale by using POLDER satellite data to look at changes under different phase angles for the Amazon basin, Sahara Desert, all of Earth’s landmass, and the Earth as a whole. In each case the resolution is essentially reduced to a single pixel, as a telescope might see one of our distant neighbors. Perhaps due to gaps in the dataset, the author’s found the phase angle effect to be lower than expected, with only a few percent difference between the Amazon and the Sahara.

Figure 2. Reflectance for a crater (left) and tree (right) at different times of day. Note the crater’s spike in low reflectance pixels in the early morning but absence of that spike later in the day. Meanwhile, the tree retains some shadow under both conditions. Modified from Figures 2 and 3 in today’s paper.

The authors also compare the POLDER data to numerical models of how the Earth would reflect light at different angles with and without vegetation. This change in reflectance with different viewing and illumination angles can be described by the bidirectional reflectance distribution function (BRDF). The empirical POLDER data is plotted atop this data in Figure 3, along with the reflectance for various other planetary bodies. The authors expected their measurements of Earth to plot somewhere between Venus and Mars—that is, somewhat Mars-like topography, but with an atmosphere. However, the empirical data most closely matches the reflection modeled for Venus, perhaps due to their missing data for the very lowest phase angles and their simulations failing to accurately model the complicated effects of Earth’s atmosphere and oceans.

Attempting to view the Earth as an exoplanet, the authors note the difficulty of using their method in comparison to something like the Normalized-Difference Vegetation Index (NDVI), which ratios wavelengths of reflected light to detect chlorophyll—an approach that would presumably require adjustment for the properties of a given planet and host star. With improved models and datasets of BRDF, a world lightyears away covered in high-NDVI, low-profile slime mold could be distinguished from a planet with high-NDVI, three-dimensional forests of multicellular life. Although the results of this study require further refinement, this work highlights early steps toward a unique approach for not just life detection but even distinguishing possible types of life. Creative, independent methods like this will be necessary to reach anything resembling a conclusive remote detection of extraterrestrial life.