Title: GW190412: Observation of a Binary-Black-Hole Coalescence with Asymmetric Masses

The latest pair of merging black holes announced by LIGO-Virgo, the first made public from their latest observing run, is unlike any seen before 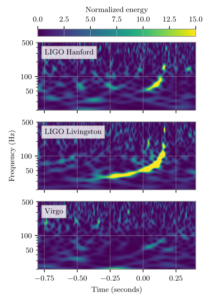 Figure 1: The characteristic GW ‘chirp’ arises as the two black holes – not very good at practicing social distancing – spiral inward faster as they emit gravitational radiation and move closer. This increases the frequency of radiation emitted with time.

It’s hard to believe that over five years have passed since the first detection of gravitational waves (GWs) by LIGO. The once unimaginable feat has now become routine with advancements in detector technology and the joining of Virgo, the European gravitational-wave observatory. Together over the past year, they have issued public alerts for a total of 56 detection candidates in their third observing run (O3), which was suspended one month prematurely due to COVID-19.

There is reason to remain excited, however, as the collaboration has started rolling out results from the observing run following detailed analyses. One of the first announcements, GW190412, was made at the recently concluded APS April virtual meeting, and has the following unique features:

The black holes in all binary black hole mergers heard by LIGO-Virgo in their first two observing runs were of comparable sizes, with the ratio of the mass of the lighter black hole to the heavier one being close to 1. However, in GW190412, the mass ratio is significantly skewed, with the heavier black hole weighing around 30 solar masses, and the lighter one around 8 solar masses. Figure 2 shows the probability distribution of the mass ratio (q) for the binary along the x-axis.

2) Spin of the heavier black hole

Matching the data with sophisticated template waveforms not only tells us how the two black holes warped spacetime fabric as they merged, but also whether they were spinning and swirling it while doing so. This is the first time LIGO-Virgo has detected a characteristic non-zero spin in the system. Figure 2 shows us the inferred effective spin parameter for the binary on the y-axis: it is a combination of the individual spins of the black holes, weighted by their masses. In this case, since one black hole is significantly heavier, we can conclude that it carries much of the spin. 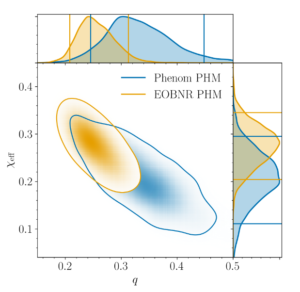 Figure 2: The inferred mass ratio and effective spin of the GW190412 binary merger. ‘Phenom PHM’ and ‘EOBNR PHM’ refer to two different ways in which the binary is modeled to recover its parameters from the data, with PHM noting the use of Precession of the black holes, and Higher Order Modes in the waveform for both. The fact that they give slightly differing inferred parameters highlights the difficulty in simulating complex mergers.

Black hole binaries with symmetric masses evolve in a well behaved way: every time they complete half an orbit, the picture looks symmetric. As a result, the gravitational wave emission occurs at a frequency that is two times the orbital angular frequency.

With lopsided black holes, instead of orbiting around a fixed point, the heavier black hole loops around in a small circle, around which the smaller black hole revolves. This leads to gravitational radiation emitted at higher frequencies, forming higher-order harmonics, or overtones. In this case, the data analysts could clearly identify the next prominent harmonic of the signal, which was three times the orbital frequency.

Musicians will identify that two notes occurring at a frequency ratio of 3:2 form a harmonious musical interval. Far from resulting in a jarring knockout, this clash between a super-weight and straw-weight had composed a perfect fifth for the spacetime symphony.

Systems radiating detectable gravitational waves help us study the predictions of general relativity in regimes of extremely strong gravity, where the fabric of spacetime gets warped to the greatest extent. An esteemed theorist, even Einstein would have gleamed with excitement at the prospect of playing around with different sizes and configurations of artificial black holes in a lab. While that is clearly impossible, we let nature run the experiments and build giant interferometers like LIGO and Virgo to tune in to the results. Each new event adds rich information to our knowledge of the population of these binaries in our universe and the rate at which they merge.

Since an asymmetric merger like GW190412 is unique (as of now), it tells us how the probability of two compact objects depends on their mass ratio. Opposites do not seem to attract in strong regimes of gravity, but this single event has already updated our understanding from the first two observing runs, which saw none. It also makes us ponder over how this binary got together in the first place: did it evolve in isolation, with each star collapsing into a different-sized black hole? Or did it form due to black holes in a dense stellar environment getting caught up together? The latter dynamical formation scenario is good at explaining binaries even more lopsided than GW190412 (mass ratio 1:10 or less), but this event does not definitively point towards either formation process. The spin of the larger black hole also suggests that it might have been formed as a result of the merger of two smaller black holes itself, pointing towards dynamic interactions. The presence of higher-order harmonics in GW190412 can fine-tune our tests of general relativity, and help us infer binary parameters with greater accuracy.

There’s just so much science coming out of this single event. If you have more appetite for it, check out LIGO physicist Christopher Berry’s full-course serving here (spoiler: the entree is…Oreos). I wonder what’s hiding in the other 50+ events to be announced in the near future!