Title: The role of Galactic HII regions in the formation of filaments: High-resolution submillimeter imaging of RCW 120 with ArTéMiS

This entire story begins with an O-type star: a star so massive and bright that it radiates enough energy to ionize a bubble of Hydrogen around it. Scientists have long hypothesized that ionized Hydrogen (HII) regions like this bubble can trigger supersonic compressions on the outer surface of their shell, creating filamentary structures of denser material that then condense to form stars. These filaments are especially good at forming massive stars, possibly because they create the necessary conditions to increase high mass star formation efficiency. The authors of this paper wanted to explore the effects of HII regions on creating filamentary structure and triggering star formation, so they dove into the tale of RCW 120, an HII region with dense structures along its outer edge.

To get a clear view of RCW 120 and its surroundings, the authors combined images from the ArTéMiS camera on the Atacama Pathfinder Experiment and the Herschel HOBYS key project, all taken at submillimeter wavelengths to illustrate the radiation coming from dust. The result is shown in Figure 1, where it is overlaid with filamentary structures traced in white, red, and purple. The structures were determined using algorithms specifically designed to find filamentary shapes in images. Figure 1 also displays the young sources identified by Herschel in black circles, which indicate star formation spread across the filaments but primarily located in the densest parts of the shell. 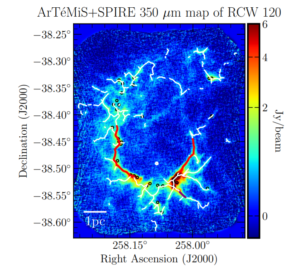 Figure 1. The RCW 120 region, with overlaid filamentary structure. The small central white circle represents the ionizing O-type star, and the white lines trace all of the filamentary structures that were identified in the image. The red lines trace filaments to the east and west of the star. The purple line traces a filament pointing radially out from the star. Black circles represent star forming regions. See Figure 2 in the paper.

With their newly identified filaments, the authors explored trends across the surface of the HII bubble. Using the red outlined filaments in Figure 1, they investigated the average change in intensity across the edge of the bubble on its east and west side. The results are shown in Figure 2. The left panel shows the east side of the bubble, while the right panel shows the west side. You can imagine the ionizing star as residing in between these two plots. Each profile is distinctly asymmetric, demonstrating a much steeper slope in intensity on the side closer to the inner star. This steeper change in intensity likely stems from a uniform compression across the HII bubble as it expands into space.

Figure 2. The average intensity of the red filaments in Figure 1 as you move out from the inner star towards the east (left) and west (right). The peak intensity occurs at the center of the dense filaments. Notice that the profiles are similarly asymmetric, indicating a uniform compression along the HII bubble as it expands. See Figure 5 in the paper.

The authors also explored a filament that runs radially outward from the ionizing star (the purple filament in Figure 1). Unlike the filaments in Figure 2, this filament appears to have a symmetric peak in intensity, and is therefore not experiencing any compression. This seems to make sense: because the filament is not oriented to face the expanding HII region, it doesn’t experience the same compression force that the other filaments do.

Additionally, this paper investigated the structure of the HII bubble. By comparing their intensity plots like the ones in Figure 2 to models of a spherical shell, the authors were able to determine that the spherical model shows too high of an intensity inside the bubble and too low of an intensity outside the bubble to explain the structure that we see in RCW 120. The authors thus conclude that this HII region must be a 3D ring instead of a spherical shell.

By fitting the intensity profile across each filament, the authors found a full-width half-maximum value of 0.09 pc on average. This value is interesting because it agrees with measurements of the width of other filamentary structures in both low and high mass star forming regions. That means that these filaments probably all form the same way, despite their differences in forming stars!

The compression from the bubble indicates an increase in density at its edge, and more dense material means better conditions for star formation. Not only this, but the Herschel young objects in Figure 1 show us that star formation is actually occuring in these pockets! This gives us lots of insight on what is going on around RCW 120. First, a bright, massive star ionizes the Hydrogen around it. That HII region expands and creates dense filamentary structures at its edges that then collapse and start forming stars. The authors have provided a strong example of the effect that an HII region can have on filaments and have established another link between HII regions and star formation.