Your Protostar Has Been Delivered

Protostars are not quite stars– they have not finished collapsing from a molecular cloud into a hydrogen-burning star. They are, however, a very interesting stage in a star’s life. Protostars are accreting material, building their mass so that at some point they have enough gravitational energy to begin to fuse hydrogen into helium. Protostars gather more mass as material gets pulled in from their outer envelope. The gas and dust gets sucked in by gravity and forms a rotating disk around the protostar, from which it both grows and sometimes ejects material in an outflow. Figure 1 shows the structure of a protostar from Tobin et al 2012. 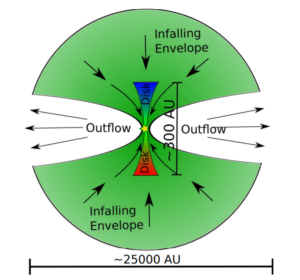 Figure 1. Cartoon of a protostellar system from Tobin et al. 2012. Protostars have an infalling envelope of less dense material and a rotating accretion disk of denser material closer in. They also have outflows of ejected material. The blue and red colors of the disk represent the Doppler shift that comes as a result of disk rotation.

Protostars are an important phenomenon to study because they help us understand the conditions occurring during star formation. Today’s paper analyzes the magnetic field and dust properties in 10 protostars.

The author’s of today’s paper used measurements from the Atacama Large Millimeter Array (ALMA). They looked at the continuum emission around the protostars that stems from the thermal radiation of dust at 870 microns. They also made polarization measurements across the disks and envelopes of the protostars, as it can provide information about magnetic fields and the size of the dust.

Polarization arises because interstellar dust emits more light along one of its axes than the other. Dust is often elliptical in shape (think like a football or an egg) and is present in the envelope and disk of protostars, as well as many other astronomical environments. Interstellar dust tends to align its long axis perpendicular to a magnetic field. Because there is then more surface area perpendicular to the magnetic field, the dust emits more radiation in that direction. The difference in radiation in each direction provides a polarization magnitude and angle.

The envelope component of the protostars is quite the opposite- it appears more complex and disordered. Polarization (and therefore the inferred magnetic field) seems to vary with the structure of the protostar’s envelope. The magnitude of polarization is also much higher than that in the disks. These aspects are also shown in Figure 2 in the more extended regions of the protostars, where the flux is lower and the image fades to the blue region of the scale. 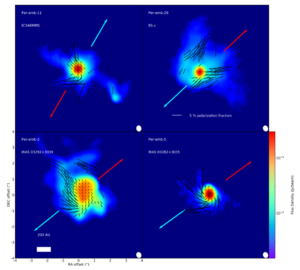 Today’s paper demonstrates that the structure and properties of protostars vary as you move through their disks and envelopes. By providing a clearer picture of the composition of protostars, this result will hopefully allow us to turn a new page on our understanding of the star formation process.