The answer: not much at all – they can be nearly perfect spheres! A new paper by the LIGO-Virgo collaboration presents the latest results of the search for continuous gravitational waves from their third observing run (O3).


Title: Gravitational-wave constraints on the equatorial ellipticity of millisecond pulsars

Status: Submitted to The Astrophysical Journal; Available on ArXiv

Neutron stars represent one of matter’s weirdest manifestations. With a mass little more than that of the Sun packed into a big city, getting to know their size, shape and structure can unlock the most fundamental questions in atomic physics. What makes up a neutron star? Are they rigid or squishy? Are they perfectly spherical? If they have deformities, what is the tallest ‘mountain’ they can support?

The first direct detection of gravitational waves by LIGO in 2015 gave us one of the best tools for studying neutron stars. Gravitational waves are radiated whenever matter moves in an asymmetric manner, which changes its quadrupole moment with time. For us to be able to detect these waves, they need to emanate from such motion of extremely massive and dense matter. The first detection was radiation from a pair of black holes spiralling into one another. Since then, most of the gravitational wave events heard by LIGO-Virgo have been black hole binaries.

However, one might argue that neutron stars are much more diverse and interesting gravitational wave sources. The first confirmation of the existence of these waves was provided by the Hulse-Taylor binary: a system featuring a pulsar (a rapidly rotating neutron star giving off radio pulses) orbiting another neutron star. This week, we just passed the third anniversary of GW170817, an event where for the first time, LIGO and Virgo “heard” two neutron stars colliding. The collision resulted in a kilonova explosion that was observed using electromagnetic telescopes.

Neutron stars can exist in pairs and do the tango like the binaries mentioned above, but the cool thing is that they can also radiate gravitational waves while being single!

Any physical deformation, like a ‘mountain’ on the neutron star crust will give rise to a large quadrupole moment since they rotate extremely fast. The particular kind of neutron stars studied here are called millisecond pulsars: entire stars which complete one rotation within a few tens of milliseconds, much less than the blink of an eye. Even if the pulsar were perfectly spherical on the outside, it may have internal deformities in its core – something very little is known about. Or, it may be slightly elliptical in shape and wobble asymmetrically as it spins, giving rise to gravitational wave radiation.

All of the above mechanisms of lone neutron star gravitational waves have a tantalizing characteristic: their frequency is almost entirely constant. This is because it is determined by the frequency of rotation of the neutron star. These gravitational waves are hence known as ‘continuous’ waves, distinguishing them from the transient, ‘chirping’ waves given out by colliding binaries.

The search for continuous waves from pulsars is promising because data analysts know which frequencies to dig out from the data for the pulsars that astronomers have already seen through radio telescopes. This enables targeted searches for known millisecond pulsars in LIGO and Virgo data (Figure 1). 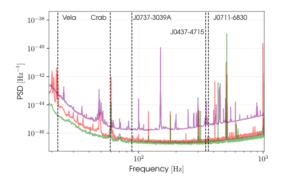 Figure 1: The gravitational wave frequencies (dashed vertical lines) of known pulsars used in this search, compared with the Power Spectral Density (PSD), also known as the ‘noise bucket of sensitivity’ of the LIGO and Virgo gravitational wave observatories. The spikes in the PSD correspond to known continuous noise sources, such as the 60 Hz. power line in the US. Can you see why it is such a nuisance for the Crab pulsar? Figure 1 in the paper.

The third observing run of LIGO-Virgo did not detect continuous waves from any pulsar directly. The downside of continuous wave searches is that the expected strength of these gravitational wave signals is far less than those from compact binary mergers. Assuming that continuous waves are constant in frequency, only long stretches of data spanning several years can build enough signal above the noise threshold. However, even a non-detection can tell us a lot about what the structure of the pulsar is (or more importantly, isn’t!)

It isn’t quite true that rotation speeds of pulsars are absolutely constant. Indeed, if an elliptical, wobbly pulsar radiates gravitational waves, it would invariably lose energy and slow down (called “spin-down”). Other factors, like magnetic fields or internal dynamics can dominate this slowing down process as well. Pulsar spin-down has already been measured, but it takes place over very long timescales, effectively keeping their frequency constant over the period of a LIGO-Virgo observing run. 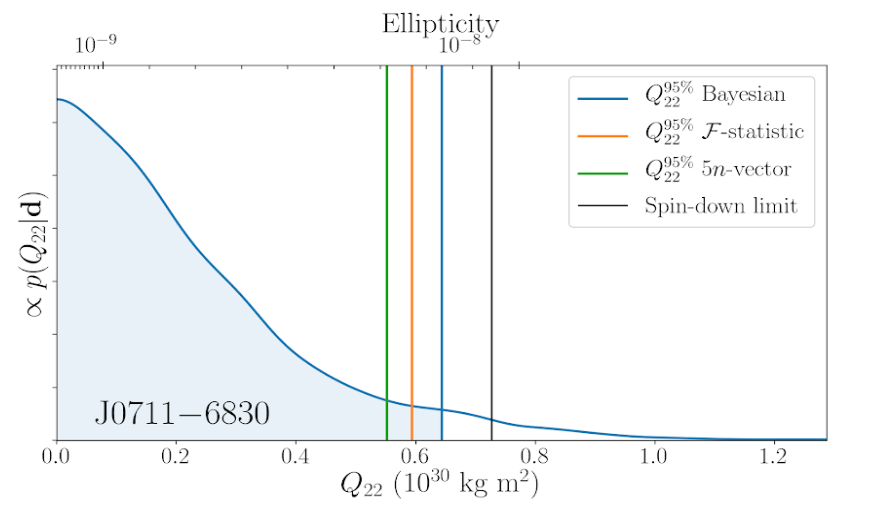 Figure 2: Constraints on the mass quadrupole moment Q22 and ellipticity for two of the pulsars in the study. The area under the curve between two values of quadrupole moment is the probability that the true value lies within that range; smaller values imply increasingly perfect spheres. The black vertical lines represent the spin-down limits for each pulsar, and the colored vertical lines correspond to the 95% degree of belief that the ellipticity is below a certain value. When the upper limit measurements (colored vertical lines) of the quadrupole moment (or ellipticity) lie to the left of the black lines, it means that the spin-down limit has been surpassed. Figure 2 in the paper. Ref: https://www.ligo.org/science/Publication-O3aMSPs/index.php

For the very first time, LIGO and Virgo achieved a level of sensitivity that enabled them to detect possible signals from the pulsar J0711–6830 weaker than its known spin-down limit (Figure 2). That means the authors could constrain its ellipticity or limit the size of its mountains to a greater extent than previous observations. As a result of not detecting any gravitational waves, we now know that this pulsar is less deformed from a perfect sphere than the width of a human hair!

Before Galileo pointed his telescope towards it, most scientists believed that the Moon was a perfect sphere. It is fascinating today to be able to correctly identify perfect spheres over a hundred times smaller than the Moon, situated over 300 light years away from us.