Note: The title of this article has been changed from its original version. Please see our explanation here.

Title: The Role of Active Galactic Nuclei in the Quenching of Massive Galaxies in the SQuIGGLE Survey

To butcher an apocryphal quote about cars, galaxies can be any colour, as long at its red or blue. If you were to plot the magnitude and colour of a large sample of galaxies you would see that they fall into two groups: one is actively star-forming and filled with young blue stars, the other has long since finished making new stars so is left with only the older, redder populations. Between these two monolithic groups, however, there is an elusive class of galaxies. Post-starburst galaxies (PSBs) are objects which are thought to have had large amounts of star-formation shut off very rapidly in a quenching event. This short time period means that PSB samples are generally quite small, so the origins of quenching are still quite uncertain. However, studying PSBs is still thought to be the best route to understanding what causes galaxies to transition from blue to red.

Today’s authors are looking inside the galaxy for their quenching trigger. They focus on the galaxy’s central supermassive black hole. Emission from active galactic nuclei (AGN) are thought to inject huge amounts of energy back into their host galaxy. Such huge injections are believed to either create strong winds that eject star-forming material from the host galaxy or heat the gas so much as to prevent it cooling and collapsing to form new stars. Today’s paper searches for signs of nuclear activity in a sample of PSBs to see if AGN could be responsible for their quenching.

Connecting the Dots with SQuIGGLE

The authors showcase a brand-new galaxy survey dedicated to studying quenching activity at intermediate redshifts. The ‘Studying of Quenching in Intermediate-z Galaxies: Gas, anguLar momentum and Evolution (SQuIGGLE) survey’ contains thousands of massive galaxies found in SDSS DR14. From this survey they use 1,207 PSBs at redshifts between 0.5 and 0.94. In addition, they construct a separate sample of galaxies in a similar mass and redshift regime from the LEGA-C survey to act as a comparison.

AGN in this sample are identified in the optical part of the spectrum. This is typically done using the BPT diagnostic, where two optical emission lines ratios are compared to distinguish between AGN and star-formation being the primary source of ionisation. Due to their high redshift, however, some of the emission lines used in the BPT diagram do not appear in this sample’s spectra so one of these ratios is unusable. Instead, the authors turn to the Mass-Excitation diagram which is based on the BPT diagram but replaces the lost emission line ratio with stellar mass. Enhancement of remaining BPT ratio, called the excitation axis, can be caused by lower metallicity but this only occurs in lower mass galaxies, as they typically host younger stars. Given these are fairly high mass galaxies, we know that their metallicity is higher, so any increase in the excitation axis is due to AGN activity. This means the authors can define AGN by looking for enhancement in the excitation axis within these relatively high mass galaxies. Alongside this, they also apply a spectral signal-to-noise threshold to make sure these excitation detections are real.

These results are broken down further to identify how trends may vary with host galaxy properties. Most interestingly, they look at how AGN fraction varies with stellar age, measured using a quantity called the 4000-angstrom break (Dn4000). It gives us an indication of the relative contributions made to a galaxy’s spectrum by the shorter-lived, blue stars and their longer-lived red counterparts. Once quenching has occurred, Dn4000 increases as the short-lived, blue stars start to die and cannot be replaced, leaving behind only longer wavelength emission from red stars. Figure 1 shows the results of this breakdown of AGN fraction with galaxy age.  It clearly shows that younger PSBs have an extremely enhanced AGN fraction compared to older ones: AGN are ten times more likely to appear in the youngest PSBs! 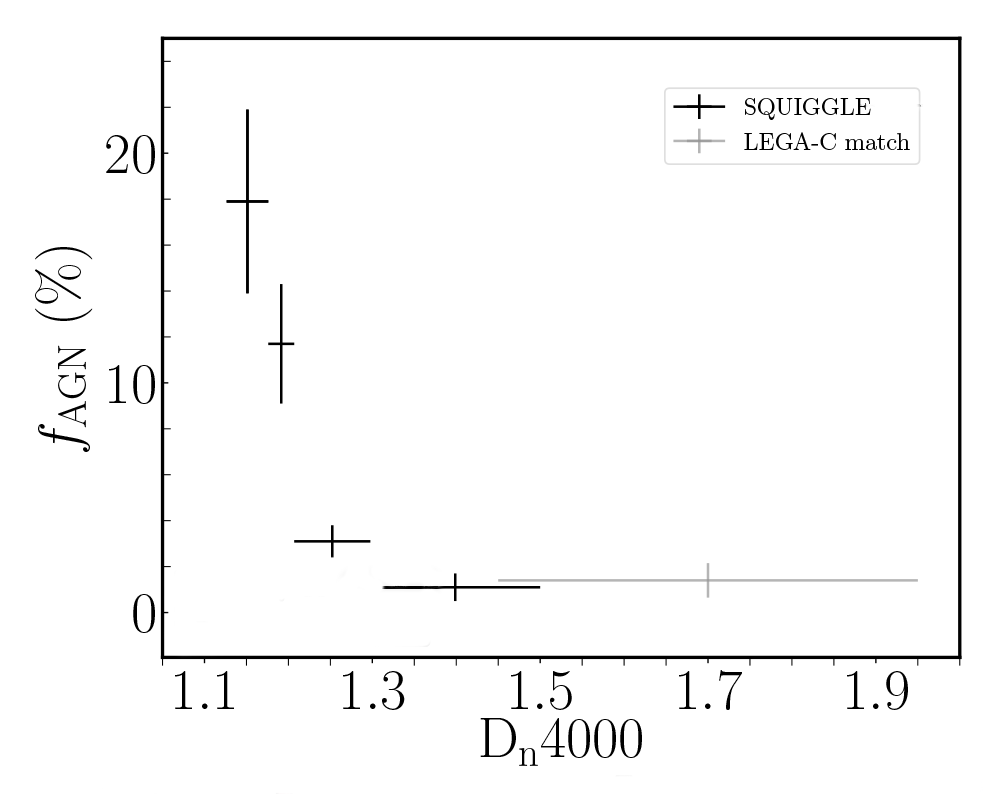 Figure 1: Comparing the AGN fraction as a function of galaxy age for the PSBs (taken from SQUIGGLE) and the normal galaxy sample (taken from LEGA-C). Dn4000 (4000-angstrom break) describes the age of the galaxy, with a higher Dn4000 corresponding to an older galaxy. Adapted from figure 3a) in the paper.

AGN fractions appear to peak around the time of the quenching event where AGN-driven winds could force gas out of the host galaxy. In doing this, the AGN also removes sources of future fuel, causing the large drop in AGN fraction as the galaxies get older. Such a strong correlation between AGN fraction and the galaxy’s age suggests AGN activity could play a role in quenching galaxies. Whilst this correlation is compelling, it isn’t definitive. This makes the follow-up work being done by the authors all the more important: they are searching these AGN for signs of outflows, which, if found, would suggest that star formation really is quenched by AGN-driven winds.