An Uncertain Future for the Night Skies

As recently as a hundred years ago, the Milky Way was visible from outside most cities. As electric lighting became cheaper and more common, light pollution made it impossible to see features of our galaxy from all but the most remote locations, which today are home to the largest telescopes. The advent of inexpensive LEDs in the past two decades has made bluer street lamps and household lighting more common, leading to further reductions in sky visibility hundreds of miles from major metropolitan areas. And now, the dark skies are being illuminated from above. Since May of 2019, SpaceX has launched more than 770 Starlink satellites at a rate of roughly 60 per month, and these are some of the brightest satellites in orbit. Over the next 5-10 years, we may experience a 30-fold increase in the number of satellites like those of Starlink. If these plans come to fruition, it’s possible there will be more satellites visible by eye than stars, and our view of the night sky will be changed across the world.

So what is the plan with these satellites, what should we expect to happen, and when? Is there a cause for concern for ground-based astronomy, and what might researchers and the private industry do to mitigate problems? Here we hope to provide concise, fact-based answers to these types of questions. 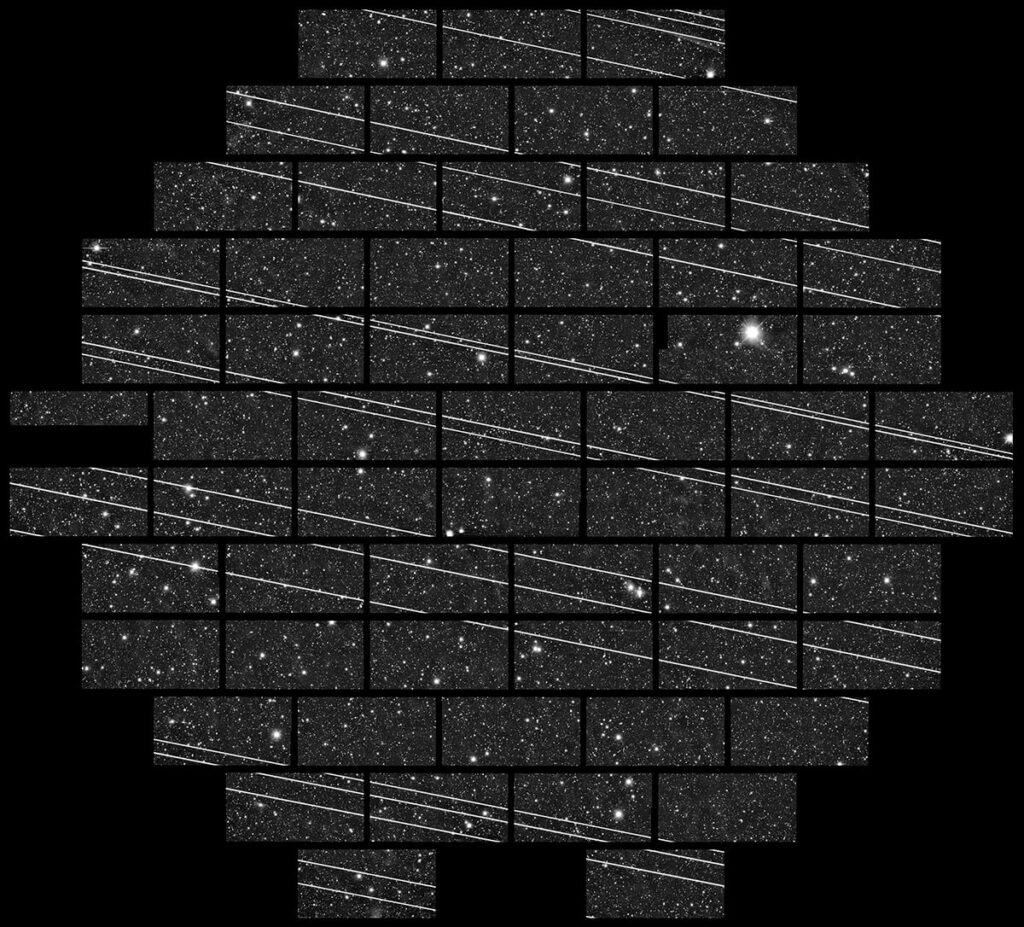 Figure 1: Starlink satellites have been found in images taken by observatories across the world like the one above. This image, showing a fleet of Starlink satellites passing overhead, comes from Cerro Tololo, Chile, the home of more than a dozen professional telescopes. Credit: NSF’s National Optical-Infrared Astronomy Research Laboratory / CTIO / AURA / DELVE.

What exactly is happening, and why?

Across the next decade, numerous private industry companies (including SpaceX, Kuiper Systems by Amazon, Samsung, and Boeing) each plan to launch between several hundred and several thousand satellites into “low Earth orbits” (LEO). Satellites in LEO orbit at an altitude of less than ~1000km. Though there are currently some 11,000 artificial satellites in LEO, the majority of these objects are small debris orbiting at altitudes greater than 600km. Starlink satellites, on the other hand, make up the majority of large objects (> 100kg) orbiting below 600km. Because of their low orbits and their sizes, most of these satellites are bright enough to be seen by the naked eye. Each set of satellites will form “megaconstellations,” harmonized groups of satellites working together to accomplish the same goal. There are a number of motivations for placing several thousand satellites into LEO, but the majority of these companies seek to provide high-speed, low-latency internet across the world. At LEO, satellites circle the Earth about once every 90 minutes, meaning they have little time to communicate with facilities on the ground. Only a megaconstellation of satellites can provide consistent and uniform communication to populated areas across the Earth.

These types of services accomplish many goals. On the one hand, services like these may be the only means for some rural areas to obtain quality internet access. Indeed, according to the FCC, tens of millions of Americans are without access to broadband internet, and in 2017, the UN reported that the majority of the world lacked access to broadband (most notably in Africa and Asia). The communication business is also lucrative. According to SpaceX CEO Elon Musk, “Total internet connectivity revenue in the world is on the order of a trillion dollars, and we think maybe we can access about 3 percent of that, or maybe 5 percent.” At the moment, it is not clear how expensive these services will be, though the claim is that they will be competitive with current internet providers.

To date, SpaceX is leading the race to populate LEO with satellites, having successfully launched several hundred. Future scheduled launch dates include the end of September and October. The company plans to offer service to the Northern U.S. and Canada by the end of 2020, expanding across the world in 2021. Furthermore, there is no end in sight, as the FCC has approved 1 million Starlink ground stations for communication, and more than 700,000 Americans are subscribed to Starlink’s web-updates.

Satellites in LEO are nothing new, but their impact on astronomy depends on how bright they are. Starlink satellites now make up the majority of LEO satellites, as shown in Figure 2, and all of those that have been launched to date are visible by eye (between 3rd and 7th magnitude, and as bright as 1st magnitude immediately upon launch). Depending on a location’s latitude, time of year, and time of night, several hundred LEO satellites may be overhead at once, potentially visible by eye. Any object this bright is easily detected by even moderate telescopes with the shortest exposure times: images of the night sky, like Figure 1, may soon become filled with LEO satellites.

Figure 2: Number of objects orbiting Earth at altitudes between 200 and 600 km as a function of time. The majority of large objects (right) are visible by eye. In teal, the contribution of Starlink is shown. Since the creation of this figure, ~400 more Starlink satellites have been launched, and these are now the most numerous large satellites at these altitudes. Credit: Fig. 3 of McDowell et al. (2020).

Fortunately, mitigating the effects of LEO satellites is a priority for the forerunner in this space-race, SpaceX. Musk has previously claimed “[We are] confident that we will not cause any effect whatsoever in astronomical discoveries. Zero. That’s my prediction. We’ll take corrective action if [the impact] is above zero.” However, achieving this admirable goal will require successful strategies that darken the current satellite design dramatically, as current Starlink satellites are already bright enough to disrupt basic observations. Two methods under consideration are meant to darken the Starlink satellites and are currently being tested. The first includes darkening the satellite to reduce reflectivity (DarkSat), while the second option includes a sun-shade to reduce illumination of reflective components (VisorSat). A prototype of the former has already been launched, but astronomers have determined it to be only a factor of 2 fainter than the original Starlink satellites. The DarkSat is just barely too faint to be seen by eye but is still easily bright enough to disrupt observations. To address these concerns and collaborate on methods for further mitigation, both the American Astronomical Society and International Astronomical Union have established working groups which actively communicate with SpaceX. This is still a work in progress, though both sides have expressed optimism. You can follow their updates here.

The area of astronomy most systematically affected by the presence of numerous LEO satellites will be survey-type missions from the ground which repeatedly image large areas of the sky. The foremost example of this type of work is the Legacy Survey of Space and Time (LSST) to be carried out by the Vera Rubin Observatory. Each night for ten years, astronomers will use the Rubin Observatory’s incredible camera (with a ten square degree field of view!) to take 1000 images of the entire sky visible from Cerro Pachón in Chile. A single 30-second exposure with this camera reveals objects 20 million times fainter than can be seen by the human eye, i.e., 20 million times fainter than LEO satellites like Starlink.

Recently, a team of astronomers investigated the potential impacts of LEO megaconstellations on the science goals of LSST. In this work, the team considers modifying the LSST observation scheduling algorithm to avoid LEO satellites, simulates the effects of satellite trails on the science camera, reports on observations of current Starlink satellites, and discusses further challenges in need of consideration. Figure 3 shows the expected streaks across the sky that a megaconstellation of 48,000 satellites would produce above Chile in 10 minutes. Below are the main takeaways of their analysis, assuming  the satellites are as bright as Starlink has been so far.

The team concludes there are numerous problems posed by LEO satellites for LSST’s mission, though the many can be alleviated if the satellites are faint enough (> 7th mag). The authors write, “The science community may have to do some amount of extra work to reach the promise of using LSST to discover the unexpected. There may be cost and schedule impacts, and the presence of LEOsats may require LSST to run for longer than ten years to achieve all science goals.” 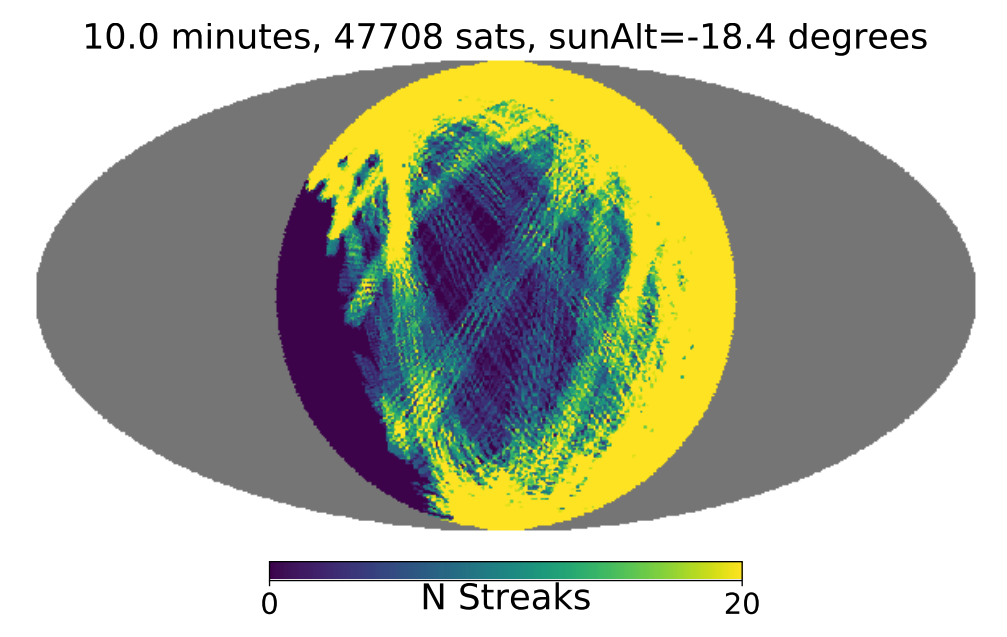 Figure 3: Predicted sky map above Rubin Observatory illustrating the number of satellite trails by a megaconstellation of 48,000 LEO satellites. This prediction is for a randomly chosen date (Oct. 11, 2022), just after twilight. An incredible amount of trails are created in only 10 minutes of the simulation. The dark spot is caused by Earth’s own shadow. Credit: Fig. 3 Tyson et al. (2020).

It is perhaps not much longer a clear night sky will be filled with stars and the inner planets rather than human-engineered satellites. For better or for worse, the future of the night sky seems destined to change. There are no guarantees that other companies will attempt to darken their satellites in the way SpaceX has, and it is not clear how many LEO satellites may eventually be functioning at one time.

However, advancements in astronomy have not come in spite of technological advances, they’ve been made because of them. Light pollution has already rendered most observatories in the American Northeast obsolete, but today we use remote observing to connect to state-of-the-art observatories across the globe, as will be the case with the Rubin Observatory. Furthermore, technological advances have made surveys such as the LSST, unimaginable decades ago, a real possibility today. Seeing through the atmosphere has always been a resolution-limiting feature, so space agencies like NASA and ESA have launched telescopes into orbit and are following up with the next generation of space-based observatories, including the James Webb Space Telescope, the Nancy Grace Roman Space Telescope, and Euclid, to name a few.

The future of the night skies is uncertain but the future of astronomy is not: the new challenges posed by Starlink and other megaconstillations will require collaboration and innovation to overcome, but ultimately will not impede astronomers’ quest to study the cosmos.

NASA abstract service search for works with “starlink” in the title

NASA on the “LEO Economy”

Why Save the Sky?