WARNING: Too much radiogenic heat could hurt exoplanet habitability

Title: Radiogenic Heating and its Influence on Rocky Planet Dynamos and Habitability

Rocky planets are thought to start as hot masses of material accreting from a disk of gas and dust around their young host star. Whereas the primary heat source early on comes from accretion, and orbital dynamics can lead to further heating through tidal squeezing, the ongoing thermal evolution of many rocky planets is likely controlled by radiogenic heat production. In particular, the radioactive isotopes of uranium (U) and thorium (Th) have long half-lives and so may be significant in deciding the long-term geodynamic history. The authors of today’s bite argue that the exact concentrations of such elements in a planet’s mantle could decide the presence and strength of that world’s magnetic field.

Dynamo theory holds that magnetic fields are generated by circulation of conductive fluids. In the case of Earth, convection of hot liquid metals in the outer core may be generating our magnetic field (see Figure 1). This outer core dynamo shuffles heat outward from the planet’s interior and its efficiency is controlled by the temperature of the overlying mantle. Thus, our magnetic field can be linked to heat production in the mantle that is mainly due to the decay of radiogenic elements. But what would it mean if our planet happened to have more or less of these elements? 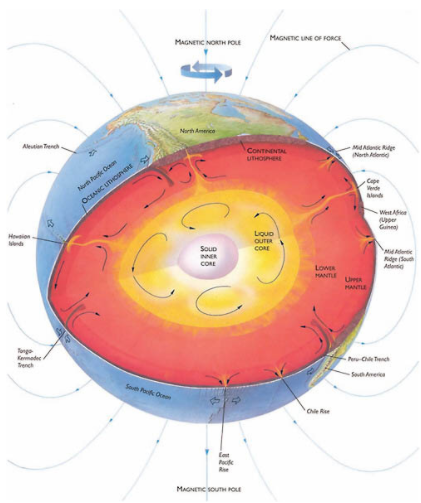 Figure 1. Simplified cross-section of the common interpretation for Earth’s interior. The thin layer at the Earth’s surface is the crust (brown), below that is the mantle (red), which extracts heat from the liquid outer core (yellow), which convects to produce the magnetic field and gradually solidifies to form the inner core (white). Image credit: universe-review.ca.

In general, the composition of a planet should be similar to that of its host star since they coalesced from the same stuff. Therefore, we should be able to measure the elemental abundance of a star and say something about its planets. However, concentrations of some elements can vary significantly from star to star due to the different processes that produce them. So-called r-process elements like U and Th are likely distributed unevenly throughout the galaxy because they only form under the extreme conditions of rare processes like neutron star merger events. For understanding radiogenic heat production in the mantle of a planet,  the presence of U and Th is important in terms of its concentration relative to the bulk mass of silicates. The ratio of europium to magnesium (Eu/Mg) serves as a good proxy for this since U and Th are hard to detect in the spectra of stars. Given typical measurements of Eu and Mg, the authors consider that radiogenic heat production in the mantle of similar planets may vary from roughly 30% to 300% of the Earth’s 15 terawatts.

The models at the center of today’s paper are relatively simple compared to more computationally expensive 2-D or 3-D models, but are sufficient to see how changing a parameter like mantle heat production could affect a planet’s evolution. They consider the timeline of three identical Earths, where the only difference is having less U and Th (Figure 2a), Earth-like concentrations (Figure 2b), or more U and Th (Figure 2c). All cases assume that plate tectonics contributes to heat transfer, because previous work suggests magnetic dynamos are more likely under conditions conducive to plate tectonics, despite its presence not being a certainty (see Venus, for example). In Figure 2, the authors use entropy production as a proxy for the likelihood and intensity of a dynamo. The entropy production rate determines the presence of a dynamo based on whether it exceeds the adiabatic entropy rate, where the adiabat defines the expected temperature and pressure conditions for the mantle. Dynamo convection is at first due to extraction of heat into the mantle that gradually declines, but rapidly increases again after the core cools enough to begin solidifying. This extra burst of activity is due to “compositional buoyancy” where solidification of the core releases light elements into the fluid above.

As a good starting point, the trend predicted by the model for normal Earth (Figure 2b) matches geologic observations that the Earth has had an active magnetic field for over 3.5 billion years, though it turned off or weakened at least once for a few million years. In fact, it seems that Earth was just on the threshold for having a consistently active dynamo, based on how the entropy production may have briefly dipped below the threshold around one billion years ago. In the case of less radiogenic heat than normal Earth (Figure 2a), solid core formation starts earlier and the dynamo is easily maintained. In the case of more radiogenic heat (Figure 2c), the dynamo may turn off for hundreds of millions of years because a high-temperature mantle isn’t as effective at extracting heat from the core. So, opposite to what you might expect, the authors find that more radiogenic heat in the mantle leads to less core heat flux, less dynamo, and a smaller solid core. 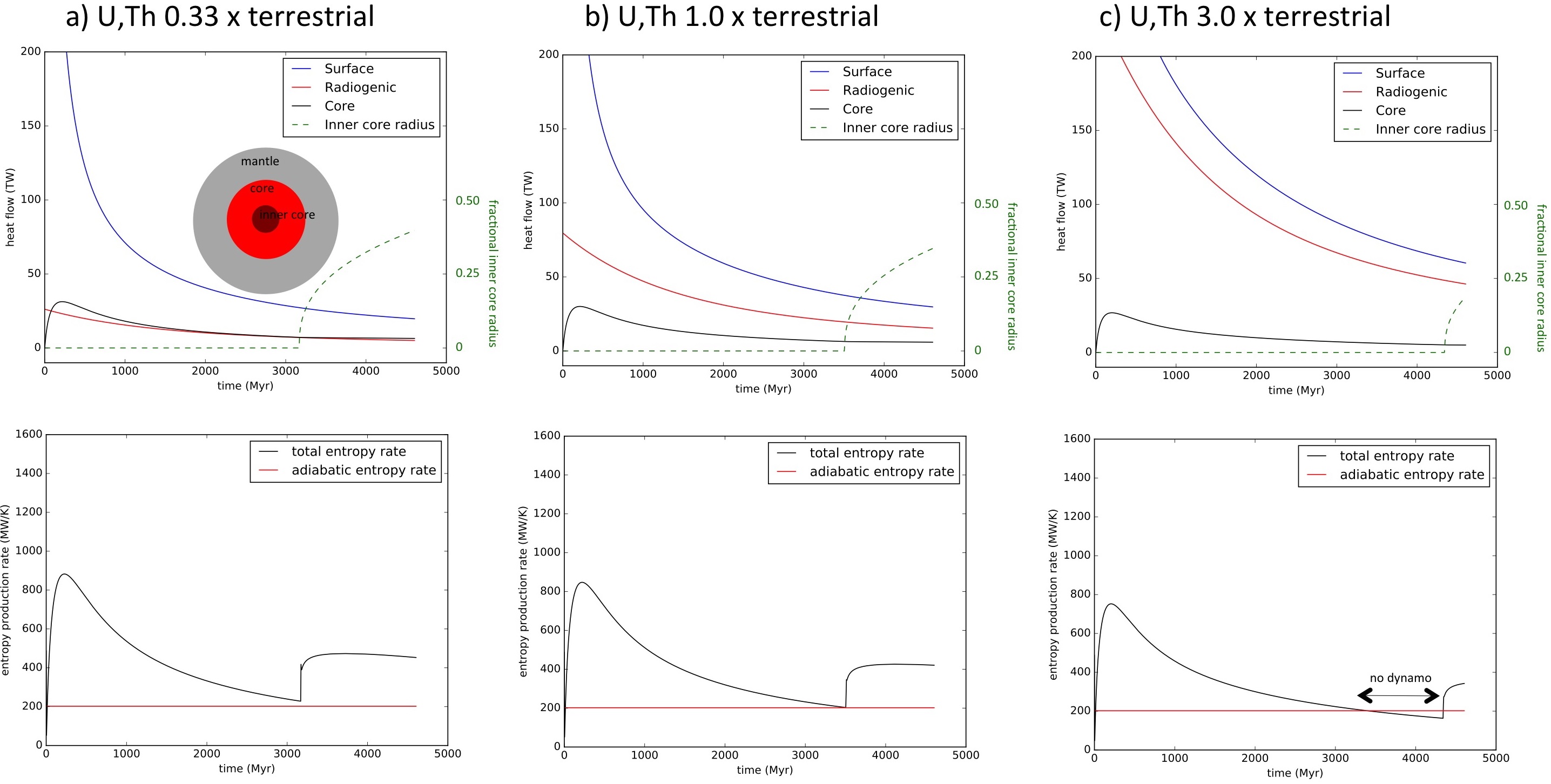 Figure 2. Model results for (a) 0.33, (b) 1, and (c) 3 times Earth’s U and Th concentrations. The upper panels show decreasing heat flow over time (solid lines) and the onset of inner core formation (dashed green line). The lower panels show the entropy production rate over time, which generally decreases until inner core formation begins. The dynamo is thought to operate only when the total entropy rate (black) is greater than the adiabatic entropy rate (red). Figure 1 from today’s paper.

A more thorough view of the effect of radiogenic heat can be seen in Figure 3. The concentration of radiogenic elements could affect the habitability of the planet based on whether they are of low enough abundance to allow for a magnetic dynamo. Though some disagree, it is generally thought that a magnetic field helps shield a planet from solar particles which may otherwise erode the atmosphere. On the other hand, higher radiogenic heat in the mantle is expected to cause more volcanism, which likely releases much of the volatiles that allow for a thick, comfy atmosphere. The authors point out that their model probably misses some of the complex feedbacks that may occur here, especially with the many unknowns about plate tectonics, but ultimately argue that the abundance of r-process elements (as seen from stellar Eu/Mg ratios) should be seen as another important factor to consider in the search for habitable exoplanets. 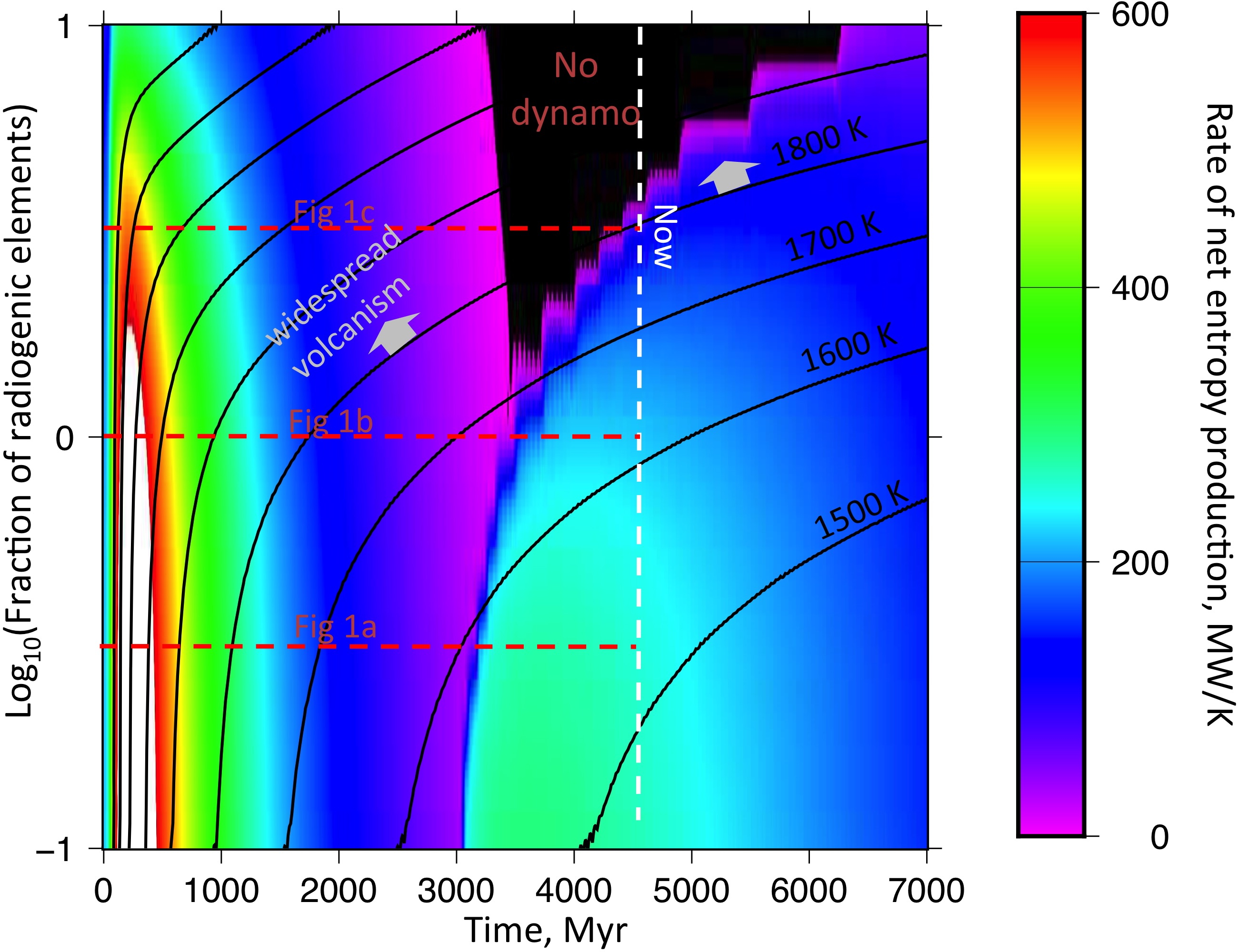 Figure 3. Rate of entropy production (indicated by color) for a varying fraction of radiogenic elements compared to normal Earth (in log scale) over time. Solid black lines indicate a reference temperature and the dashed red lines show the trajectory of three modeled scenarios through time (the author’s Figure 1 is referenced as Figure 2 in this astrobite). Note the black region where too much radiogenic heat kills the dynamo. Figure 2 in today’s paper.

Interestingly, it has been found that less radiogenic isotopes are present further from the galactic center. Also, older stars are found to have less of these heavy elements—however, these authors expect the random distribution due to r-process rarity to ultimately have the strongest influence on U and Th abundances. The more we learn about what makes Earth’s systems work, the more we will know about what to look for in our searches of the skies for habitable worlds. This paper paves the way for future observations and modeling to expand our view of the complicated interactions which feed into planetary geodynamics and possibly life in the universe.

Planets, stars, and their magnetic interaction