For the majority of galaxies in the universe, several billions of years must pass for dramatic, measurable changes to occur in their stellar populations and morphologies. Moreover, in the standard cosmological paradigm, ΛCDM, the most massive structures typically form last from the buildup of smaller constituents (this is known as hierarchical growth).  However, recent studies have found something surprising: some galaxies are able to accumulate incredible stellar mass (> 1011 Msun) and deplete their gas reservoirs, becoming “quiescent”, meaning they no longer forming stars, within the first two billion years after the Big Bang. These massive systems must form and evolve through novel avenues in order to assemble so much mass and exhaust their gas supplies so quickly. In this astrobite, we dive into the mystery of massive quiescent galaxies at high-redshift: where did they come from and how did they form? 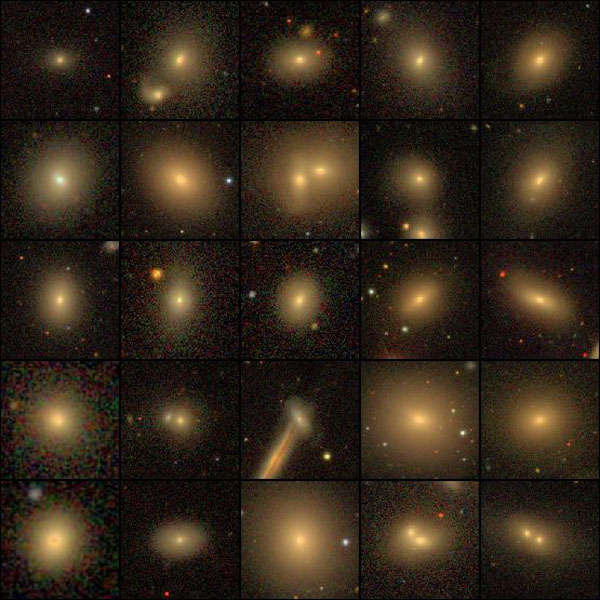 Figure 1: Images of nearby quiescent (elliptical) galaxies taken by the Sloan Digital Sky Survey (SDSS). While these galaxies have taken the age of the universe to attain their current state, some massive galaxies in the early universe, like the one we focus on in today’s astrobite, become quiescent in less than two billion years

One galaxy is worth one thousand words

While the diversity of galaxies throughout the universe is extreme (even during a single epoch), in-depth analyses of a few representative members are capable of shedding light on entire galactic populations. For rare sub-groups, such as massive quiescent galaxies (MQGs) at high-redshift, detailed studies of single objects can yield especially insightful results sparking further research. In this work, the authors sought to measure key properties of a previously discovered MQG with the catchy name of C1-23152 in order to explore more general questions about this population of galaxies, like those raised in the introduction. This galaxy is located at z = 3.35, when the universe was only 1.9 billion years old. Previous analyses of this galaxy used a combination of imaging, where one group of astronomers used the Hubble Space Telescope to measure structural properties, as well as shallow spectroscopy to confirm the redshift and some basic features. In this work, the team led by Paolo Saracco devoted 17.3 hours of total effective integration time with the Large Binocular Telescope (LBT) in Arizona to obtain a detailed near-infrared spectrum. The goal in obtaining this spectrum, shown in Fig. 2, was to conclusively establish this galaxy’s stellar age, metallicity, and velocity dispersion, while also constraining its star-formation history. 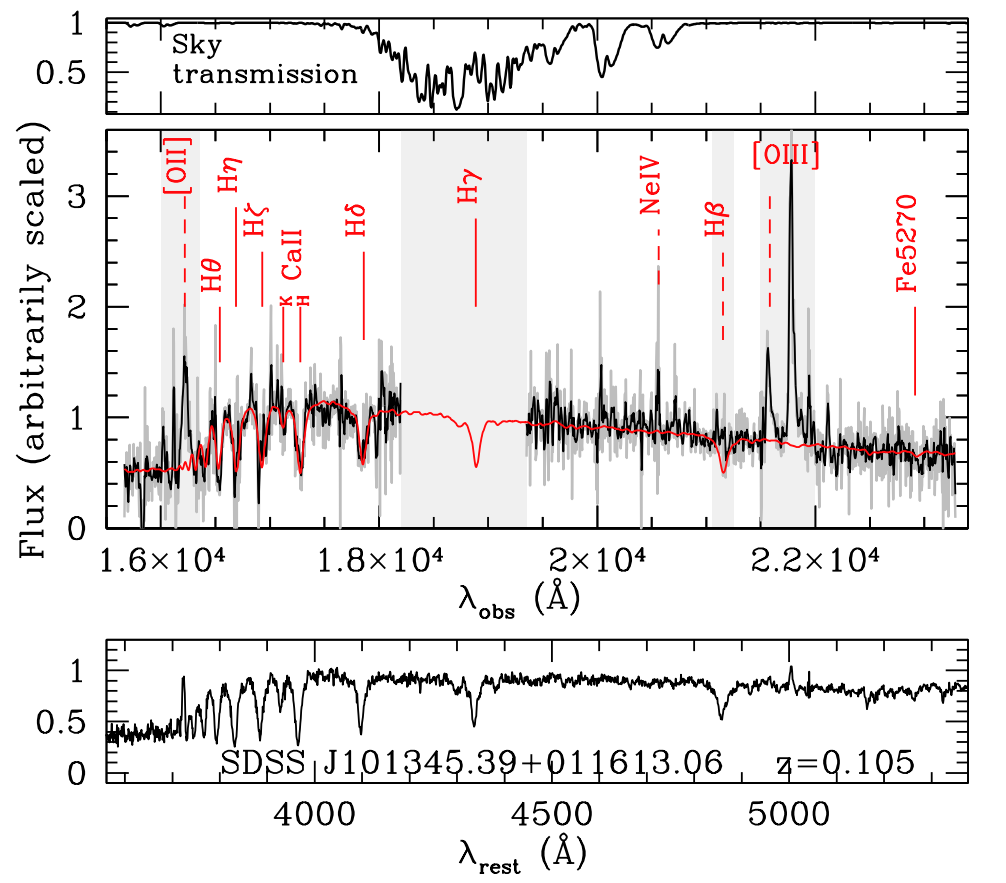 Figure 2: LBT spectrum of galaxy C1-23151 (Fig. 2 from this work). In dark grey is the observed spectrum; in black is a smoothed version of the spectrum; and in red is the best stellar population synthesis model used to infer the physical properties of the galaxy. Prominent emission and absorption lines are labeled in red, while grey vertical bars demarcate portions of the spectrum that are not used in the analysis due to the presence of strong emission lines or sky transmission. In the bottom panel, an SDSS spectrum of a local quiescent galaxy is shown for comparison.

Essentially all physical properties of galaxies are in one way or another encoded in the light they emit. The key then is to work backwards: using the light we observe through photometry and spectroscopy, what must the underlying physical properties be? Using the high quality LBT spectrum (Fig. 2) of galaxy C1-23152, the authors performed both absorption line fitting (ALF) and full spectrum fitting (FSF). In both cases, synthetic stellar population synthesis models with known physical parameters (e.g., stellar age, metallicity, mass) are compared with the observed spectrum. During ALF, as the name suggests, only the absorption lines are compared with those of models, as the strengths of these lines are easily measured and robust. Conversely, during FSF, the entire spectrum is compared with models. Combining the two approaches is a method to combat systematic issues arising from the model-fitting procedures and yields related but different estimates of the galaxy’s physical properties. Both of these methods employ a code which tries to fit multiple stellar populations of different ages to the observed spectrum (see Fig. 3 to see how this works). Lastly, the team performed standard spectral energy distribution (SED) modeling, where archival photometry from the UltraVISTA survey was used to constrain the SED of the galaxy. 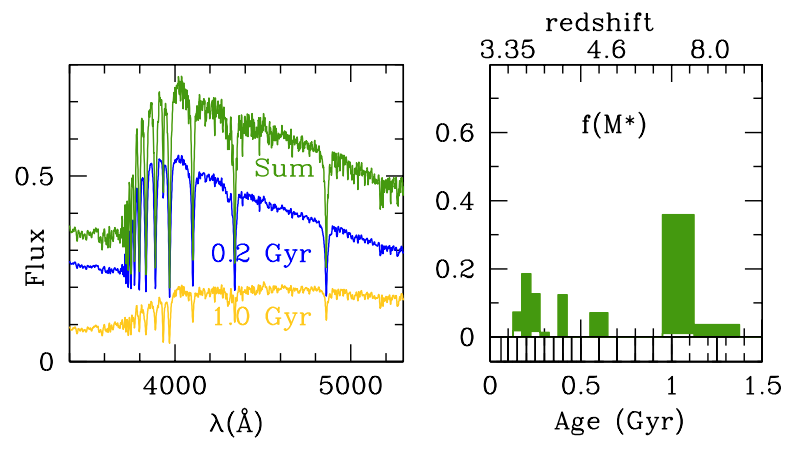 The Art of Inductive Reasoning

So how does this specific finding relate to massive quiescent galaxies in general? On the one hand, the fast formation time suggested by ALF and FSF, combined with the high surface mass density as measured through its morphology, points to a dissipative stellar-mass growth cycle that did not involve mergers, which would ultimately lower the surface mass density. The authors stress that density appears to be a principal driver in quenching star formation, which has been suggested by other astronomers. Theoretical models can form galaxies like C1-23152 relatively easily so long as the progenitor galaxy is dense. The greater-than-solar metallicity also suggests a fast, dissipative growth of stars. It is likely that the AGN in the galaxy played some role in the quenching process, although it is not clear from the data what that role is. Assuming this galaxy continues to evolve through well-understood pathways, such as major and/or minor mergers, it will likely resemble the most massive systems observed today (corresponding to z = 0). A comparison of how this galaxy compares with others like it is given in Fig. 4, where different evolutionary scenarios are also illustrated.

C1-23152 provides an interesting laboratory for understanding the growth of formation of massive quiescent galaxies in the early universe. With the detailed analysis of its spectrum, the authors confirmed many of the previously reported properties of this galaxy and were able to infer possible formation scenarios which fit into our theoretical understanding of the way galaxies form and change over time, although this galaxy is quite an extreme example. Nevertheless, each in-depth study of interesting and unique galaxies, like C1-23152, brings us closer to a full understanding of galaxy formation and evolution, with all of the intricacies included.