How Did Distant Quasars Grow?

Shortly after the Big Bang, the ionized plasma that made up the Universe cooled down, allowing the electrons and protons to (re)combine into neutral hydrogen. Eventually, after the formation of luminous sources, radiation started to ionize the neutral hydrogen again – a period of time known as the epoch of reionization. One of the sources thought to have helped re-ionize the Universe are a type of active galactic nuclei known as quasars. Quasars are some of the brightest objects in the Universe, allowing us to observe them even at redshifts z > 6.5, before re-ionization was complete. Although only about 50 have been discovered at such high redshifts, quasars are some of the most useful tools to study the epoch of re-ionization.

How these quasars came to be, however, is still unclear. After less than 1 billion years, the accreting supermassive black holes that power reionization-era quasars have not had enough time to grow to their measured billions of solar masses. To try to understand the physics behind supermassive black hole accretion (and therefore growth), the authors of today’s paper use X-ray and infrared observations to study the inner regions of quasars.

Today’s paper presents new Chandra observations for 5 quasars at z > 6.5, almost doubling the number of quasars that have X-ray observations at those redshifts (previously only 6 quasars!). Combined with the existing observations of 6 quasars and archival near-infrared (NIR) spectroscopy, the authors conduct a systematic analysis of the relationship between (restframe) UV/Optical and X-ray properties of distant quasars.

Does the way supermassive black holes accrete depend on redshift?

The X-ray spectra of quasars can be described by a power law with two important parameters: the slope of the continuum (α) and the photon index (Γ). Of particular interest is the optical to X-ray spectral slope αox, since it characterizes the optical emission from the accretion disk and X-rays coming from the hot corona. This slope tells us whether the accretion physics are dominated by emission from the disk or the corona and is also known to correlate with the UV luminosity at 2500 angstroms (L2500 ). To calculate αox , the authors use the ratio of X-ray (2 KeV/6.2 Angstroms) and UV/Optical (5 eV/2500 Angstroms) fluxes.

At these redshifts, the X-ray emission will still be observed as X-rays within the energy range of Chandra, but the UV emission will be observed in the NIR. The authors use archival spectroscopic data from observatories like Magellan, Gemini and the VLT to fit the NIR spectra and obtain the UV luminosity. Additionally, measuring the luminosity at 3000 angstroms allows them to estimate the black hole mass and accretion rate (λEdd).

Getting the X-ray luminosity is a bit complicated, since spectral fitting requires more photons than are actually observed (fewer than 20 photons per target!). Instead, the authors assume a single value for the photon index of Γ = 2  to estimate the X-ray flux of each quasar.

Figure 1 below shows the relationship between αox and L2500 for quasars with z > 2. To see if there is a difference between this relationship at different redshifts, the authors include quasars from the Sloan Digital Sky Survey (z ~ 2), and other work. The authors find the same correlation between αox and luminosity at high redshift as low redshift, implying that accretion physics does not evolve with redshift. 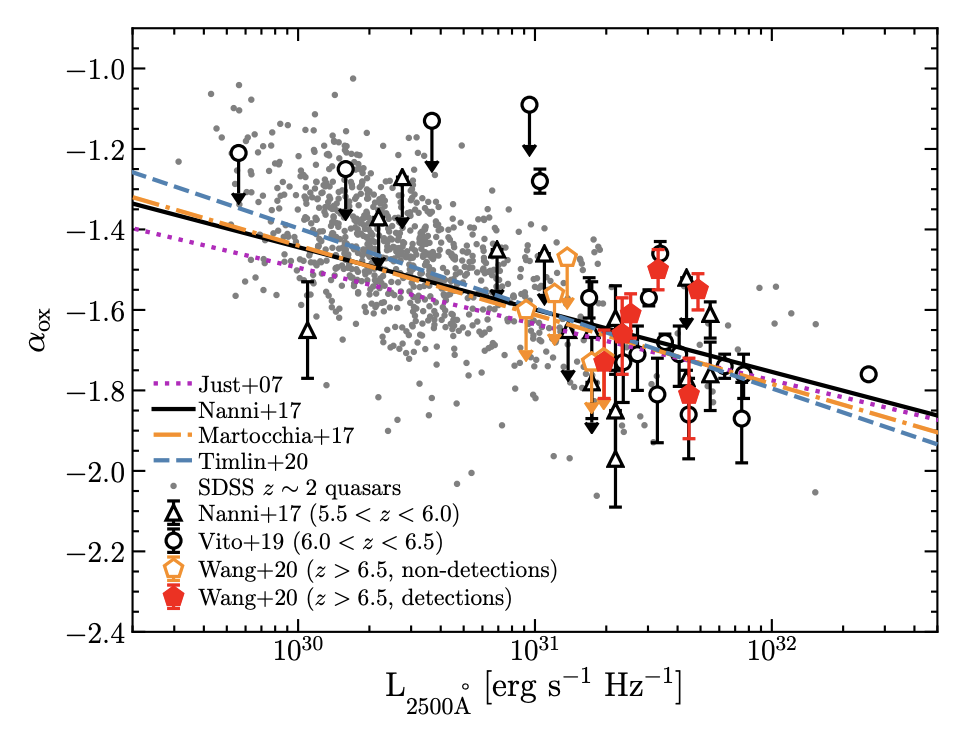 Figure 1. Relationship between αox and UV luminosity for quasars from z ~ 2 up to z ~ 7. Data points in red show the results from this work. Colored lines show different correlations found by previous work. Figure 4 in the paper.

To make up for the low photon counts and actually calculate the photon index, the authors combine the X-ray spectra of 6 quasars in two different ways. First, the authors simultaneously fit all 6 spectra and find Γ = 2.32.  The second method involves “stacking” the 6 spectra (accounting for redshift) to make a single spectrum with a combined photon count of 64, this results in  Γ = 2.11. Figure 2 below shows how the photon index Γ depends on redshift and accretion rate.

Figure 2. Left: Average Γ for quasars at different redshifts. The point shown in red is this work, and it’s consistent with the values found for quasars at similar redshifts (shown as open circles). Right: Relationship between average Γ and accretion rate as measured by the Eddington ratio (λEdd). Figure 10 in the paper.

The two values measured for Γ are consistent with previous measurements at similar redshifts, but higher than those for lower redshift quasars, meaning that at high redshift, the emission from the quasar tends towards lower energy X-rays. The right panel of Figure 2 shows a correlation between Γ and accretion rate that follows that of lower redshift quasars. It’s possible that the trend on the left panel of Figure 2 is a result of the higher accretion rates of the quasars observed.

Running up that hill: are some galaxy clusters moving away faster than others?