Terrestrial analogs: A slice of Mars in your own backyard

Aside from a few lunar missions you may have heard of, the study of planetary surfaces is mostly limited to remote investigations using telescopes and robots. Although there is some debate over the necessity of sending humans to other worlds, it’s certainly the case that many terrestrial geologists benefit from investigating their study sites in person. Thus, it’s no wonder that some planetary scientists embark into the field all across our planet to study features that may be considered comparable (or analogous) to those on other worlds—features known as terrestrial analogs.

When a planetary probe returns images of a geologic feature on Mars that is consistent with a known feature on Earth, we can study that analog here on Earth to better understand what geologic processes may have occurred on Mars. Of course, this type of science cannot be as simple as “that channel on Mars looks like rivers on Earth, so it must have formed by water!”. But, at minimum, analog sites are helpful in developing hypotheses for further investigating features on other planets. For example, if you’ve tentatively identified an ancient shoreline on Mars, studying coastal sediments on Earth could tell you what to look for to support your idea with a different dataset, working under the assumption that some aspects of beaches on Mars and Earth would be analogous. Geomorphologist Victor Baker would argue that analogies are in fact the root of all hypotheses in planetary geology.

Given the nearly airless and frigid conditions of Mars, it makes sense that some of its best terrestrial analog sites are found in Earth’s most extreme environments. Some of the driest places on Earth, like the Atacama Desert in Chile or the McMurdo Dry Valleys in Antarctica, are commonly visited to study geological and biological processes under similarly harsh and Mars-like conditions. Even more accessible places, like the deserts of the southwest United States, can provide the opportunity to study the morphology of rivers in the absence of vegetation, as they would have formed on Mars, for example. To explore whether the putative remnants of hot springs found by the Spirit Rover once held life, we can investigate the different biotic and abiotic processes found at hot springs on Earth that result in similar morphology and geochemistry (see Figure 1). Such a study might take you to geothermal hot spots in Wyoming, Japan, or even Iceland. 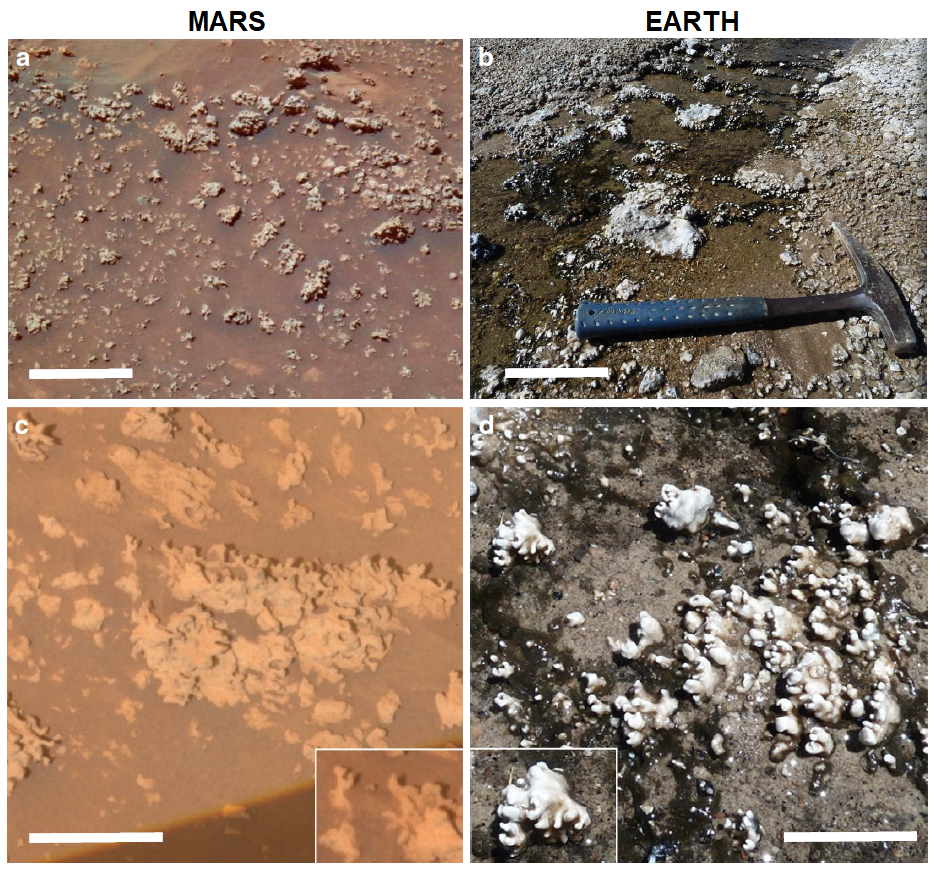 Figure 1 – Comparison of putative hot spring deposits on Mars (left side) and in the Atacama Desert (right side) which were studied in Ruff and Farmer (2016). Arguments in that paper suggest the similarities in chemistry and texture are consistent with, although do not confirm, a biologic origin from communities of microorganisms common in terrestrial hot springs. White scale bars are 10 cm in (a) and (b) and 5 cm in (c) and (d). Figure 3 from that paper.

Or maybe not so similar…

Of course, due to unique conditions on other worlds, many geologic features may have no good Earth analogs! For example, so-called “chaos terrain” found on several planetary bodies (such as Mars and Europa) generally involves a jumbled mess of blocky material that has no real comparison on Earth. Mars also forms bizarre “spider” features when CO2 ice under its surface sublimates and erupts. Another process that likely involves sublimation of volatile ices under non-Earthlike conditions occurs on Mercury to form depressions known as hollows.

Although planetary exploration continually provides us with some mysterious landscapes never before seen, the diverse terrain of our planet can still provide useful analogs for many other interesting geologic features. In particular, terrestrial analogs are relevant for geologic features on other planets that either formed under conditions similar to the wide range found here on Earth, or else are apparently unperturbed by the significant differences that may exist in composition, gravity, and other properties that vary across the solar system.

It is also true that terrestrial analogs don’t need to be perfectly equivalent to provide data useful for planetary science (perhaps one is an evil doppelgänger, but not exactly an identical twin). For example, the extensive dune fields around the equator of Saturn’s frigid moon Titan are likely made of organic sand—that is, they’re more like dunes made of coarse coffee grounds than dunes made of the quartz-dominated sand here on Earth. Despite this significant compositional difference, studying the behavior of similarly sized and shaped sand dunes in the Namib Desert of southwest Africa can be useful for making inferences about characteristics and processes we can’t yet observe for distant Titan (see Figure 2). This utility is especially true when combined with other experiments, such as laboratory measurements describing the physical properties of plausible organic sand compositions relative to the properties of quartz sand on Earth. Similarly, studying the blasted rock around the Sudbury Impact Structure in Ontario Canada, despite having been heavily eroded and buried under younger sediments and human development, can help us positively identify impact structures elsewhere in the solar system and infer what properties we should expect from the local geology. 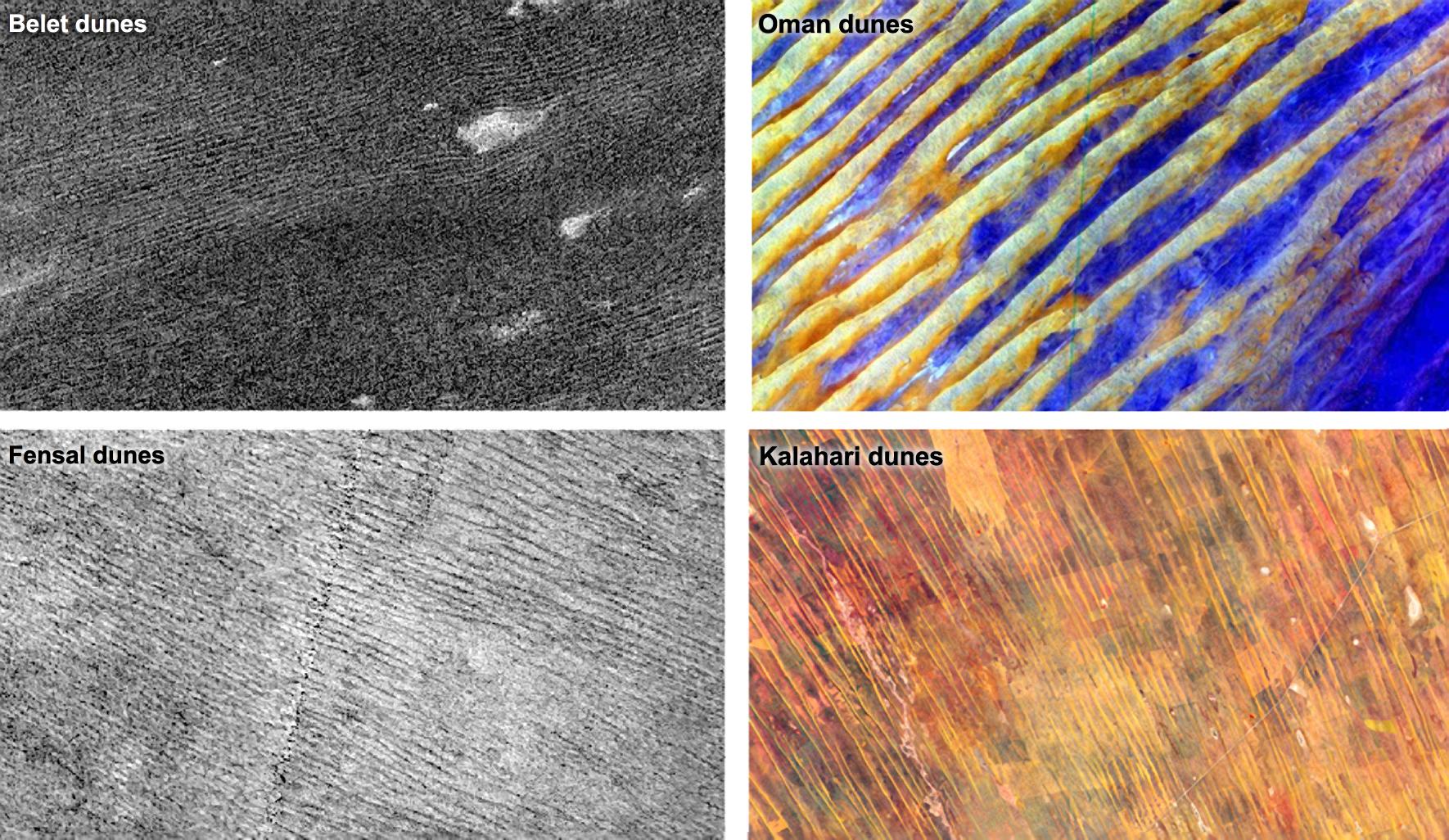 Figure 2 – Radar images of dune fields on Titan (left side) compared to images of linear dunes in Middle Eastern and African deserts (right side). PIA15225 from the NASA/JPL Photojournal.

Examples in my neck of the woods

In northern Arizona, where I currently live, we are fortunate to have a number of excellent field sites that can be considered analogs for planetary environments. For one, the city of Flagstaff sits on top of the San Francisco volcanic field. Essentially every bit of topography in the area is volcanic in origin. At its center is a stratovolcano system that includes the tallest peak in AZ. Nearby Sunset Crater National Monument includes cinder cone volcanoes young enough to have their eruptions vividly described in the stories passed down by local tribes (see summaries on pgs. 79–85). Another famous cinder cone was lovingly named with the initials S.P. (the meaning of which I’ll let you look up and judge for yourself), after its striking appearance. These volcanoes and their relatively young lava flows can be compared to evidence of similarly explosive volcanism preserved on parts of Mars (see Figure 3). Northern AZ is also home to one of the youngest and best-preserved impact craters on Earth, known as Meteor Crater. For anyone remotely interested in astronomy, it’s definitely worth a visit if you’re checking out the nearby Grand Canyon! And for super nerds, the Lunar and Planetary Institute hosts annual training courses in the field, alternating mostly between Meteor and Sudbury Craters, so that planetary scientists can learn to better connect data from planetary probes to real-world features on the ground. 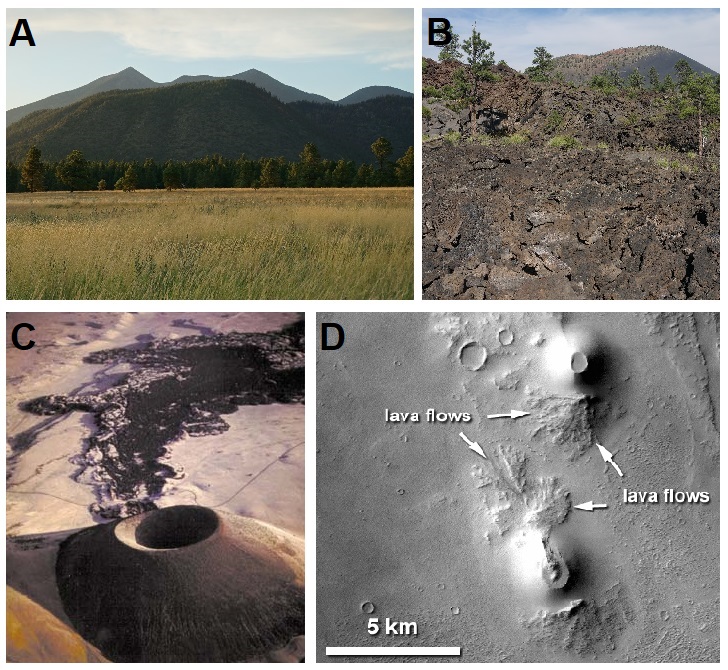 Figure 3 – Volcanism local to Flagstaff, AZ compared to some volcanoes on Mars. (A) The San Francisco Peaks are the remnants of a stratovolcano, the tallest of which is Humphreys Peak (Hopi: Aaloosaktukwi; Navajo: Dookʼoʼoosłííd). (B) The Bonito Lava Flow erupted from the base of Sunset Crater, which is the youngest cinder cone of the San Francisco volcanic field and can be seen in the background. (C) SP Crater is a similarly well-preserved cinder cone with a relatively young lava flow. (D) Putative cinder cones and their lava flows on Mars imaged by CTX. Upper images (A) and (B) taken by the author of this bite, lower images (C) from USGS and (D) from Figure 2 of Broz et al (2009).

In northern AZ, one may also think of the Grand Canyon when they look at Valles Marineris on Mars, but they may be surprised to find that this colossal martian canyon system is at least 5 times deeper than the Grand Canyon, and would span the width of the United States if superposed onto Earth! Of course, features on Mars are generally larger than their earthly counterparts owing to the lower gravity there, but the better analog to Valles Marineris may be massive rift valley systems on Earth, since it is likely tectonic in origin. In contrast, the Grand Canyon formed predominantly through fluvial incision of rivers during uplift of the Colorado Plateau. A simple geomorphological comparison can show how these very different shapes likely indicate different formation processes.

Still, northern AZ is such a hot spot of planetary science that NASA collaborated with the local United States Geological Survey’s Astrogeology Science Center to prepare Apollo astronauts for geologic structures they might encounter on the Moon. Training sessions occurred in the 1960s and 1970s at Meteor Crater, various local volcanoes, and even a homemade crater field (see Figure 4). Near these sites, one could even round out their southwest space history tour with a visit to nearby Lowell Observatory, the facility where Edwin Hubble discovered the expansion of the universe, Clyde Tombaugh discovered Pluto, and much fantastic astronomical research continues to this day. For the next generation of human exploration, with possible missions to the Moon or Mars in mind, researchers and young astronauts have gone to places like the Utah desert, Hawaiian volcanoes, and the Canary Islands to experience a taste of the desolation and to practice completing objectives on alien landscapes during EVA (extravehicular activity). 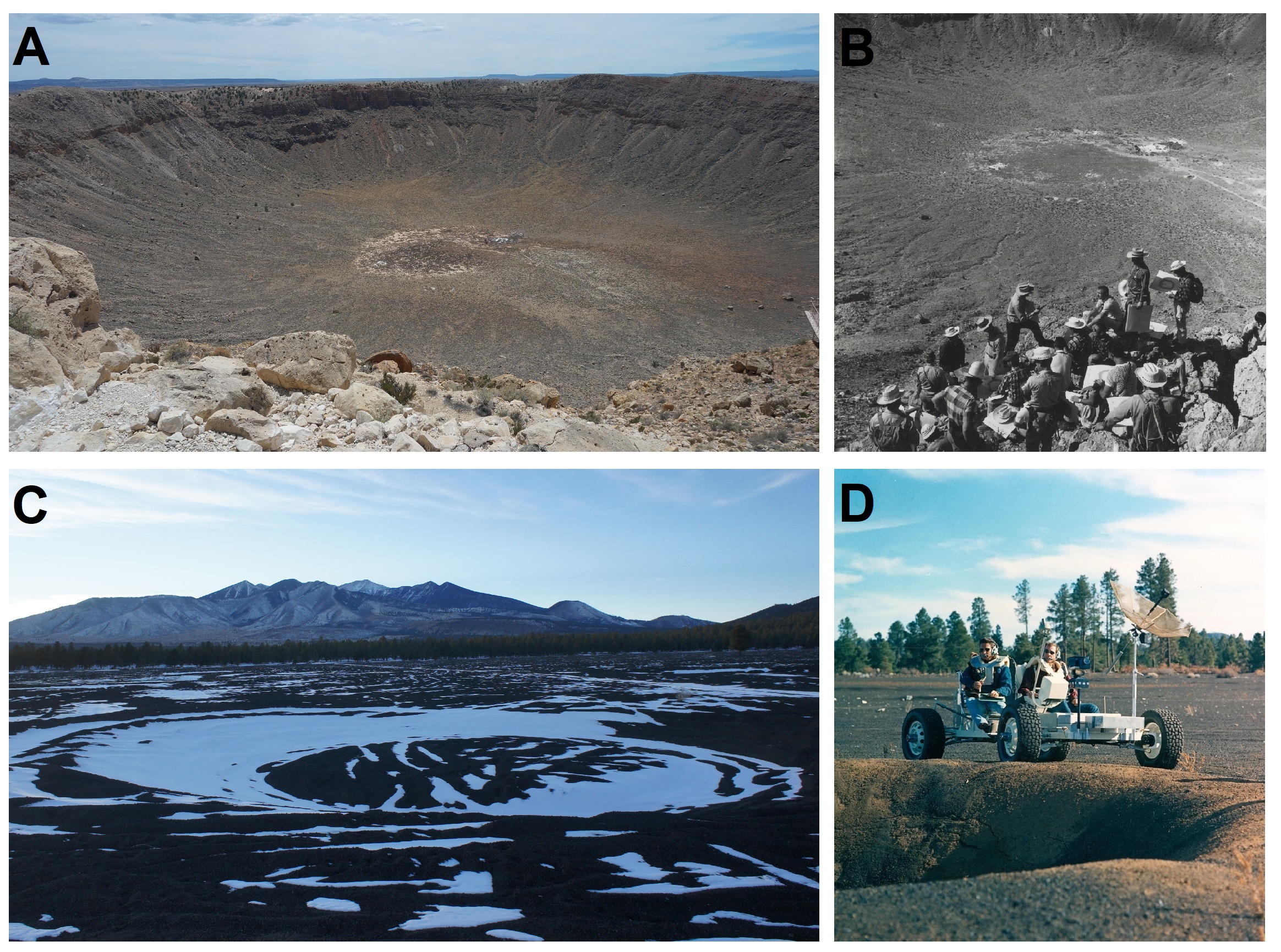 Figure 4 – Real and artificial craters where astronauts trained near Flagstaff, AZ. (A) 1.2-km-wide Meteor Crater and  (B) Dr. Eugene Shoemaker lecturing to Apollo astronauts gathered at its rim. (C) 20-m-wide shallow remains of a crater at Cinder Lake Crater Field manufactured by the Astrogeology Research Center with snowy San Francisco Peaks in the background and (D) Apollo astronauts James Irwin and David Scott testing a prototype lunar rover there back in the day. Images (A) and (C) taken by the author of this bite, images (B) from NAU and (D) from the Forest Service.

Much like the training of the astronauts, terrestrial analogs are also helpful in the preparation of robotic missions to other worlds. Scientists and engineers practice operating instruments and debate sample collection strategies for the Mars Perseverance Rover in the deserts of Nevada. Various rovers designed for the Moon and Mars are tested in the high-altitude Atacama Desert to see how they deal with sandy, rocky, and sloped terrains, sometimes with adjusted weights to account for gravity. For the Dragonfly mission to Titan, scientists and engineers will likely test camera systems and software by navigating for landing sites among sand dunes on Earth. Drills and seismometers are deployed on the ice shelves of Alaska, Greenland, and Antarctica, while autonomous submarines explore underneath to see how they might operate on icy ocean worlds like Europa.

Terrestrial analogs and studies in comparative planetology can improve our understanding of the solar system, and more broadly, our understanding of the general physical processes that may operate throughout the universe. As human and robot missions continue to explore, I think we will continually find that there are important lessons to be learned from the magnificent geology of our home world. Given the vast distances and great costs involved in space exploration, many years may pass before a new mission visits a particular planet (or region) of interest to a planetary scientist. In the meantime, the Earth can sometimes act as a small, but diverse laboratory with which to explore some of the varied terrain found in the cosmos.

BEYOND: Space Missions To Look Forward To In the 2020s