The first few hundreds of millions of years (Myrs) of the universe include some of the most dramatic changes it has undergone, transforming from a near uniform distribution of gas into a diverse landscape of the first stars and galaxies. The early universe, characterized by an enormous abundance of pristine gas and by a dearth of massive structures looks quite unlike the universe today. If you were an observer peering into the young cosmos, you would be able to see very little around yourself, as the abundant neutral gas blocked most light from passing through and reaching you. However, the young stars in these early galaxies sent out high-energy photons throughout the expanse of gas, which ionized abundant hydrogen, eventually making the intergalactic medium transparent. The formation of the first galaxies, as well as their important role in reionizing the universe, is poorly understood because these galaxies appear faint owing to their distance, and are only visible in infrared wavelengths and beyond, altogether making them difficult to observe, especially from the ground.

The most distant galaxy known to date is called GN-z11. First discovered over four years ago within the GOODS-North field, this most distant galaxy is located all the way at a redshift of nearly z = 11, hence the name (note that a redshift of z = 11 corresponds to a distance of over 32 billion light years). The light we observe from this galaxy corresponds to a time roughly 400 Myrs after the Big Bang, right at the onset of the reionization period. The discovery of such a galaxy provides an extraordinary opportunity to unravel the processes of galaxy evolution during one of the most poorly understood epochs of the universe. In today’s astrobite, we explore a recent work which firmly establishes GN-z11 as the most distant galaxy currently known and uniquely investigates some of its physical characteristics. 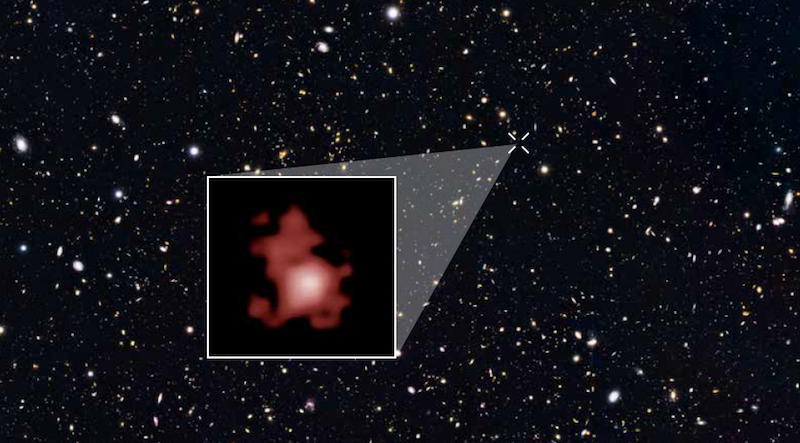 Figure 1: Galaxy GN-z11, the most distant galaxy ever observed, is shown within the GOODS-North survey field where it was originally discovered with the Hubble Space Telescope. This galaxy is shown in red, reflecting that its light is detected in the infrared due to cosmological redshift. Credit: NASA/ESA; P. Oesch et al. (2016).

How to confirm a distant galaxy

When carrying out surveys in which several thousands of galaxies are observed, a standard practice is to first extract photometry for each source in every available filter, and then remarkably, use this photometry to estimate each source’s respective redshift. Once the redshift is known, observed quantities (like apparent magnitude) can be converted into physical quantities (like luminosity). These “photometric redshifts” are quick to obtain but not nearly as reliable as spectroscopic redshifts, which can only be measured from a high-quality spectrum of a given galaxy; spectroscopic observations always require far more observing time than imaging per galaxy, since the observed light is dispersed across the detector.

In this work, a team of astronomers led by Linhua Jiang of Peking University utilized the unique capabilities of the Keck-1 telescope on Manuakea, Hawaii (the largest infrared-capable telescope) to obtain the first detailed spectroscopic observations of GN-z11. Previously observed with both the Hubble Space Telescope and the Spitzer Space Telescope, a different team derived a photometric redshift and a “grism” redshift for the same source of z ~ 11. With the new observations from Jiang’s team, which required over 9 hours of total exposure time , the redshift of this galaxy can be firmly established at z = 10.957 through the detection of three emission lines, one of which is significant above the 5-sigma level (generically corresponding to a false positive chance of 1 in 3.5 million). Figure 2 shows two of the emission lines detected in both the one and two-dimensional spectra of GN-z11. 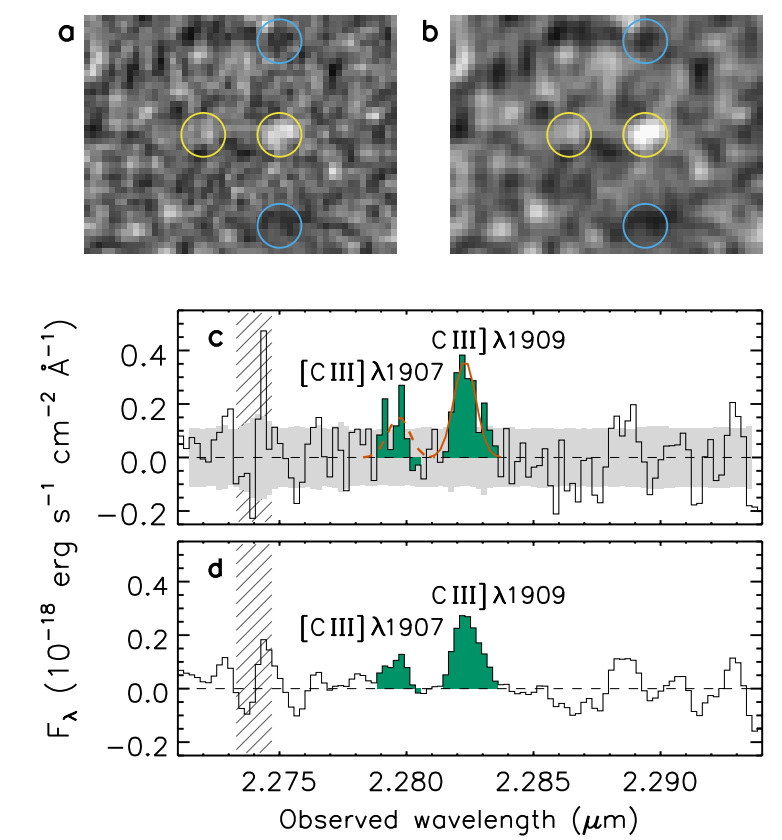 Figure 2: Panels (a) and (b) depict the ordinary and smoothed versions of the two-dimensional spectrum of GN-z11, where the vertical dimension corresponds to the position of the slit on the mask while the horizontal dimension corresponds to wavelength. Panels (c) and (d) depict the corresponding one-dimensional spectra. The emission lines are circled in yellow in the upper panels, and the names of the identified spectral features are given in the bottom panels. The grey filled region in the upper panels depicts the 1-sigma uncertainty; these lines are detected at 2.6 and 5.3-sigma respectively. Figure 2 in the original work.

Inferred properties of the most distant galaxy known

As stated above, with the redshift established, apparent properties can be converted into physical quantities. In brief, the common method for estimating the physical properties of galaxies is done through comparing its observed spectral energy distribution (SED; constrained by either photometry or spectroscopy, or both) with synthetic spectral energy distributions (i.e. models) of galaxies in which all of the properties are known. In this case, the authors compare simple synthetic SED with the existing Hubble and Spitzer photometry to measure three properties of the GN-z11: its dust reddening, age, and its stellar mass. The best-fit model is shown below in Figure 3. 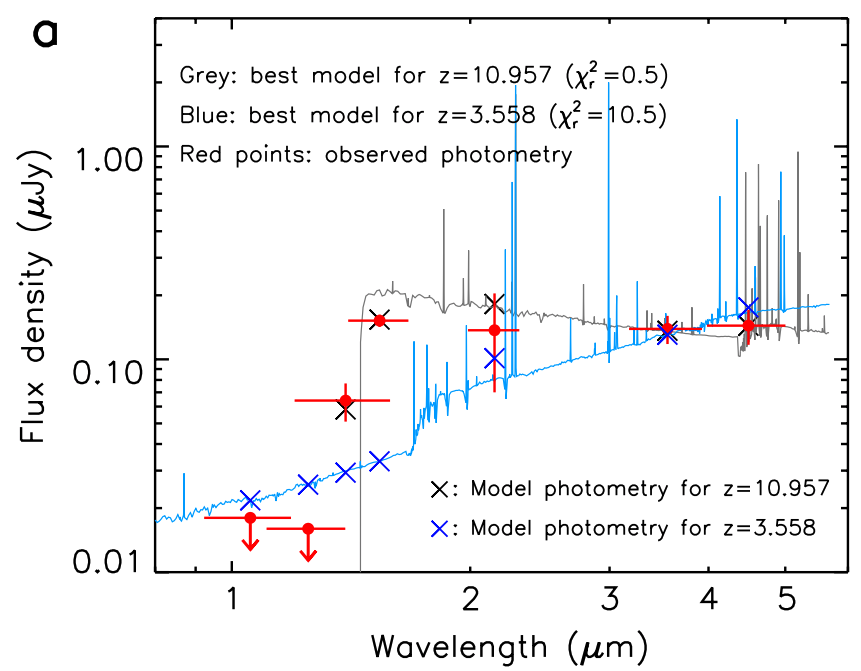 Figure 3: Demonstration of modeling the SED of GN-z11. Red data points spanning the NIR to mid-IR correspond to the observed HST, ground-based, and Spitzer photometry taken from the literature. The grey SED, corresponding to a galaxy located at z = 10.957, provides a significantly better fit to the data compared to the blue SED, which corresponds to a galaxy at z = 3.558, a plausible solution if the observed emission lines were identified incorrectly. The physical properties of GN-z11 are thus derived from the grey SED. Panel (a) from Extended Data Figure 4 in the original work.

Unsurprisingly, the derived dust reddening is consistent with zero, meaning there is little dust present in this galaxy – this is expected, since dust content is built up from generations of stars completing their evolution cycles, which GN-z11 should not yet have experienced. The age, although uncertain due to the sparse sampling of the SED, is also reported to be very young, clocking in at less than 100 Myr. Lastly, the stellar mass is found to be a little more than a billion solar masses, roughly one sixtieth of the mass of the Milky Way. However, the Milky Way as we know it has had the entire history of the universe to build this much mass in stars, over 13 billion years, whereas GN-z11 has achieved its mass in only a few hundreds of Myr. This implies that the build-up of stars in GN-z11 must have been extraordinarily rapid.

Further information is revealed from the new spectrum of GN-z11. The particular spectral line detected at greater than 5-sigma (CIII]) is sensitive to the electron density of the material from which it was emitted. The width of this line, shown in Figure 2 above, suggests a very dense interstellar medium within GN-z11, and may indicate that GN-z11 hosts an active galactic nucleus.

The future of high-z galaxy studies

With new observatories on the horizon specializing in infrared observations, such as the Euclid mission, the Nancy Grace Roman Space Telescope, the James Webb Space Telescope, we are on the cusp of exploring the realm of reioniziation and the first billion years of the universe in ever greater detail. While the current record holder for the most distant galaxy is GN-z11, we should expect to find many more galaxies at similar distances with these new facilities through their combination of field of view (especially Euclid’s and Roman’s), and resolving power (one of JWST’s primary features). For the time being, GN-z11 has revealed a tremendous amount of information about the early universe, and the confirmation of its distance is an encouraging testament to the methods astronomers have developed for finding such rare objects in the vast cosmos.