Gravitational microlensing happens when a massive object, or “lens,” passes in front of a “source” (any visibly bright object), projecting the source’s light as warped images around the lens. These individual images are too small to resolve, so observers instead see the source becoming brighter and then dimming again (Figure 1). A planet orbiting a star creates a complex lens system with a unique signal, and over 100 planets have been discovered this way. But the method can find more than just planets! Any massive object can be a lens, so we can find things like black holes and neutron stars that would otherwise be too dim to directly observe. The authors of this paper present the microlensing discovery of a binary pair of dim objects. 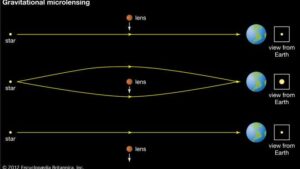 Figure 1: As a lens passes in front of a star, it bends the starlight passing around it. From Earth, we see the star get brighter then dimmer again. Source: Encyclopedia Britannica, Inc.

Let’s take a look at some of Scott Gaudi’s microlensing animations to visualize these events. The most basic, single lens microlensing event is shown in Figure 2 in the frame of the lens; a source passes behind a stationary lens, being distorted along the way. In the bottom of the animation, we see the resulting light curve, which describes how the source brightness changes over time. These events get more complicated for a binary lens (Figure 3), where the lens is a system of two objects, as the effective lens shape turns into caustic curves (shown in red in the figure). We won’t worry about the specifics of the caustic math here, but the unique shape of the resulting light curve is key in determining that a lens system is binary. If you are interested in getting into more of the details, this (open access) textbook chapter is a great place to start.

Figure 2: Animation of a single lens microlensing event’s progression over time. The top panel shows the movement of the source and its images with respect to the lens, and the bottom shows the resulting light curve. Source: Scott Gaudi

Figure 3: Animation of a binary lens microlensing event’s progression over time. The top panel shows the movement of the source and its images with respect to the lens system, and the bottom shows the resulting light curve. Source: Scott Gaudi

Figure 4: Animation of an astrometric microlensing event’s progression over time. The top panel shows the lens’ passage in front of the source and the resultant images. The bottom panel shows the image centroid’s motion. Source: Scott Gaudi

In August 2016, the previously static star Gaia16aye was flagged in an alert for a significant change in brightness. This initiated follow-up observations with a massive network of telescopes. The observations continued for about 500 days, as the source travelled across the lens system, with the complete light curve shown in Figure 5. Monitoring continued for another year to make sure that this long-timescale event was over. 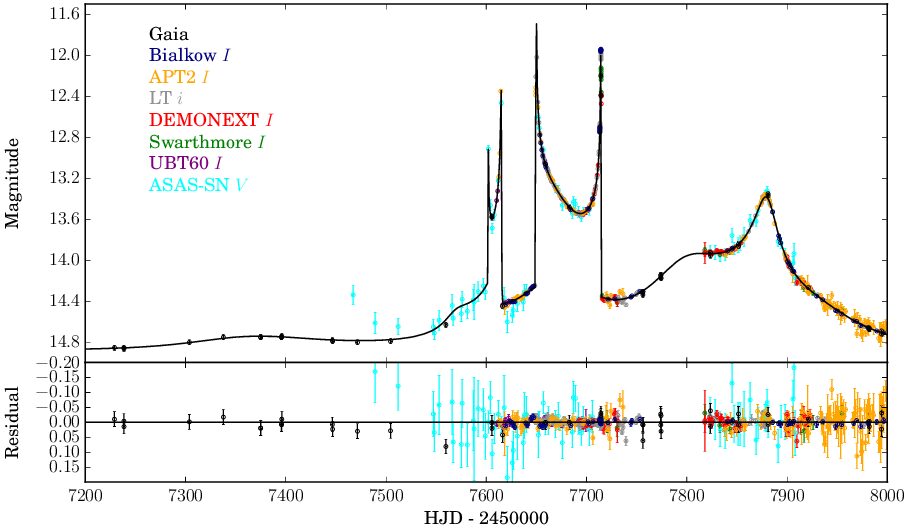 The group tried to recreate the light curve with a simple binary lens model, like that shown in Figure 3 above, but they found that this model was insufficient to explain the light curve. Because of the very long period of this event, they needed to account for some additional effects: Earth’s orbital motion and the binary lens system’s orbital motion. They also incorporated into their calculations microlensing space-parallax, which takes into account the variation of the light curve shape between Earth-based observations and Gaia’s observations from the L2 Lagrange point due to the difference in perspective on the event (about a 0.01 AU separation).  To characterize the lens system, the team incorporated a full Keplerian orbital model, modelling the 3-D orbital motion of the lens system.

The best fit model revealed the system to be two objects with masses ~0.57 and ~0.36 times that of the sun, orbiting each other with a 2.88 year period at a distance of ~780 parsecs from the Sun. One of the follow-up observations included the Keck observatory, which was able to measure the blended flux (light from the lens system as a whole) and separate it from the source flux. This flux matches up with what one would expect if these two objects are main sequence stars.

The pair, now named Gaia16aye-L(a & b), is one of few binary microlens systems for which the full orbital parameters have been solved. This work is a great example of how much we can learn about systems that we cannot see. While this event was caused by two main sequence star lenses, it’s a demonstration of the kind of process that can be used to learn about dark objects like black holes and neutron stars. In the age of gravitational wave detection, instruments like LIGO can detect massive but very distant (outside of our galaxy), merging black hole binaries. This microlensing method can detect smaller binary objects in our own galaxy.