Intermediate-mass black holes (IMBHs) are a mysterious and elusive class of black holes that have masses between 100 and 10,000 times that of the Sun.  Despite a wealth of theoretical evidence that supports their existence, IMBHs have been extremely difficult to detect, both directly and indirectly.  The first and only direct observational evidence for their existence came just over two months ago with the groundbreaking LIGO detection GW190521 produced by the merger of two low-mass black holes.  Aside from this gravitational wave detection, no other direct observational evidence for the existence of IMBHs has been found.  Today’s authors hope to change that by devising a new, innovative way to look for IMBHs by looking for the high-speed stars they fling out.

First-off: Why do we care so much about Intermediate-Mass Black Holes?

IMBHs have tantalized astronomers for decades because their existence could explain several important questions facing the field.  Firstly, IMBHs may explain the perplexing existence of supermassive black holes (SMBHs) just a few hundreds of millions of years after the Big Bang.  IMBHs could be the “seeds” of SMBHs, giving them a jump start to grow to their massive size, which can range from millions to billions of solar masses.  Without an IMBH seed, the growth of a SMBH on such short timescales would require extreme, unphysical rates of fuelling onto a low-mass black hole.  IMBHs could also explain the Milky Way’s “Paradox of Youth”, which describes the perplexing distribution of very young stars near the center of the Milky Way, a region otherwise dominated by old stars.  Theory suggests that an IMBH could have migrated to the center of the Milky Way, bringing with it a population of young stars, before coupling with the SMBH at the center of our Galaxy.  Thirdly, IMBHs could be the reason why most globular clusters resist core-collapse, a process that naturally happens in old, relaxed systems where the center of the cluster forms a tight, high-density central population.  A central IMBH could be the support keeping globular clusters from experiencing such a collapse.

There is a collection of indirect observational evidence that supports the existence of IMBHs.  For example, studies looking at the velocity dispersions of stars and gas in clusters and low-mass galaxies have found additional, unseen mass that could be attributed to an IMBH.  However, this indirect observational evidence is hard to interpret and hardly enough to extract precise and accurate parameters of the central object.  Direct observational evidence is crucial for actually studying IMBH characteristics, and previous studies have looked for indisputable signs of an IMBH through 1. gravitational waves and 2. the orbits of stars immediately surrounding a potential IMBH.  However, the first method is inefficient because gravitational waves are quite rare.  The second method is also not ideal.  Globular clusters are extremely dense, so their stellar populations, particularly in their center-most regions, are extremely difficult to resolve.  Thus, orbital studies of globular clusters are difficult and expensive (think space-based telescope time).

So instead of waiting around for gravitational waves or dealing with the headache that comes with studying the dense neighborhoods of globular clusters, the authors of today’s paper turn to the stars that are ejected by central IMBHs via the Hills Mechanism.  The Hills Mechanism occurs when a binary star system approaches a black hole or other compact object: one member of the binary pair is trapped by the black hole while the other is flung out with extremely high speeds.  This group modelled the velocity distributions and orbital characteristics of stars ejected by central IMBHs in globular clusters to show how we might go about finding hyper-velocity stars (HVSs) flung out by an IMBH.

The Hills Mechanism is also at work in our Galactic center, where our central SMBH flings stars radially outward with extreme speeds reaching up to 1,000+ km/s.  This team argues that looking for HVSs that are not moving radially outward from the center of the galaxy, but instead beelining from some position in the halo where globular clusters live, could be the first hint a star was ejected by an IMBH.  The authors perform 80,000 experiments to model what the velocities and positions of these ejected stars would look like for different IMBH masses and stellar binary separations.  They compare these velocity and position distributions with those produced by simulations of stars ejected from the Galactic center and the Milky Way disk by supernovae.  The authors find that, across the range of IMBH masses and binary pair separations, ejected star velocities can range from ~150-700 km/s (Figure 1), and they can be observed to reside anywhere from ~5-100 kpc out from the Galactic center (Figure 2). 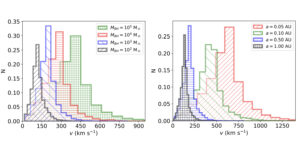 Figure 1: Velocity distributions of simulated stars ejected by an IMBH in a globular cluster. The x-axis corresponds to the velocity of the ejected star, while the y-axis corresponds to the fraction of stars possessing that velocity.  The velocity distributions vary with both IMBH mass (left, in solar masses) and binary pair separation (right, where 1AU = the distance between the Earth and the Sun).  Figures 2 and 3 in the paper. 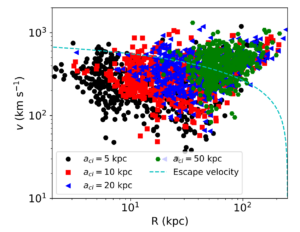 Figure 2: How varying the position of an IMBH affects the positions (X-axis) and velocities (Y-axis) of stars ejected by said IMBH.   Colors correspond to the radial position (acl) of the simulated IMBH-hosting globular cluster relative to the center of the Galaxy.  Figure 6 in the paper.

Additionally, they look at the rates of ejection for each of these methods and find that HVSs ejected by IMBHs in globular clusters should occur about a tenth as often as those ejected from the Galactic center.  This might mean that a significant fraction of HVSs found in Gaia are ejected by IMBHs!

The positional and velocity distributions calculated by the authors provide an excellent foundation to search for globular clusters hosting IMBHs.  One can search for HVSs with these characteristics and then trace them back to their parent cluster.  These parent clusters can then be examined with powerful telescopes like JWST to confirm the presence of an IMBH by tracing the orbits of the parent cluster’s center-most stars.  By compiling a list of IMBH-hosting globular clusters, we can finally begin studying IMBH occurrence and formation rates in various environments.  Expanding our list of IMBH detections could provide crucial information to enhance our understanding of SMBH formation at early times, globular cluster structure and formation, and the “Paradox of Youth.”

Elusive black holes: Have we found the ‘middle sibling’?