In 1988, J. G. Hills predicted that binary stars near the center of our galaxy would occasionally interact with Sgr A*, the galaxy’s supermassive black hole, causing one star to be ejected from the system with enough energy to completely escape the galaxy’s gravitational pull. In the 2000’s several so-called “hypervelocity stars” (HVSs) were detected, and indeed these objects were giant stars with orbits consistent with ejections from the galactic center. More recently, other theories have been proposed to create HVSs, including anisotropies in the galactic potential and energetic “kicks” induced by nearby supernovae. The authors of this paper present a new collection of potential hypervelocity stars that appear not to originate in the galactic center, and discuss their potential origins with respect to these theories.

At the end of the Sloan Digital Sky Survey (SDSS) mission, the SDSS telescope was used to create the Sloan Extension for Galactic Understanding and Exploration (SEGUE) survey (discussed in this Astrobite), which obtained spectroscopic information on nearly 250,000 stars in the galaxy. The authors analyzed 70,000 G (solar type) and K (slightly sub-solar) dwarfs in this survey, measuring their Doppler shift and proper motion. The Doppler shift corresponds exactly to the radial velocity of a star, independent of the distance to the star. Proper motion, however, is related to both the tangential velocity and the distance to a star. If a star has a large angular proper motion, it could either be moving rapidly, or simply be nearby. The product of the star’s proper motion and its distance is directly proportional to its tangential velocity. To estimate the distance to each star, the authors estimate its spectral type (and thus true luminosity) from the observed spectrum, and compare that to the observed flux. This method requires an estimate of the amount of absorption by dust in the interstellar medium along the light’s path from the star to our telescope; if this value is incorrectly estimated the distance to the star can be significantly mismeasured. 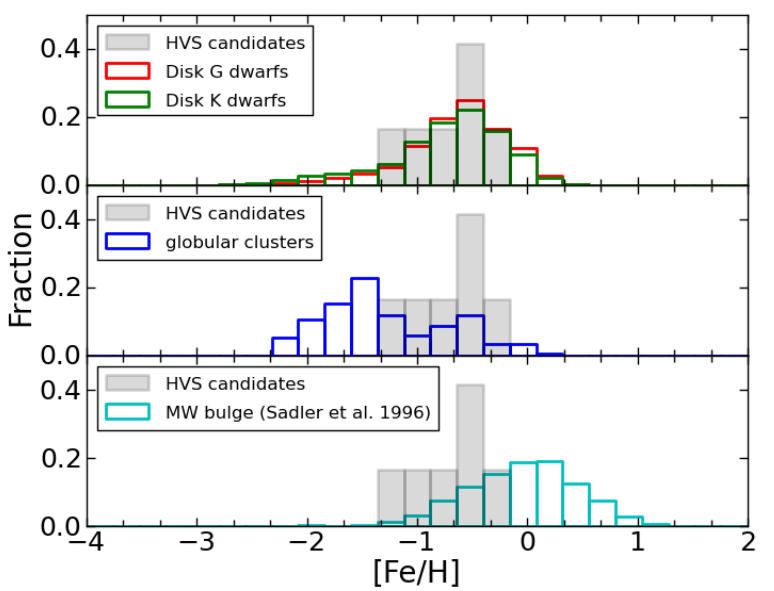 Metallicity distribution for the HVS candidates (gray) compared to the metallicities of disk stars (top), globular clusters (middle), and bulge stars (bottom). This sample appears to be most consistent with stars in the galactic disk.

The authors measure each star’s tangential and radial velocity and select for their sample those stars having a total velocity vector larger than 600 kilometers/second, fast enough to escape the galaxy. This sample contains 13 targets. It is worth noting that in many of these cases, the (more robustly measured) radial velocities are quite small, while the tangential velocities are very large. If these stars have had their distances significantly overestimated, then their tangential velocities are correspondingly smaller and the stars may not actually be HVSs. Moreover, the proper motions are small (around 0.05 arcseconds per year for these stars), and the measurement uncertainties are large (around 0.01 arcseconds per year), so out of a sample of 70,000 stars, a few systems would be expected to have significantly overestimated proper motions simply by chance alone.  For each star the authors provide a probability that the star is an “interloper” with a much smaller true proper motion; these values range from 0.004 to 0.6 (0.4 to 60 %). The authors note that this sample is simply a list of candidates, and more follow-up is needed to separate the true HVSs from false positive interlopers. 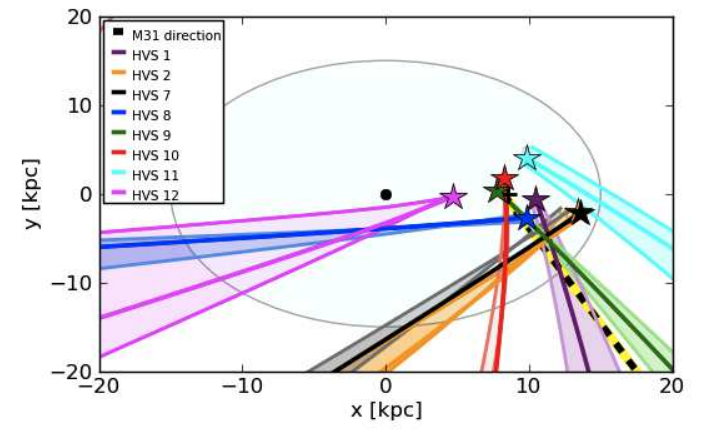 Orbits of the 13 HVS candidates integrated backward in time for 1 billion years. The black dot corresponds to the location of the supermassive black hole; none of the stars appear to originate from this area of the galaxy. Moreover, most of these orbits are tilted out of the plane of the galaxy (not shown here).

Now that we have a sample of potential hypervelocity stars, where do they come from? The authors first look at the metallicity distribution of the stars and compare it to samples of other stars in the galaxy (above right). They find the HVS G and K dwarf candidates are similar to the distribution of G and K stars in the galactic disk. They find Milky Way bulge stars are much more metal rich than this sample, while stars in globular clusters are much more metal poor. This suggests that these stars originate in the disk, not the bulge near the galactic center or the galactic halo. The authors then use the positions and velocities of each star and integrate their orbits backward in time to determine their origins (at left). They find the stars do not all originate from the same section of the galaxy and none come from the galactic center. Therefore, while the origins of the stars are unclear, their metallicity distribution and velocities are consistent with these objects not originating from near the central black hole.

More followup work will be needed to study the origin of these stars and determine which are true HVSs (by improving our estimate of the distances to the stars and their proper motions) to better understand their origins and history, but for now it seems like the galactic center hypothesis is incomplete.