Where do hypervelocity stars come from?

Hypervelocity Stars
In 2005, Brown et al. discovered a star with a radial velocity of ~700 km/s, which is more than 3 times the Solar velocity! This star is moving so quickly that its velocity is high enough to escape the Milky Way. The existence of such stars, deemed hypervelocity stars (HVSs), was predicted almost 20 years earlier by Hills (1988).

The so-called Hills mechanism ejects stars at high speeds from the center of the Galaxy after a binary stellar system gravitationally interacts with the supermassive black hole at the center of the Galaxy. In such a three-body interaction, one star can be ejected at very high speeds while the other remains in the central region of the Galaxy on a highly eccentric orbit. A number of highly eccentric short-period stars are observed in the Galactic center, which suggests associated HVSs may exist. Since the initial discovery of an HVS in 2005, many more have been discovered (see this astrobite). A small warning: the exact definition of HVSs can vary throughout the literature. In this post, stars traveling away from the Galactic center with velocities high enough to have become unbound from the central black hole are referred to as HVSs.

While it is very likely that the Hills Mechanism does create HVSs, it is unclear whether all HVSs are created via this method. Curious if there is a supplemental method to produce HVSs, the authors of today’s paper examine the production of HVSs via supernovae explosions.

How many HVSs are produced by supernovae?
Zubovas et al. examine the production rate and spatial distribution of HVSs from the ejection of a binary companion during a supernovae explosion. Most stars, especially most large stars, are part of a binary system. If one of the stars is massive enough to undergo a core collapse supernovae, the ejection of its envelope will push its companion outward. In some cases, this outward force will be strong enough not only to unbind the binary, but to send the second star whizzing out of the Galaxy.

This study expands upon previous studies of supernovae production of HVSs by performing a detailed Monte Carlo analysis. The Monte Carlo analysis determines the production rate and spatial distribution of HVSs by randomly sampling from predicted initial distributions and applying expected physical models. The initial parameters include inputs such as the expected number and spatial orientation of binary systems in the Galactic center, the expected spatial separation of the stars within those systems, and how much of the ejecta energy is imparted onto the companion star.

While the initial parameter distributions are physically motivated, it is important to note that these are underlying assumptions which strongly affect the results. In a simple example, if the binary fraction is actually 2 times lower than the input assumption, a Monte Carlo simulation will predict twice as many HVSs as there actually are. The physical models of supernovae explosions are also rather uncertain, which could strongly affect the Monte Carlo predictions. 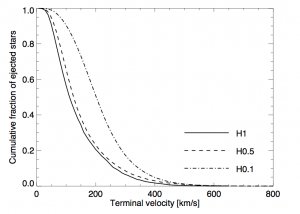 Zubovas et al. figure 2a. This figure shows a cumulative distribution of the velocities for stars ejected from the system. Only a small fraction of ejected stars have velocities high enough to escape the Galactic potential (~400 km/s)

The authors find that more than 93% of the time, supernovae explosions disrupt the binary system, ejecting the secondary; however, most ejected secondary stars in the Galactic center remain bound to the central supermassive black hole. Based on different initial model parameters, the ejection rate of binary companions from the Galactic center could be between ~ 4 – 25%. This corresponds to ejecting a star around once every 4 – 22 million years.

Zubovas et al. find that over 100 million years the highest speed HVS produced via supernovae explosions is ~ 500 – 700 km/s, indicating that this ejection method cannot explain the fastest known HVSs (~750 km/s). The predicted spatial distribution of HVSs formed by supernovae, like the observed population of HVSs, is not spherically symmetric. This is because the initial simulated population was anisotropic, and this quantity is preserved, which is also true for the Hills Mechanism. Overall, the predicted production rate of HVSs via supernovae is comparable to the production rate predicted for the Hills mechanism. This suggests the observed population of HVSs may have two progenitor populations.