All about bulges (and consequences for galaxy evolution)

It’s probably painfully evident from our posting history at Astrobites that galaxy mergers are a major component of the modern “hierarchical” theory of how galaxies evolve over time. At the most basic level, the idea is that spiral galaxies with well-structured, paper-thin disks merge with each other, causing randomizing dynamical disruptions which produce elliptical galaxies that are more spherical in shape. But galaxies come in many more flavors than spirals and ellipticals – just take a look at our galaxy glossary! Finding new clues to the cosmological history of galaxy mergers and their role in producing this diverse population is a great frontier in astronomy.

In their new work, these authors examine bulges in spiral galaxies. Bulges are structures found at the centers of some spiral galaxy disks. “Classical” bulges are spherical populations of stars that tend to be older than those in the disk itself — these bulges are often compared to elliptical galaxies (see e.g. the Sombrero galaxy, M 104). Some spiral galaxies are without bulge (“bulgeless,” e.g. M33). “Pseudobulges” fall somewhere in between — they are distinctly brightened central features of spiral disks, but they are flat stellar populations (not extending spherically above or below the disk) and don’t seem to be older. The Milky Way arguably is host to a pseudobulge. Cosmological simulations support the idea that the ratio of mass in the bulge to total stellar mass (B/T) increases as galaxies merge, but these simulations don’t seem to produce pseudobulges. 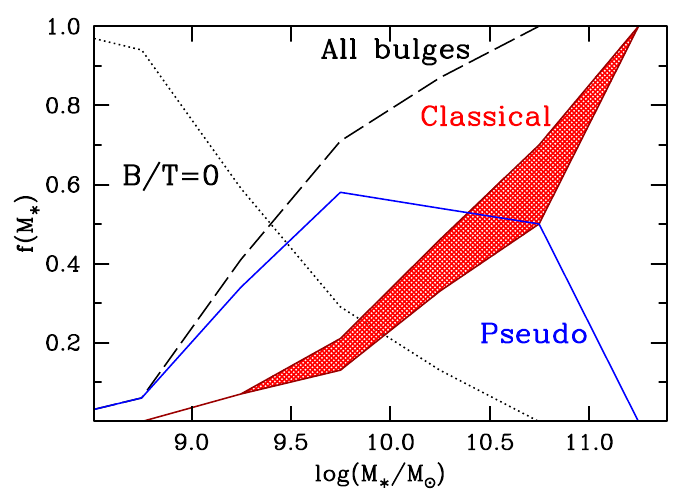 The fraction (f) of galaxies with classical bulges, pseudobulges, or no bulges at all (B/T=0) as a function of mass, in units of solar masses on a logarithmic scale. From Fisher & Drory (2011 Figure 3.

The authors look for classical and pseudobulges in nearby galaxies. From existing surveys in the literature, they compile a catalog of all galaxies above a certain brightness (15 magnitudes in the B band), within 11 megaparsecs (Mpc) of the Milky Way — a total of 320 galaxies.

For each galaxy they take the radial brightness profile and fit a two-component model, consisting of an exponential function describing stars in the disk and a Sersic profile of index n describing stars in the bulge. A smaller value of n describes a “boxy” bulge, that has a roughly constant brightness until it reaches some cut-off radius, where the brightness goes to zero. They classify bulges where the fitted value of n is greater than 2 as classical bulges, and less than 2 as pseudobulges. They estimate B/T by integrating the brightness profiles of these components. They mask out (ignore) other structures in disks, such as bars and rings. Finally, they estimate the star formation rate (SFR) of each galaxy using a combination of far-ultraviolet (FUV) luminosity (which traces the amount of hot, young tars),

The authors find that about half of local galaxies have pseudobulges, while only about 1/6 have classical bulges. They find that smaller galaxies (

) tend to be bulgeless, intermediate-mass galaxies (

) tend to have pseudobulges, and only the rare, most massive galaxies (

They conclude that pseudobulges evolve secularly (steadily over long periods of time), rather than via episodic merger events. They argue that cosmological simulations tend to vastly overproduce classical bulges, indicating that we are not perfectly modelling the role of mergers in galaxy evolution. They suggest that simulations overstate the role of mergers in dynamically disrupting disks or that they include too many mergers.

Understanding how pseudobulges are different from classical bulges and how they form promises to be an important field in the coming decade. In particular, it has recently been suggested that pseudobulge properties do not correlate with supermassive black hole mass in the same way that elliptical galaxy and classical bulge properties do, challenging our existing theories of galaxy evolution. However, recent discussions highlight the difficulty in measuring the properties of bulges and interpreting these results.

Reconstructing the Past: Metallicity Abundances in Dwarfs