Figure 1- An artist’s conception of the structure in our Milky Way Galaxy, including the spiral arms and the peanut-shaped bulge at the center of our galaxy. Image credit: ESO

One of the most important parts of our Milky Way galaxy is the galactic bulge, located in the galactic center about 27,000 light years away from Earth.  Containing an estimated 10 billion stars, recent surveys have shown that our Milky Way has a small “boxy” or “peanut-shaped” bulge (see Figure 1), and traditionally the bulge was believed to have an exclusively old stellar population.  Such observations are very important for astronomers who are interested in constraining theories of galaxy formation, as our Milky Way is fairly typical when compared to other similar disc galaxies.

The paper focuses on a question that recently arose when new stars in the galactic bulge were discovered that appear to be far younger than previously expected.  Numerous photometric studies in the past and studies of the color-magnitude diagrams of stars in the galactic center have supported a very old bulge population of stars, where all the stars are older than 10 billion years.  Recent studies using gravitational microlensing, however, allowed the ages of individual bulge stars to be determined and showed that the more metal-rich stars in the bulge also had a stellar age range of 3-12 billion years.  Such young stars were unexpected and their presence raised questions about galactic formation as we currently understand it.  The classic model of bulge formation involves exclusively older stars that formed rapidly before the galaxy’s disk itself formed, either through dissipation or galactic mergers, but younger stars imply the bulge formed through internal disk instabilities.  So how did our Milky Way get its shape? 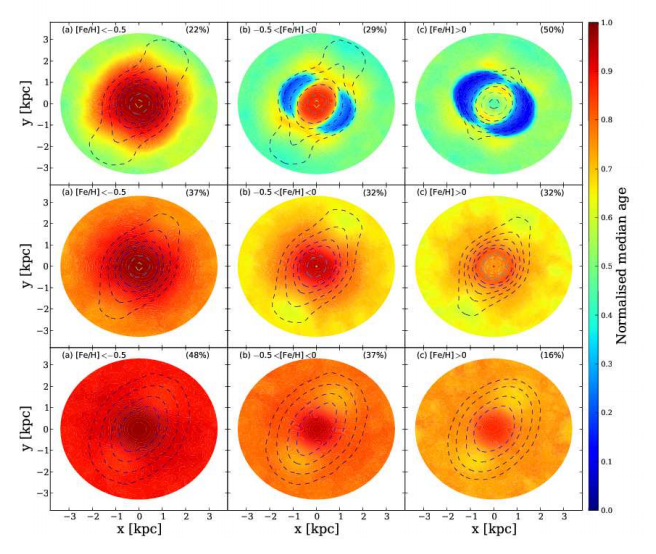 Figure 2- The median age of stars in the inner region of the simulation to a radius of 3 kiloparsecs. The three slices from top to bottom are from z= 0-0.14 kpc, z= 0.14-0.42 kpc, and 0.42-0.85 kpc. The sub-panels are for stars with different metallicities, and the percentage of stars in each metallicity bin is mentioned in the sub-panel. From Ness et al.

In this paper, the authors ran a simulation of the formation of a galaxy that contained 10 billion stars and a spatial resolution of 50 parsecs- a simulation that had a higher resolution than previous models that were either semi-analytic or cosmological simulations which did not have small enough resolution to study a small bulge.  The galaxy itself formed when a dark matter halo cooled under self-gravity and formed a galaxy with a small bulge, and the simulated galaxy formed in isolation with no effects from other galactic mergers in its history.  After allowing the model to evolve ten billion years, the resulting structure was studied at greater detail and resolution than previous simulations had allowed.

What the authors found from their simulations is that the number density of young stars depends on latitude- they were strongly concentrated close to the disc plane, there was a sharp transition between the young and old stars as the latitude changed, and the oldest stars were further from the plane but more centrally located (see Figure 2).  Further, when considering the metallicity of the stars the authors found that there was an age distribution: at a given height from the galactic plane, stars which were more metal-rich would be younger than the metal-poor ones.

From their results, the authors conclude that the Milky Way’s bulge formed as part of the natural evolution of the disc over time, which explains the observed ages of both the older and younger stars.  Galactic mergers still could have occurred during the Milky Way’s history, but they are not necessary to create the galaxy we see today- an idea at odds with the scenario that the bulge must have been accreted.  The authors indicate that from their study it is clear that observations need to be taken of the ages of individual bulge stars to understand the age range better, and to determine what fraction of stars, if any, are part of a merger remnant.