In 2019, the Event Horizon Telescope (EHT) Collaboration released the first ever image of a black hole. They used a network of telescopes across the globe and found that the black hole, located 55 million light years away in the M87 galaxy, has a mass that is 6.5 billion times that of the Sun. Their images and measurements took the world by storm, and now the collaboration has released new results based on the polarization near the black hole. The group released two papers this week: the first detailing the polarimetric observations (Paper VII) and the second discussing models of the magnetic field structure of the black hole (Paper VIII).

The M87 black hole emits radio light because of synchrotron radiation. The material surrounding the black hole is a plasma, and is therefore full of electrons and ions. Those charged particles move close to the speed of light. When they encounter a magnetic field, they spiral around it and release radio waves, which can then be detected by the EHT.

Synchrotron radiation is usually extremely polarized (near 70%), which means that the light is mostly oriented in a single direction. Astronomers can use the polarization of light from a given black hole to trace the magnetic field, since its orientation is perpendicular to the direction of the magnetic field.

Because of the low polarization, the EHT collaboration proposes that something else must be going on in the material around the black hole: Faraday rotation. In Faraday rotation, the polarization gets scrambled and essentially cancels itself out as the light moves through the magnetized plasma.

A Not So Simple Magnetic Field 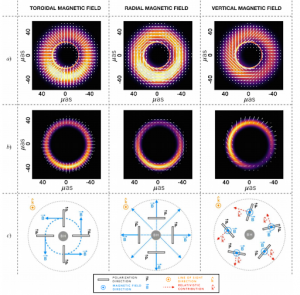 Figure 2. Ideal magnetic field scenarios near the black hole. The bottom row shows the orientation of the magnetic field and the top/middle rows show the resultant polarization vectors. See Figure 3 in Paper VIII.

Polarimetric measurements like these provide constraints not only on the magnetic field, but also on things like how much mass the black hole is accreting and the power of its jet. By comparing observations to models, astronomers will continue to unlock the structure and secrets of black holes.

When the Sky Isn’t the Limit: Simulations of Imaging a Black Hole from Space

Historical Flares of Sgr A*: A Polarizing Event?