A new kind of changing-look AGN?

Accreting supermassive black holes at the centers of galaxies are some of the most powerful objects in the Universe, outshining even their host galaxies. These active galactic nuclei (AGN) exhibit strong variability in their luminosity and emission lines. Some AGN show very broad emission lines in their spectra coming from high velocity gas orbiting near the black hole, while others only show narrow emission lines. AGN are typically classified based on the existence of these emission lines as Type-1 (broad emission) or Type-2 (no broad emission). Why some AGN don’t show broad lines in their spectra is still up for debate—some AGN, known as changing-look AGN, have been observed to actually switch types!

The subject of today’s paper is a nearby AGN called 1ES 1927+654, originally classified as Type-2, that was actually observed in the act of changing types. In early 2018, this AGN was observed to become optically brighter and later develop broad hydrogen emission lines. Today’s paper presents a monitoring campaign for 1ES 1927+654 over a period of 450 days in X-ray (XMM-Newton, NuSTAR, NICER) and UV (Swift) wavelengths showing some unusual X-ray properties.

The case of the missing corona

Most X-ray emission in AGN comes from the corona, a region of hot plasma surrounding the accretion disk. In X-ray spectra, this emission is typically described as a power-law with the addition of a blackbody from reprocessed emission.

The left panel of Figure 1 below shows the X-ray spectra of 1ES 1927+654 a few months after the appearance of optical broad emission lines (the changing-look event). This spectrum appears to be dominated by low energy X-rays producing blackbody emission and lacking the typically-observed power-law. Before the changing-look event, best-fit models of the AGN’s X-ray spectra had a significant contribution from a power-law—so what happened to this corona emission?

Figure 1. X-ray spectra of the changing-look AGN. Left: June 2018 observations from XMM-Newton shown as blue and orange crosses. The best-fit model (red curve over the data) is separated into components presented as different colored dashed and dotted lines: blackbody (cyan), power-law (black), 2 gaussians (dark orange and green). The emission is dominated by the blackbody component. (Top panel of Figure 3 in the paper.) Right: December 2018 observations are shown as blue (XMM-Newton) and orange (NuSTAR) crosses. The emission shows more contribution from the power-law component. (Middle panel of Figure 3 in the paper.)

Even more curious, later observations in December 2018 (right panel above) and May 2019 show 1ES 1927+654 becoming brighter and more of a power-law appearing at higher energies. Figure 2 below gives a more detailed look at the relative contribution from the corona emission (the power-law). This indicates that as the AGN becomes brighter, eventually the power-law actually dominates the emission just as it did before the changing look event! 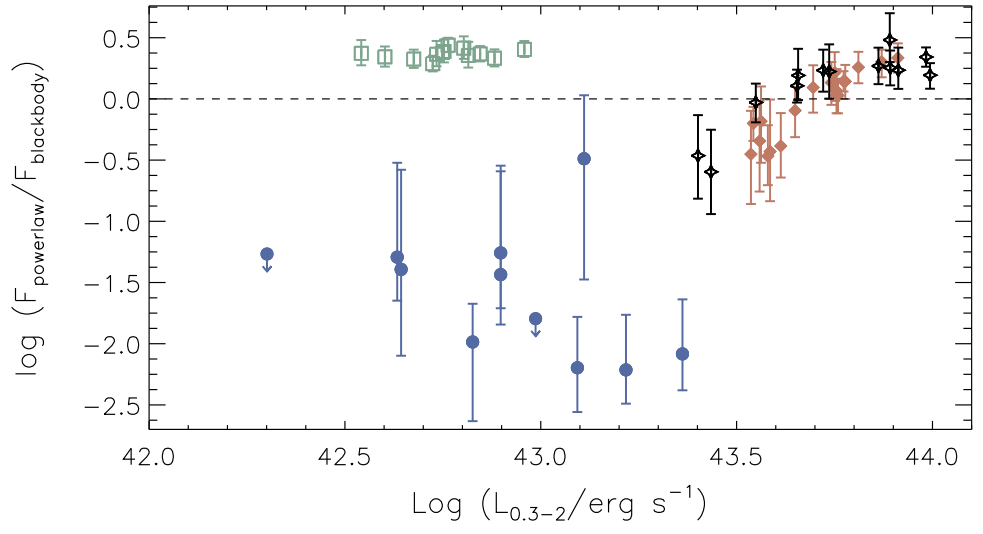 Figure 2. Ratio of the power-law and blackbody components of the X-ray emission vs the AGN luminosity for different observing dates. Data from previous work before the changing-look event is shown as green squares. Data from this paper is shown as blue circles (June 2018), red diamonds (December 2018) and black stars (May 2019). (Bottom left panel of Figure 13 in the paper.)

Other strange features of the observations are two unknown gaussian emission lines present in the spectra at 1 keV and 1.8 keV (Figure 1) as well as strong variability in the lightcurves (not shown here, see Figures 5 and 6 in the paper) that changes both in timescale and energy range for the different observing dates.

While observations of changing-look AGN are becoming more common, this disappearing corona emission had not been observed before. It’s possible that due to a catastrophic event, the corona was actually destroyed.

One possible event that was proposed by the authors is that a star was tidally disrupted by the accretion disk, destroying the corona in the process. The reappearance of the power-law emission could also imply that the destroyed corona is in the process of forming again!

Understanding the molecular outflow in NGC 1266