Status: Published in The Astrophysical Journal, open access on arXiv

Massive young stars heat the interstellar material around them, creating HII regions, or areas full of ionized hydrogen. As the stars push stellar wind and UV radiation outward, their HII regions expand, and a balloon of interstellar material begins to collect around the central star. Surrounding gas and dust is swept up by the balloon, and the magnetic field changes.

The Balloons In Star-Forming Complex S235

S235 contains three HII regions, which are labeled in Figure 1 as S235 Main, S235AB, and S235C. The star symbol shows the central ionizing star for S235 Main, while the crosses show the same for the smaller HII regions. Past studies have identified many young stellar objects (YSOs)  in this field. The white dashed boxes show where clusters of those baby stars are located. Many of the YSOs are located right on the edge of the largest inflating, balloon-like HII region. 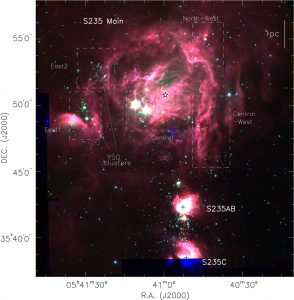 Figure 1. The S235 field of view in the infrared. There are three HII regions, which are seen as the pink, roughly circular structures. Each has a central ionizing star. Clusters of young stellar objects are traced in the white dashed rectangles. See Figure 1 in the paper.

It’s important to make sure that the polarization measurements used in this study are actually behind the HII regions. Otherwise, they aren’t examining the magnetic field in the right place. The authors filtered out foreground stars using Gaia distances and constraints on the extinction, or amount of dust that must be present towards a star. They also threw out the polarization data from young stellar objects, which create their own polarization from their circumstellar disks. 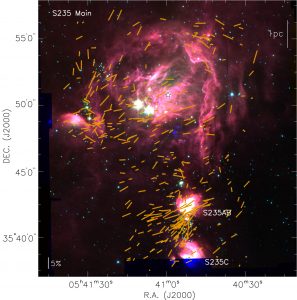 Figure 2. Polarization measurements for stars behind the S235 complex. The vectors trace the magnetic field, which appears to follow the outskirts of the largest HII region bubble. See Figure 8 in the paper.

Using maps of gas and dust intensity, today’s authors also identified 11 main clumps of interstellar material in the field of view. They measured the magnetic field strength in those clumps and found that the magnetic energy was dominant over both turbulence and gravity. The  magnetic field is actually so important that it has slowed star formation, bringing it to a halt.

But the presence of YSOs means that star formation had to happen at some point in the past. The authors suggest a timeline of events: 1) Before the HII region expanded, the magnetic fields and gravity balanced out, creating an equilibrium. 2) As the HII region began to expand, it created dense regions and turbulence, which caused the gas and dust to collapse and stars to form. 3) The turbulence decayed and the magnetic field became more important. It started regulating and stopping star formation, leading the region to look how it does today.

This new understanding of how magnetic fields and HII regions are related is crucial to compiling an overall picture of star formation. But the overall process is complicated and involves so many moving parts that there is still much to be learned about how stars are born!

All Aboard The Filament Express

Don’t Cool Your Jets Quite Yet!