“Cool metal gas search!” Thanks! It was automated.

Title: Characterizing the abundance, properties, and kinematics of the cool circumgalactic medium of galaxies in absorption with SDSS DR16

The circumgalactic medium—the halo of gas surrounding galaxies—could play a large role in galaxy evolution, as it regulates the availability of gas for the galaxy. The origin of this gas is still not completely understood. It can come from the galaxy itself in the form of outflows from active galactic nuclei (AGN) or supernovae, as well as infalling gas from the intergalactic medium (IGM).

One way to study the CGM is using the spectra of bright background sources such as quasars (check out this astrobite for a quick guide on how spectroscopy works!). Quasar spectra (example in Figure 1) show continuum emission that comes from the hot accretion disk, as well as broad emission lines from gas orbiting near the supermassive black hole. Quasar spectra also exhibit absorption lines. Some of this absorption comes from gas in quasar accretion disk winds, but some of it has nothing to do with the quasar at all!

As light from the quasar travels towards us, some of it gets absorbed by the cool gas surrounding galaxies in our line of sight, showing up as absorption lines in the quasar spectrum. Since the wavelengths and shape of these lines are dependent on atomic physics, this tells us what types of elements are present in the CGM and properties of the gas. Many of these studies focus on absorption from singly ionized magnesium (Mg II) gas since it can be observed from the ground and it tells us about the nature of “metals” around galaxies.

The authors of today’s paper looked for this metal-rich cool gas in the spectra of ~1 million quasars from the Sloan Digital Sky Survey (SDSS). Visually inspecting that many spectra would be quite an undertaking! Instead, the authors developed an automated pipeline to detect absorption lines, resulting in the largest catalog of Mg II “absorbers” so far.

The search for absorbers

In total, the authors find a sample of ~160,000 Mg II absorbers and analyze their properties such as equivalent width, as well as try to identify any additional, less prominent absorption from other metal gases like silicon and carbon which are also usually present in these absorbers.

In order to understand the relationship between the gas that surrounds galaxies and the galaxies themselves, the authors look at two subsets of galaxies: emission line galaxies (ELGs, star-forming) and luminous red galaxies (LRGs, no star formation). These galaxies were also obtained from the SDSS. 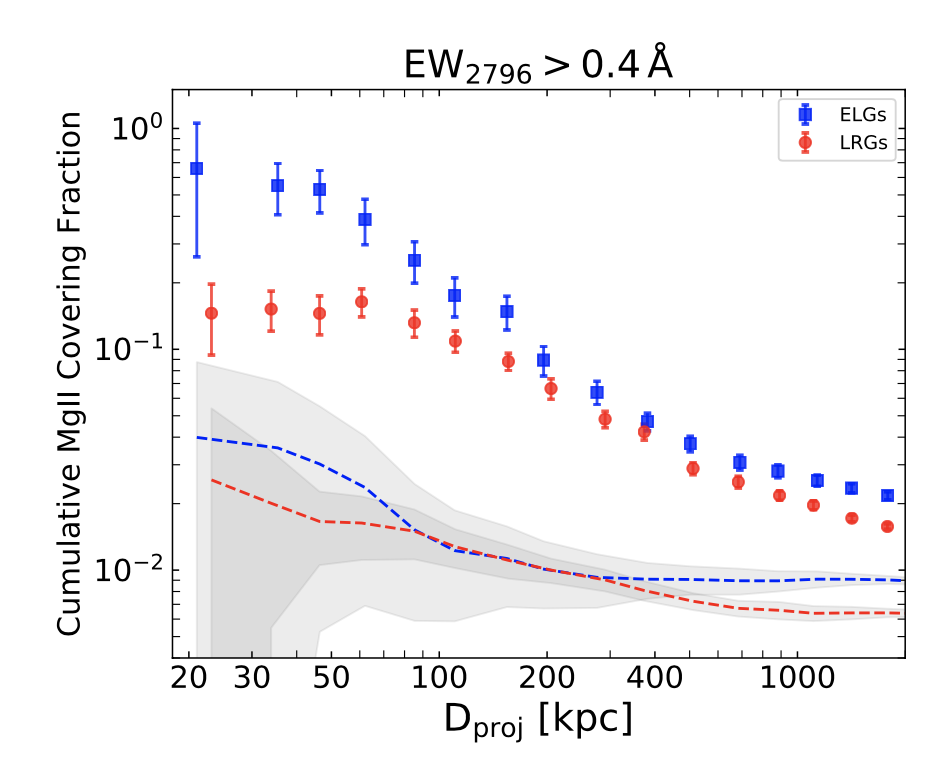 The authors also look at the dependence of this covering fraction with galaxy properties like the stellar mass and star formation rate (SFR). For the LRGs, there is an anti-correlation between the covering fraction and the mass of the galaxy that comes from stars. The more massive the LRG, the less cool gas it has surrounding it.

These different trends for ELGs and LRGs of covering fraction with galaxy properties could hint at a different physical origin for these Mg II absorbers that depends on whether the galaxy is star-forming or not. The CGM around a star-forming galaxy for example, might have more gas that comes from outflows. Large systematic searches like these set the stage for future large scale surveys to better understand the nature of cool metal-rich gas surrounding galaxies.

Testing the Limits of Galactic Clouds