In this series of posts, we sit down with a few of the keynote speakers of the 238th AAS meeting to learn more about them and their research. You can see a full schedule of their talks here, and read our other interviews here!

Dr. Daniel Stern starts our interview by explaining how his job at NASA’s Jet Propulsion Laboratory (JPL) differs from one in academia. “If you’re a professor at a university, the model is that you do half research, half teaching.  At JPL the model is that you do half mission work, half research. Mission work can be anything from writing mission proposals to doing calibrations to being the Principal Investigator (PI) of a mission. And generally we end up being involved in several missions over a NASA career.” He continues, “My most prominent role is as Project Scientist for NuSTAR, a role I’ve had since before launch. I support the PI in a variety of ways.  My AAS talk will celebrate the nine years (so far) of NuSTAR in orbit, presenting a few scientific highlights of the mission.”

NuSTAR is a space-based X-ray observatory whose primary mission is to “observe X-ray emitting astrophysical objects.”  To Dr. Stern, amongst the biggest breakthroughs made with NuSTAR have been the discovery of the origin of Ultra-Luminous X-ray Sources (ULXs) and the absolute calibration of the Crab pulsar. “When you take an X-ray image of a nearby galaxy, the nucleus is often bright. [This is from] the AGN (Active Galactic Nucleus), no surprise. But starting 20-25 years ago with the first focusing X-ray telescopes, you’d see bright X-ray sources in the outskirts of a galaxy, often rivaling the nucleus,” says Dr. Stern. Astronomers named these sources ULXs, and prior to NuSTAR, their origin was contentious. The big debate prior to NuSTAR was if these bright outskirt sources were intermediate mass black holes (i.e., ~1000 solar mass black holes) accreting at a typical 0.1 – 1 Eddington rates of actively accreting sources such as quasars, or were they typical black holes formed in supernovae (i.e, tens of solar masses) accreting at Super-Eddington rates. “The debate was going on for 15 years between these scenarios,” Dr. Stern explained.

Solving this mystery came almost as an accident, and it came from observations of SN 2014J – the nearest Type Ia supernova in ~150 years! “We [at NuSTAR] ended up spending about three or four weeks staring at 2014J in M82.  Serendipitously, while we were getting all this information on 2014J, we also obtained an unprecedented high-energy, sensitive time series on a ULX in the same galaxy. One of the postdocs working on the project, Matteo Bachetti, did a timing analysis and realized that this ULX was pulsating with a 1.4 second period! X-ray astronomers know that if you see pulsations like that, it’s a neutron star; black holes just can’t do that. So suddenly this debate as to whether ULXs are small black holes or big black holes was answered:  ‘None of the above. They’re neutron stars!’” Or, at least, some of them are neutron stars.

According to Dr. Stern, “one of the hidden secrets of X-ray astronomy is that we don’t know the absolute calibration.  In X-ray astronomy, the standard unit is the Crab (defined as the X-ray luminosity of the Crab pulsar), but no one really knew exactly how bright the Crab was in physical units. Chandra and XMM-Newton (two other prominent X-ray satellites), for example, get calibrations that differ by ~10%. To really measure the absolute calibration well, you need to understand your system, your optics, your detector in extreme detail.”

To solve this disagreement, the NuSTAR team used what they originally considered a design challenge necessitated by launching in a compact, stowed configuration. “NuSTAR has a 10-meter mast that separates the optics from the detectors. Scattered  light is able to get through this long focal path onto the detector through little gaps in our shielding. This initially was annoying, and we planned observations to minimize it. Then one of our instrument scientists, Kristin Madsen, realized we could use the scattered light to our advantage.” By pointing the telescope just a few degrees off from the Crab, we could bypass the complicated optics and observe the Crab directly with our well-characterized detectors. This allowed NuSTAR to obtain an absolute calibration of the Crab.

Unlike the stereotypical personal-statement astronomer, Dr. Stern did not fall in love with the stars as a young child. “I feel like half of astronomers wanted to study the celestial sky since they were kids, perhaps after seeing a comet or an eclipse. The other half are physicists who fell into astronomy.  Unfortunately, and unromantically, I’m from the latter half,” says Dr. Stern of his start to a career in astronomy.

“My first summer of grad school I was thinking I would go into theory. Talking with my advisor, the theorist Joe Silk, we thought it’d be useful to do a little observational experience. That first summer observation experience is still going on.” His first summer project? Being a “first-generation” user of Keck. “Keck had just come online. All through graduate school, every time we went to Keck, we’d get multiple publishable papers per observing run, seeing things that nobody had seen before, finding the highest-redshift object (again, again, and again…), etc…”

In reference to his success as a “first-generation user,” Dr. Stern leaves this as advice to current students, “Keep an eye out for what facilities are coming up in the next years, because technology really changes things. We are lucky enough in astronomy to be in a field where every year or two we’re getting a 10x improvement in some regime – resolution, sensitivity, temporal coverage, … It’s overwhelming that the universe has so many mysteries, but you can prepare yourself a little bit by seeing what’s coming.”

To hear more about the discoveries made in the nine years of NuSTAR, tune into Dr. Stern’s Plenary Lecture at 5:50 PM ET on Wednesday, June 9 at #AAS238! 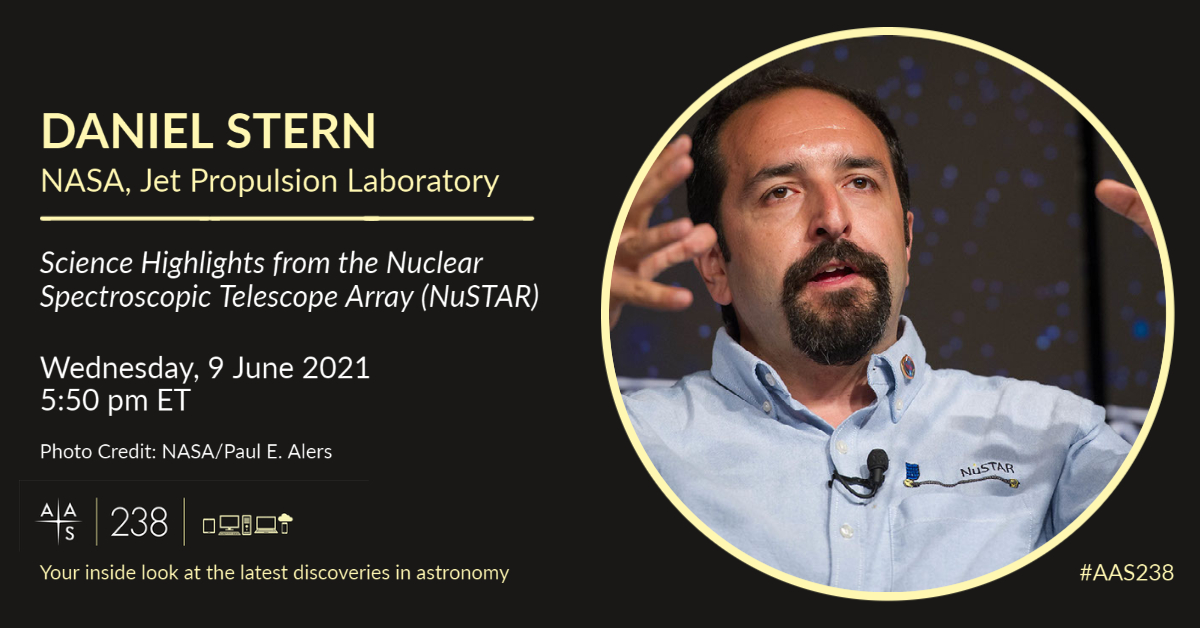 Huei Sears is a fourth-year graduate student at Northwestern University studying astrophysics! Her research is focused on long Gamma-Ray Burst host galaxies. In addition to research, she cares a lot about science communication, and is always looking for ways to make science more accessible. In her free time, she enjoys walking along the lake, listening to Taylor Swift, & watching the X-Files.