Are Planets Formed in Sticky Environments? 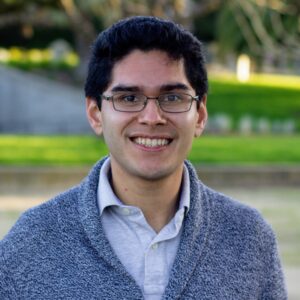 This guest post was written by Tony Rodriguez, a first-year graduate student in the Astronomy Department at Caltech. His research currently spans from studying outbursting young stars to finding stellar-mass black holes with microlensing. Outside of research, he enjoys music and songwriting, and finding breaks to go on runs around Pasadena and the LA area.

Author’s Institutions: Department of Applied Mathematics and Theoretical Physics, University of Cambridge and the Institute for Advanced Study

Status: Published in The Astrophysical Journal. Open access on ArXiv.

For a long time, one of the most enigmatic and fascinating open questions in astronomy was: are there planets around other stars? Exoplanets, as they came to be known, started to be discovered by astronomers in the 1990s, and opened up an entire new branch of astronomy. And as new planets started to be discovered and classified with exciting designations such as hot Jupiters, super-Earths, and even examples of Tatooines, a deep and fundamental question started to emerge: how do these planets form? How did so many different types of planets even come to be? This deceptively simple, yet profound question still plagues astronomers around the world to this day. In a 2016 study, Dr. Roman Rafikov investigated a sample of observed protoplanetary disks, the environments in which planets are formed, and found evidence that a fundamental physical mechanism previously thought to be at play in these disks (that makes them “sticky”!) may be far less understood than previously thought, or not present in these environments at all.

To understand our current picture (except this picture isn’t perfect!) of planet formation, we must place it in the context of star formation. Our basic idea of star formation begins with a cold cloud of gas and dust slowly collapsing down into a denser and denser ball that begins to heat up and up until it becomes a star. Along the way, however, there forms a disk of gas and dust around the star that feeds it matter, called an accretion disk. They are called accretion disks because they allow matter to “accrete”, or build onto the central star. A useful analogy is that gas and dust in the disk behave like the needle on a vinyl record, starting at the outside and slowly falling in towards the center after many turns. 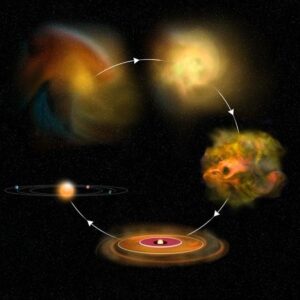 Figure 1. Heuristic picture of star and planet formation. Following the arrows, we see that the sparse, cold cloud of gas and dust collapses and grows denser until a star is formed at the center with an accretion disk to feed it mass. Planets then form in this disk, eventually leading to a system like our Solar System with fully formed planets orbiting their parent star. Credit: Saxton, B., NRAO/AUI/NSF.

Planets are believed to mostly form in these disks, which are often referred to as protoplanetary disks in the scientific literature to distinguish them from accretion disks in other environments. We can actually see, using facilities like the Atacama Large Millimeter Array (ALMA), rings and gaps forming in these disks – signatures of planet formation – through detailed images such as the ones in Figure 2. 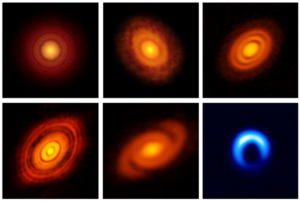 Figure 2. Directly resolved protoplanetary disks by ALMA. The central star is fed matter only through the innermost region of the disk, while gaps and rings form in the outer disk that indicate that planet formation is taking place. Protoplanetary disks that appear elongated are actually almost circular, but we are just viewing them from a tilted, or inclined, perspective. Credit: ALMA (ESO/NAOJ/NRAO)

So, Are These Disks Sticky?

Going back to our analogy of accretion disks transporting matter inwards like a needle on a vinyl record, we can see that the only reason that the needle spirals inward is because the grooves guide it to do so. In accretion disks, there’s no reason that a blob of gas in the disk should do the same without something to guide it inward as well. With gravity being the only force at play, then the blob of gas should stay in a stable orbit.

But matter indeed falls inward! Simply put, particles in an accretion disk need to lose energy (more precisely, angular momentum) in order to spiral inward. A previous Astrobite summarized one of the seminal works in explaining this phenomenon in accretion disks by Shakura and Sunyaev in 1973. They explained that some friction in the disk, or more precisely, some viscosity in the mathematical equations that govern the disk, causes this energy loss in accretion disks. The loss of energy to viscosity is exactly why honey is so hard to squeeze out of a bottle – honey is sticky and accretion disks could be, too! When you squeeze water out of a bottle, it flows freely and uninhibited, but honey, which is a more viscous fluid than water, flows much more slowly due to the energy lost to viscosity. Because material in accretion disks has some viscosity, it must spiral inward toward the star. Crucially, Shakura and Sunyaev came up with the Shakura-Sunyaev equations that summarize the unknown physics of what causes this viscosity in accretion disks using a single parameter, α. 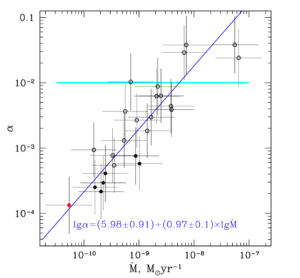 Figure 3: Relationship between measured accretion rate, Ṁ, and computed disk viscosity parameter, α. If protoplanetary disks were governed by a single value of α, then we would expect the points to cluster around the horizontal cyan line. Instead, we see a correlation between the two parameters described by the equation in blue. Fig. 5 in the original paper.

In his paper, Dr. Roman Rafikov studies 26 protoplanetary disks directly resolved (directly imaged with enough resolution to reveal the disk structure) by ALMA. Using previous studies, he obtains the accretion rate (rate at which matter falls into the central star) of each disk, and with the new data as well as the Shakura-Sunyaev equations, is able to compute the viscosity parameter, α, of each disk. He finds that the viscosity parameter is correlated with the accretion rate, but not with other parameters of the disk such as the disk mass or outer radius of the disk. The correlation is shown graphically in Figure 3. But there is no reason to expect such a correlation! The accretion rate is a local parameter: it only has to do with what is going on at the innermost part of the disk, once mass actually falls onto the star. In contrast, the viscosity parameter is a global parameter: it encapsulates the properties of the disk material as a whole.

So, what does this mean for our understanding of planet formation? Rafikov proposes three hypotheses that can explain why this mysterious correlation between accretion rate and viscosity exists: