There are three main ingredients that make up a galaxy: stars, which are responsible for most of the visible light produced by a galaxy, gas (mostly hydrogen), which can be detected at other, non-visible wavelengths, and dark matter, which makes up the vast majority of the mass in galaxies. The first two, gas and stars, can be fairly easily detected by telescopes. Strangely, though, the main ingredient, dark matter, is the hardest one for us to find.

So far, we’ve not been able to detect this mysterious type of matter directly, as it appears that dark matter doesn’t interact with anything (including light), except via gravity. Because dark matter does interact gravitationally, we can infer its existence by observing how it affects the visible material in galaxies. For example, by measuring the speed at which stars orbit the centre of a galaxy, we can calculate the mass of a galaxy necessary to produce these speeds. What we find for most galaxies is that this mass is much greater than the mass of stars and gas that we can see in these galaxies. This therefore tells us that there is extra, invisible matter in the galaxy, contributing to its total mass. 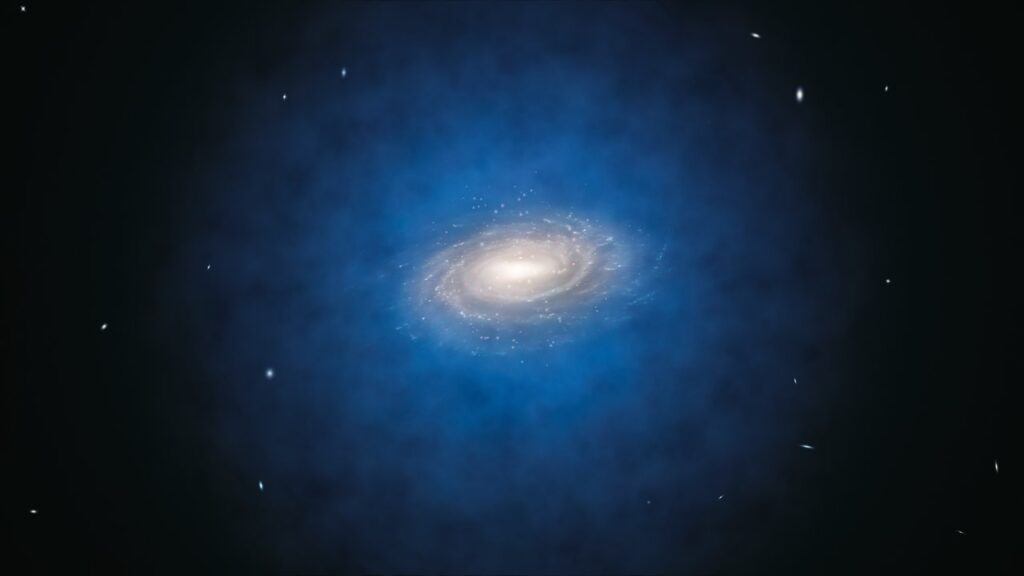 Figure 1: Artist’s impression of the dark matter halo (shown in blue) that surrounds most galaxies in the Universe (credit: ESO/L. Calçada).

For most galaxies, this dark matter makes up a large “halo”, with the visible galaxy material in its centre, where the dark matter density is greatest. However, today’s paper by Collins et al. presents evidence of a galaxy that has a different composition. This wacky character goes by the name of Andromeda XXI (or, as it’s known to its friends, And XXI).

Say hello to our little friend

And XXI is a dwarf galaxy in orbit around Andromeda, the closest major galaxy to the Milky Way. And XXI is a small galaxy, with a half-light radius of about 1 kiloparsec (Milky Way-sized galaxies have radii of tens of kiloparsecs). However, Collins et al. are not satisfied with just studying the stars in And XXI, and in this work they use observations of stars in this galaxy to characterise the dark matter halo in which it is embedded.

The authors use spectroscopic data from the DEIMOS instrument, which is mounted on the Keck II telescope at Mauna Kea, in Hawaii. By measuring the positions of absorption lines in the spectra of individual stars, they calculate their velocities by measuring the Doppler shift for each star — this is a change in the measured wavelength of an absorption line, caused by the star moving towards or away from us and so being blueshifted or redshifted. The authors are able to determine the velocities of 77 stars in And XXI, with impressive precision (less than 5% error). They then use these velocities to calculate statistical properties for And XXI such as its velocity dispersion, a measure of how much spread there is in the velocities of stars in the galaxy, relative to the average velocity. Finally, they use the motions of these stars to find what the gravitational potential of And XXI must be to produce the observed distribution of stars, and hence infer the distribution of dark matter.

What the authors find is strange. While dark matter is still the overwhelming flavour in this galaxy, And XXI contains between three and five times less dark matter than we would expect in a galaxy of this size, based on theoretical predictions from large computer simulations. But why? As far as Collins et al. are concerned, there are three possible explanations. 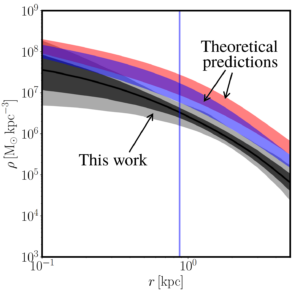 Instead, the authors explain their observations with tidal effects, in addition to a small amount of smoothing from dark matter heating. As And XXI approaches Andromeda, tidal forces from Andromeda can strip dark matter from the dwarf galaxy’s halo, resulting in the And XXI that we observe today, with little dark matter. This tidal stripping is similar to the stripping of stars that can occur when they pass close to black hole (see this Astrobite). The dark matter deficit in And XXI indicates that it must have experienced quite extreme tidal effects. This means that it must have come very close to Andromeda in its past, probably within 20 kiloparsecs, and so is likely on a very eccentric orbit. Future observations should be able to confirm whether this is the case.

There is, however, a third (and slightly more unusual) explanation. Modified Newtonian dynamics (MOND) is an alternative theory to dark matter. It proposes that the evidence we see for dark matter can instead be explained by changes to Newton’s laws of motion, and that dark matter should not be included in our models of the Universe. This theory is quite controversial, but interestingly, the observations in this work agree with the predictions from MOND. The authors finish by saying that And XXI will be of interest for future work — this is certainly true, particularly for anyone interested in challenging our current ideas about galaxies, dark matter and gravity.