A Metal-Poor Intergalactic Gas Cloud in the Early Universe

This guest post was written by Farhan Hasan, a PhD student in the Astronomy department at New Mexico State University. His research uses quasar absorption lines to understand how gas cycles in and out of galaxies and how that affects galaxy evolution across cosmic time. He plays bass guitar, ukulele, and melodica, and is an aficionado of music, art, sci-fi, hiking, exercising, and cooking. Farhan cares deeply about fighting climate change and dearly hopes we will discover extraterrestrial lifeforms before he passes. 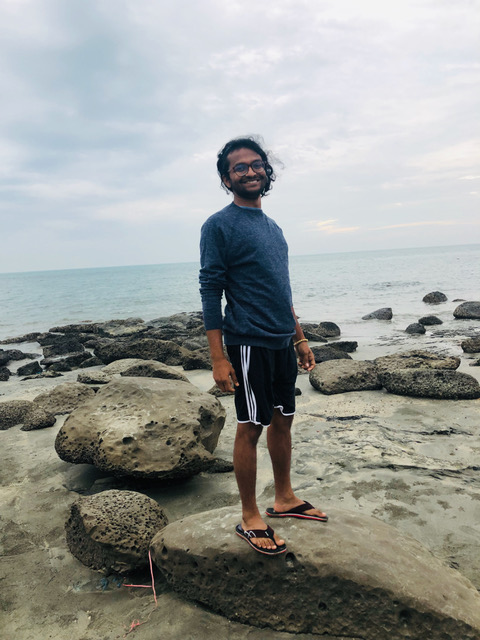 Title: ​Exploring the origins of a new, apparently metal-free gas cloud at z = 4.4

Though the space between galaxies may seem empty, it actually contains particles that can tell us a lot of information. The space surrounding galaxies is called the ​circumgalactic medium (CGM)​ and the space between galaxies is called  ​intergalactic medium (IGM)​. The CGM and IGM contain gas that had once lived inside a galaxy, as well as gas that can provide fuel for future star formation in a galaxy. Therefore, this intergalactic gas is like a fossil that records how galaxies grow across cosmic time. One of the most widely-used techniques for studying this gas is absorption line spectroscopy which relies on the spectrum of a smooth, bright background light source such as a ​quasar​. Since the quasar’s light can shine through the diffuse gas, we can use it to observe matter which would otherwise be invisible to us. Each individual gas cloud causes “dips” in a spectrum, which are called absorption lines (see Figure 1). Using some knowledge of atomic physics, we can figure out what kind of atoms or ions are present and how much of each atom or ion there is in the gas cloud.

In this paper, the authors use a very high-quality spectrum of a quasar observed with the ​HIRES​ instrument on the ​Keck observatory​ in Hawaii to study an intergalactic gas cloud that appears to contain almost no metals (here “metals” are elements heavier than helium).

The authors first determined how far the gas cloud is from us using its redshift. As space expands, the light from objects gets stretched, increasing its wavelength. Therefore any absorbed or emitted light from them would be shifted to longer, i.e. “redder,” wavelengths. The further away an object is, the faster it is moving away from us and the higher is its redshift. The redshift of this gas cloud, which they call LLS1723, was found to be ~4.39, which means the light was absorbed by this object over 12 billion years ago!

After determining how far away the object was, the authors looked at the metallicity of LLS1723 (which tells us the proportion of material in the gas cloud that is heavier than hydrogen and helium) While they detected quite a substantial amount of hydrogen, they found negligible quantities of metals like carbon, silicon, and oxygen. In fact, they could only place ​upper limits​ on the density of metals in LLS1723. This enabled them to measure an upper limit on the metallicity of LLS1723, which was <10^-4.14 times the sun’s metallicity. Thus, LLS1723 has at most about 1/10000 the metallicity of the Sun! This makes LLS1723 one of the most metal-poor intergalactic gas clouds ever detected.

Where Did It Come From?

The presence of such metal-poor intergalactic gas clouds is rare, as shown in Figure 2, and compels us to ask where they come from. The authors used results from theoretical simulations to understand the origins of LLS1723. These suggest that one of two scenarios is most likely to describe where it comes from: 1) it is a pristine gas cloud in the IGM where very few metals had ever arrived from nearby galaxies in 1.5 Gyr, or 2) it was provided with some metals from a supernova explosion in the early universe.

Just like stars today, the first generation of stars in the universe, the so-called “Population III” stars (which showed up a few hundred million years after the Big Bang), exploded in supernovae to produce large amounts of heavy metals that would be blown away to large distances. The orange shaded region in Figure 2 shows the predictions, from a set of simulations, of the metallicity that a gas cloud could obtain as a result of such a supernova explosion. Since the upper limit of LLS1723’s metallicity falls well within this predicted range, it is quite possible that it was enriched by metals from one of the first stars to ever exist. Some detailed calculations show that it would take the explosion of an ancient star roughly 60 times the mass of our Sun to produce the metallicity seen in LLS1723. Interestingly enough, no Population III star has ever been directly observed. The observations of LLS1723 give us some exciting potentially indirect evidence of this elusive stellar population. It is expected that we will finally be able to directly observe Population III stars when the ​James Webb Space Telescope​ is launched.

How to Break Through a Wall in the Universe?

Weak on the Outside, Powerful on the Inside