Are we alone? Humanity has long sought the answer to this question, and modern scientific methods are bringing us closer to finding the answer. Astronomers and astrobiologists search for “biosignatures,” or signs of life, on planets beyond our solar system, and one particular category of interest is “technosignatures,” signs of technology not created by humans. Technosignature researchers generally prefer that more precise term now, but the field has long been referred to as the Search for Extraterrestrial Intelligence or SETI. Today’s classic paper “Searching for Interstellar Communications,” was the first modern publication in this field.

In 1959, Cocconi and Morrison published the first SETI paper and captured an important part of the SETI philosophy: “the probability of success is difficult to estimate; but if we never search, the chance of success is zero.” This work was actually inspired by the authors’ experiences in gamma ray astronomy. They recognized that gamma rays pass through the galaxy before they are detected on Earth and that extraterrestrial signals could do the same. In this paper, the authors propose that extraterrestrial beings may have interstellar communication networks then explore what this could look like.

In the work, they assert that electromagnetic waves are the only practical form of interstellar communication, then they explore what the optimal wavelength for these transmissions would be. In order to minimize signal absorption by Earth’s atmosphere as well as the required transmitter power, they decide on the 1 MHz – 10 GHz radio frequency band. For a more exact wavelength to search, they select the vicinity of the 21-centimeter (1.4 GHz) line, which results from an energy state transition in neutral hydrogen atoms. Due to this atom’s ubiquity throughout the galaxy, the line would likely be familiar to any extraterrestrial radio astronomers. They propose that small prime number sequences or simple mathematical sums in signals could be used to indicate artificial origins. The authors ultimately propose an initial search of sun-like stars within 15 light years, of which there are seven.

Project Ozma and the Drake Equation

Around the same time that this paper came out, Project Ozma was underway. Led by Frank Drake, this was the first modern search for signs of intelligent extraterrestrial life. He used the 85-foot Howard E. Tatel telescope (Figure 1) to examine two nearby Sun-like stars, Tau Ceti and Epsilon Eridani, near the 21 cm hydrogen line and found no candidate signals. 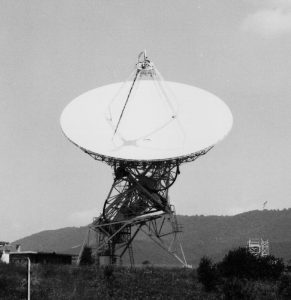 In addition to these searches, both Cocconi & Morrison and Drake also considered the question of how common intelligent life is in the galaxy. At the very beginning of Cocconi & Morrison’a paper, they note that answering this question is difficult because no reliable estimates existed at the time for the probabilities of planet formation, the origin of life, and the evolution of technological societies. Ultimately, Drake developed a more detailed description of this question, Drake Equation, which aims to estimate the number of active, communicative extraterrestrial civilizations in the Milky Way. The equation, created in 1961, is as follows:

Generally, these terms are still difficult to estimate accurately. The equation operates more as a way to think about the different aspects of the question of extraterrestrial life and to motivate experiments and observations than as a precise calculation.

Shortly after the Cocconi & Morrison publication, astronomers began exploring possible technosignatures beyond radio transmissions. In 1960, Freeman Dyson proposed the search for artificial stellar sources of infrared radiation. He proposed that technological civilizations grow in energy needs through time and pointed out that within a star system, the star is by far the largest energy source. Thus, a civilization harnessing a large amount of sunlight for some intelligent use (a structure now often called a Dyson sphere) would inevitably produce waste heat, likely in the infrared, that we could detect without the civilization specifically intending to reach out. Furthermore, in 1961, Schwartz & Townes, inspired by recent innovations, proposed the search for technosignatures in the form of optical lasers.

Where is SETI now?

SETI work has been continuous through the past 60 years, but funding and interest have wavered at times. SETI programs suffered from a “giggle factor” in many communities, including the United States Congress, based on its incorrect association with UFOs and “little green men.” In 1971, a NASA team created Project Cyclops, which was intended to be a massive federally-funded SETI search. However, cost prevented its implementation. In 1981, Congress ended their support for SETI. In 1982 NASA began SETI searches with the High Resolution Microwave Survey (HRMS), but the project’s funding was eliminated by Congress in 1993.

Due to a lack in federal funding, much of the field has been supported privately. Perhaps the most notable example is the Breakthrough Listen project based at the University of California Berkeley, which is part of  Israeli-Russian billionaire Yuri Milner’s Breakthrough Initiatives. The research team searches for radio technosignatures. Federal funding in the US, however, has recently made a comeback. In 2018, Congress renewed their interest in NASA expanding the search for technosignatures. As a result, NASA held a workshop to learn about the state of the field and what role they might play. In fact, in 2020, NASA awarded their first SETI-specific grant in three decades! 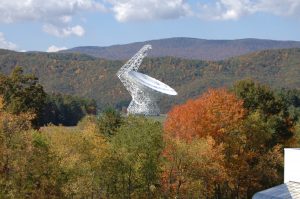 Figure 2: The 100-meter Green Bank Telescope at Green Bank Observatory, with which many of Breakthrough Listen’s observations are performed (image credit: NRAO/AUI/NSF)

SETI researchers have yet to find indisputable proof of extraterrestrial technology. However, methods have improved dramatically throughout the past 60 years. In light of so many non-detections, researchers have begun to set upper limits on how common certain technosignatures may be in the galaxy and in the universe. While many people feel discouraged by the lack of detections and claim that technological life beyond Earth may be rare or non-existent, SETI researchers claim that the search has only just begun.

As SETI Institute Emeritus Chair Jill Tarter stated in 2012, “the amount of searching that we’ve done in 50 years is equivalent to scooping one 8-ounce glass out of the Earth’s ocean, looking and seeing if you caught a fish.” In 2018, a team from Penn State actually calculated the fraction of the 9-dimensional “Cosmic Haystack” that had been searched and found that it is now closer to about a hot tub’s worth of water out of Earth’s oceans. The SETI community has lots of searching left to do to get through the whole haystack, but with recent growth in the field, including increased federal funding and university-based educational opportunities, we are headed in the right direction!

I am a fourth year graduate student at Penn State University studying Astronomy & Astrophysics. My current work focuses on technosignatures, also referred to as the Search for Extraterrestrial Intelligence (SETI). I am generally interested in exoplanet and exoplanet-adjacent research. In the past, I have performed research on planetary microlensing and low-mass star and brown dwarf formation.