Title: The First Dynamical Mass Measurement in the HR 8799 System

Astronomers have caught the first directly-imaged exoplanet gravitationally tugging at its host star – thereby revealing its own weight.

Figure 1: The HR8799 planetary system. Blocking out the light from the central star allows us to observe and track the motions of four of its exoplanets. The given scale of 20 A.U., a little more than the orbit of the first planet (Planet-e), is equal to the distance between the Sun and Uranus. Image: exoplanets.nasa.gov

Did you know that we can now click pictures of planets orbiting another star hundreds of light-years away? The HR8799 system is famous for being host to one of the first directly-imaged exoplanets. The four imaged planets are giants with masses greater than 5 times the mass of Jupiter (MJup) and wide orbits. They are named Planet e,d,c, and b in order of proximity to the star. In the 13 years since their first detection back in 2008 by the Keck and Gemini telescopes in Hawaii, astronomers have tracked the planets’ orbital motions around HR8799 with great precision. (Figure 1)

This has enabled the authors of today’s paper to calculate the mass of an exoplanet in this system using simple dynamics such as Newton’s and Kepler’s laws of motion. In particular, they concentrate on Planet-e, the one closest to HR8799.

Precision Astrometry as a Weighing scale

The measurement of Planet-e’s mass rides on the fact that the motion of the four planets produces minute tugs on the HR8799 star, thereby changing its position in the sky ever so slightly. Extremely precise measurements of a star’s sky coordinates is known as astrometry, a tool that has become especially prominent in recent years with new sky surveys like Gaia complimenting their predecessor Hipparcos. The researchers used data from Gaia’s latest data release (DR3) to track the acceleration of the HR8799 star, caused by the net gravitational forces due to all four planets.

Knowing accurately the masses of all four major planets makes it possible to predict how much they can accelerate HR8799. In turn, precise observations of the star’s acceleration enabled the researchers to reverse this calculation and infer the exoplanet masses. 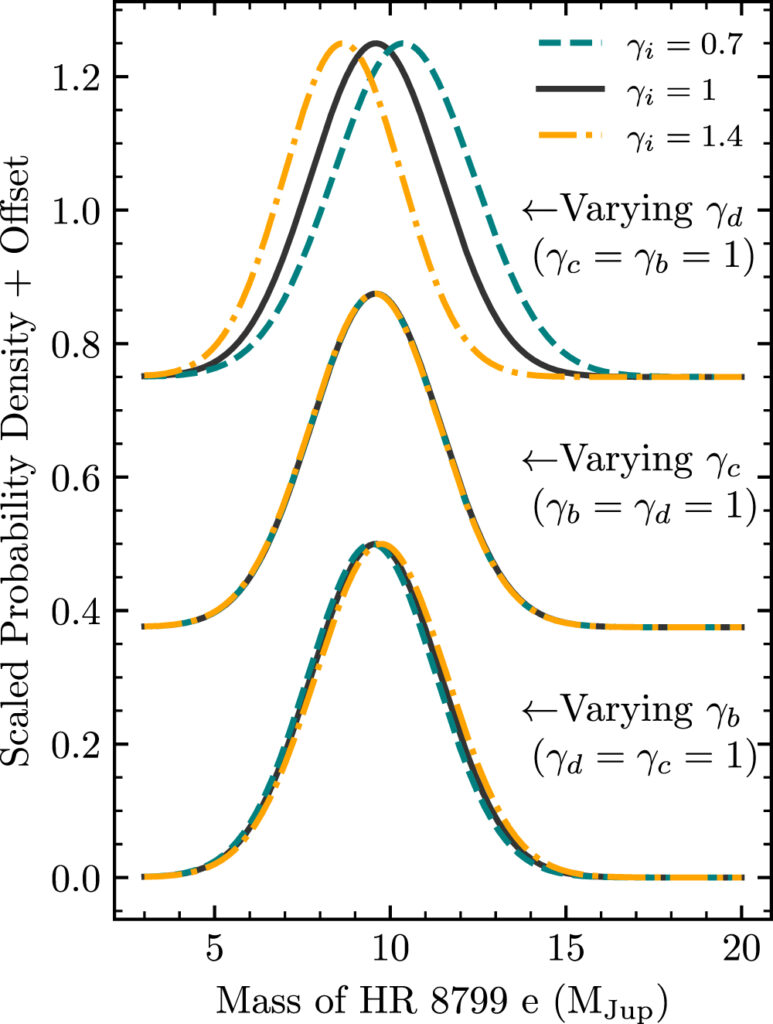 Figure 2: The inferred probability distribution of the mass of Planet-e, based on varying the assumed mass ratios of other planets with respect to it (top: Planet-d, middle: Planet-c, bottom: Planet-b). The top panel shows that Planet-e’s mass estimation is most sensitive to the second-closest planet, Planet-d, being heavier (yellow curve) or lighter (blue curve). It does not depend much on the relative weights of the farther two planets. Figure 1 from the paper.

Planet-e, being closest, plays the principal role in shaking up its host star. However, the contributions made by other planets are needed to determine how prominent planet-e’s tugs are, and in turn how heavy it can be. Without knowledge of any of the planets’ masses, it is necessary to make assumptions about how much they weigh relative to each other. Figure 2 shows the probability distribution of planet-e’s mass by assuming different mass ratios of it and each planet.

The authors determine the resulting mass of Planet-e to be 9.6 times that of Jupiter, within an error bound of 2 MJup. They can say with a 95% certainty that its mass is below 13 MJup,beyond which it can have enough pressure at its core to start fusing deuterium and trigger nuclear fusion to become a (proto)-star by its own!

Implications for the Stellar System

In spite of being the planet closest to HR8799 in the image, planet-e is still three times farther away than Jupiter is from the Sun. Are there any smaller planets in the HR8799 system, closer to planet-e but small enough to escape detection via direct imaging? 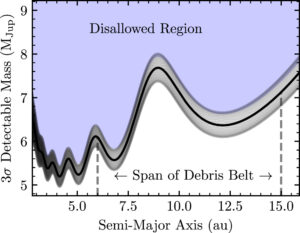 Figure 3: Can a hypothetical planet with a certain mass (y-axis) exist within the 16 A.U. distance (x-axis) between HR8799 and the orbit of Planet-e? The purple region represents heavier masses which are disallowed since their effect cannot be seen in observations. Figure 3 from the paper.

A hypothetical interior planet can additionally perturb the astrometric motion of HR8799. But with the lack of such observed perturbations, the authors discard the presence of any planet weighing more than 6 MJup within 8 A.U. (a little under the Sun-Saturn distance), and any additional planets weighing greater than 7 MJup between a distance of 8 A.U. and Planet-e’s orbit (Figure 3).

This study is a marker for how far we have come in studying exoplanets. It is a fine example of applying simple dynamics to study the gravitational dance and motions of an exoplanetary system – techniques which until recent times could only be applied to study our own Solar System.

How Do You Find the Surface of an Exoplanet? Ask its Atmosphere!