NGC 5466 and Its Stellar Stream

Title: Uncovering fossils of the distant Milky Way with UNIONS: NGC 5466 and its stellar stream

Stellar streams fascinate me. On the galactic scale, they are the closest thing to perfect order and unity. Whenever I see a stellar stream, I picture a progenitor star cluster or dwarf galaxy orbiting the Milky Way and gracefully stretching along its path. The stars, unbound from their previous host and captured by the Milky Way, form a string like pearls on a necklace. The fewer random motions they started out with (e.g. if they came from a globular cluster), the thinner the stream. Stellar streams are as beautiful as they are fragile. The pearls on this necklace are not held together by any physical forces other than their coherent motion. The motion of these stars is governed by the combined gravity of the Milky Way and its progenitor, and any close encounters with massive objects can send stars flying off and create a gap in the stream. Thinner streams are more sensitive to these perturbations, making them the ideal tracer of the galactic potential and any substructures within. 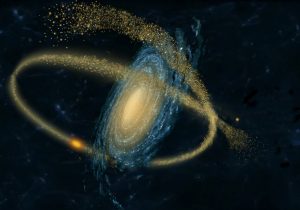 Figure 1. An illustration of a stellar stream, the remnant of a satellite galaxy, wrapped around a larger galaxy like the Milky Way. (Source: Jon Lomberg.)

Observational astronomers have found many stellar streams using the Gaia space telescope, which provides accurate distances and proper motions to Milky Way stars. Recent notable efforts include the StreamFinder algorithm by Rodrigo Ibata (see this paper). The authors of today’s paper take us on a journey to find individual stars in a stellar stream that is associated with the Milky Way globular cluster, NGC 5466. In particular, they use Blue Horizontal Branch (BHB) stars and Red Giant Branch (RGB) stars to find possible streams in the Milky Way halo. Both BHB and RGB stars have evolved off of the main-sequence, are burning Hydrogen in their shells, and are bright enough to see at large distances like in the halo. The difference is that BHB stars are massive enough to ignite Helium burning in the core. Since the intrinsic brightness of BHB stars is known, they can also serve as a distance indicator for the stream they reside in. RGB stars are less massive and thus more numerous, which means they can better trace the overall extent of a stream.

The authors use u-band data from the Ultraviolet Near-Infrared Optical Northern Survey (UNIONS). From this survey, around 10,200 BHB stars have been catalogued. The RGB classification comes from machine-learning applied to stars with Gaia observations. In the sample, there are 103,000 RGB stars with positions, proper motions, distances, and metallicities. Given the positions of all the BHB stars, the authors ran a spatial clustering algorithm called OPTICS to identify stars that are close together. Using this algorithm, they successfully recovered previously known globular clusters and a dwarf galaxy based on the over-density of BHB stars. 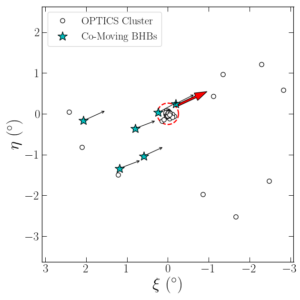 Figure 2: Blue Horizontal Branch stars that are identified as part of the NGC 5466 group by OPTICS algorithm. The red arrow represents the proper motion of the cluster, and the black arrows show the proper motions of individual stars. The red dashed circle shows the tidal radius of NGC 5466. Reproduced from Fig. 3 of the paper.

Fig 2 shows the OPTICS grouping for NGC 5466. NGC 5466 is a globular cluster at 16 kpc from the galactic center, where previous photometry has suggested a stellar stream might exist. The authors found that six of the BHB stars were identified to be cluster members and are moving with the cluster, but they are outside the tidal radius of NGC 5466. That means they are no longer bound to the cluster, but they may have originated there. Could this indicate the presence of a stellar stream? Six stars are still too few to say for sure, so they next looked at RGB stars.

Tracing the stream with RGB stars 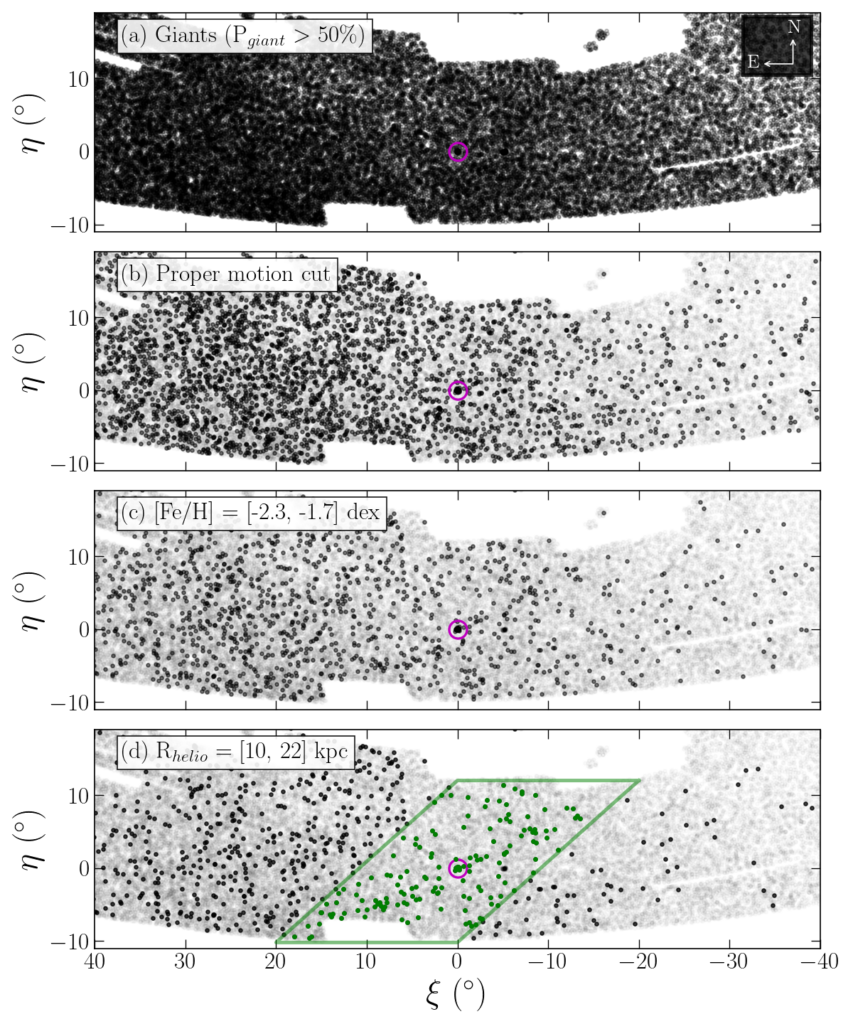 Figure 3. Red Giant Branch stars centered on NGC 5466 (magenta circle). The x and y axis represent the tangential plane. Panel a): all giants with probability > 50%. Panel b): Grey points are the full sample in a), while black points are the stars with proper motion, similar to NGC 5466. c): stars from b) that pass an additional restriction of metallicity. d) stars from c) that remain after filtering for distance. Reproduced from Fig 5 of the paper.

The authors make a series of cuts from the RGB catalog as shown in Fig 3. First, they selected all stars that are more likely to be RGB stars than main-sequence stars (a). Then, they make cuts around the proper motion and metallicity of NGC 5466, reducing the number of RGB stars that pass the cut in panels (b) and (c). Finally, they only select stars that are between 10 and 22 kpc from the Sun, based on the distance to NGC 5466 (16 kpc). The final sample in panel (d) shows a possible stream highlighted by the green points. To further refine the selection, the authors iteratively fit the proper motion of the selected stars and remove 3-sigma outliers. The result is what they call the “gold sample”, shown in Fig 4. 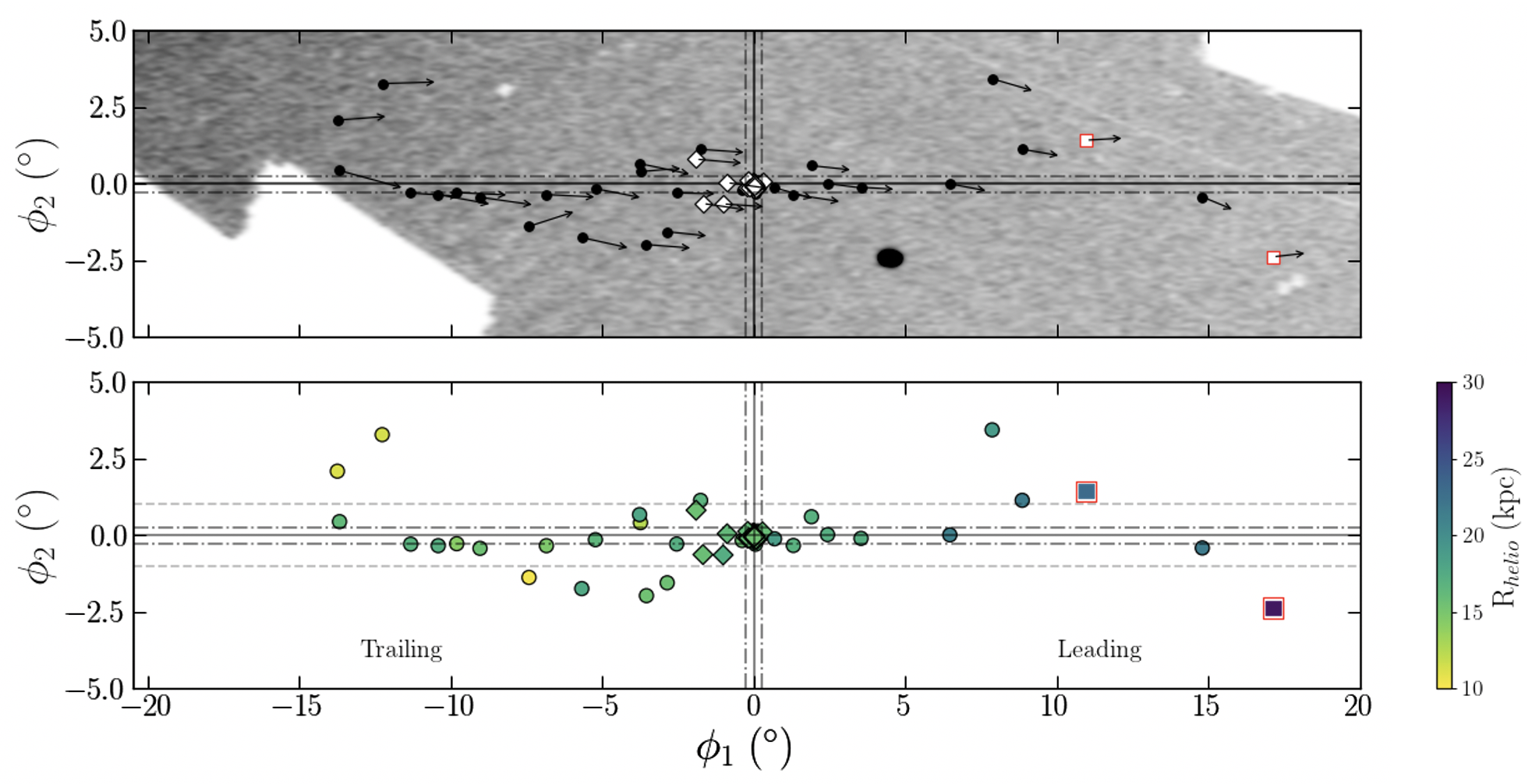 Figure 4. Gold sample Red Giant Branch stars (circles) and Blue Horizontal Branch stars (diamonds) in the stream coordinate system. Vectors in the top panel are the proper motions. We show the limits of the survey footprint as the grey-filled region. Colors of stars in the bottom panel correspond to their heliocentric distances. Most of the stars identified are within 1 degree of the φ2 plane, shown as the dashed lines in the bottom panel. Dashed-dotted lines signify the tidal radius. Reproduction of Fig 7 in the paper.

Based on this sample, they fit a great circle through the positions of all the stars and use this new coordinate system to define φ1 (angle along the stream) and φ2 (angle perpendicular to stream). They found that most of the members are within 1 degree of the stream track. In addition, we can see by eye that there is a gradient in the distance. This certainly looks like a real stream!

If you recall my metaphor of pearls on a string, the stars in this stream should roughly be positioned along the orbit of the progenitor. In this case, the position and velocity of NGC 5466 is well-known. The authors can choose a model for the Milky Way gravitational potential and integrate the orbit of NGC 5466 back in time to see where it came from. Then, they can integrate it forward in time and release star particles from the cluster, to model what its stellar stream would look like. Even though they used a simple model, the result is a good match to the data. That gives us confidence that the detected stream of stars really could have come from the globular cluster. 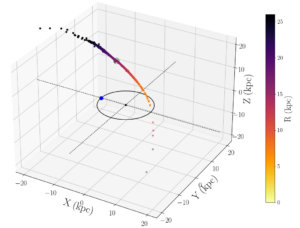 Figure 5. Orbit integrations of NGC 5466 in the Galactic frame. The colored points show a 3D representation of the particles in the stream, where the scaled colors correspond to Galactocentric radius (R). We also show the Solar circle where the Sun is located at the blue point. Reproduced from Fig 9 of the paper.

The authors of today’s paper discovered and characterized the stellar stream associated with NGC 5466. Few streams are known at large (> 10 kpc) distances, which makes this new stream a valuable addition. In the future, spectroscopic follow-up can give us radial velocities of the identified stream stars and the full spatial and 3D velocity information allows us to track their orbits. Then, we will be able to find possible perturbations that it experienced and learn more about our Milky Way galaxy.