Shouldn’t we be orbiting a red dwarf?

Title: Formulation and Resolutions of the Red Sky Paradox

How unique are we?

Given the 100 billion or so stars in our galaxy and the incredibly old age of many such systems, you might expect that intelligent life, if it exists, would have had plenty of opportunity to spread itself across the universe in ways that should be obvious to humankind — thus, the Fermi Paradox asks, where is everyone? A similar paradox can be considered regarding the types of stars that seem to host life. Our sun is part of a group of stellar types referred to as FGK-dwarfs, but the vast majority of stars (~¾) are instead red dwarfs (i.e., M-dwarfs), which are smaller, cooler, and dimmer. Assuming intelligent life can occur around all kinds of stars in the universe, then the greater number of M-dwarfs suggests it is somewhat unusual that we look up and instead find ourselves orbiting a G-dwarf. Alternatively, perhaps our situation suggests that there is something about these common M-dwarf systems that prohibits life, and FGK-dwarfs are the place to be. The author of today’s paper considers arguments on either side of this problem, dubbed the Red Sky Paradox, using Bayesian statistical analysis to discuss four possible resolutions.

The author of this work aims to improve on the somewhat problematic framing of previous studies, which computed probabilities without considering the variable abundance of planets and habitability around different star types. The author investigates probabilities by developing a formula in which biology develops at a uniform rate that leads directly from non-living chemical processes to eventual intelligent life. This rate is included alongside a time window for life to develop (based on the length of the host star’s life cycle) in order to find the probability of life emerging around an FGK-dwarf versus the more common M-dwarf. These equations are then used to compute the probability of life in various scenarios. There are of course many other types of stars and subtypes, but treating the issue as having just two solutions — a lifeform either develops around an FGK- or an M-dwarf — seems to be a reasonable and helpful simplification. 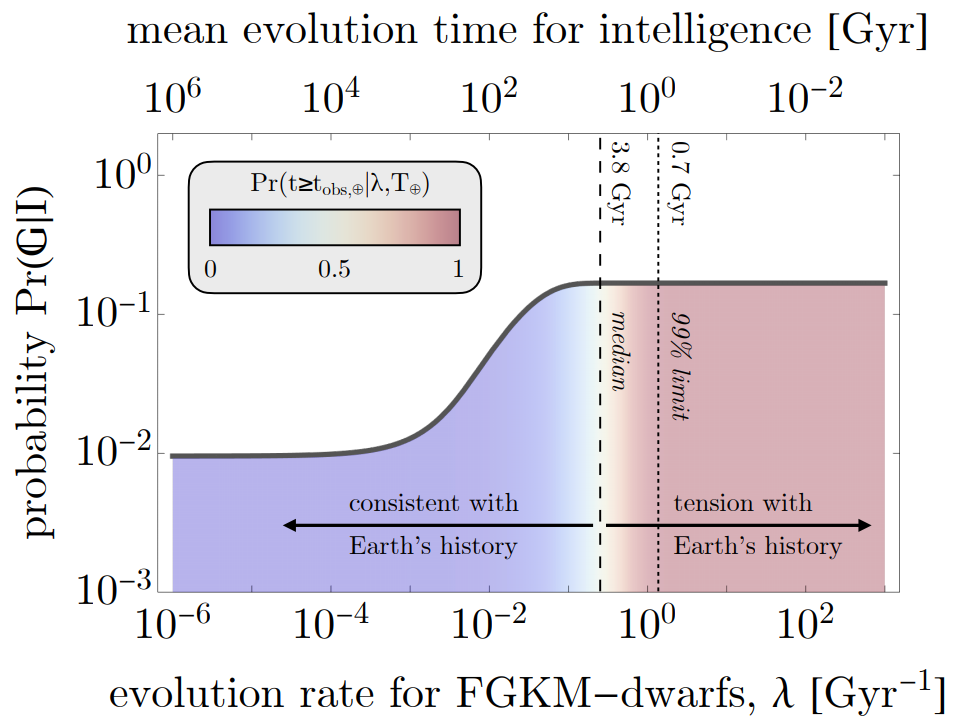 Figure 1: Plot of Resolution I with probability of humanity developing around an FGK-dwarf over the necessary rate for intelligent life to spawn for such stars. The probability may fall between 1% and 10% (10-2 and 10-1 on the y-axis), though the former seems more consistent with the slow development of intelligent life that occurred on Earth, as shown by the bluer colors. Figure 1 in today’s paper.

The authors make note of a few caveats for each outcome. For Resolution I (see Figure 1), a fast emergence/evolution of life would lead to us being less of an outlier (1-in-10) and resolve the Red Sky Paradox, but should result in a universe teeming with intelligent life and so seems at odds with the apparent Fermi Paradox. A slower emergence rate is more consistent with the billions of years it took intelligent life to develop on Earth, but with the 1-in-100 outlier outcome seems to go against the Copernican Principle that we are not special but just a tiny drop in a vast sea.

Alternatively, Resolution II has good theoretical support due to existing concerns about less-than-habitable conditions that may arise around m-dwarfs (e.g., frequent tidal locking, high stellar activity, etc.). Resolution III has similarly good support since the pre-main sequence for m-dwarfs seems to be at least several times less than the main sequence lifetime of FGK-stars, giving a smaller time window for life to develop. Resolution IV could also be relevant, as the occurrence rates of Earth-sized worlds around different star types are hotly debated, not to mention that Earth-sized doesn’t necessarily mean habitable and doesn’t include other bodies of interest like exomoons.

Of course, these options are not mutually exclusive and a combination of them could be responsible. Fortunately, observational astronomy may be able to test some of these possibilities in the near future. For example, frequently finding runaway greenhouse worlds around m-dwarfs would support Resolution III, whereas a paucity of Earth-like planets around late m-dwarfs would support Resolution IV. Ultimately, this sort of probability study, in combination with incoming results, can help us to best direct future observations (e.g., using JWST) with the highest chance of finding evidence of life in the universe.

For more details on this work (from the author himself!) check out the excellent summary video below: