Peering through the lens of the Milky Way Supermassive Black Hole

Title: Stars Lensed by the Supermassive Black Hole in the Center of the Milky Way: Predictions for ELT, TMT, GMT, and JWST

Our Milky Way Galaxy is known to host a Supermassive Black Hole (SMBH) at its center. First detected as a strong radio source called Sagittarius A*, we have not seen it directly through optical telescopes. However, it made its presence known at the turn of the millennium, when astronomers caught its immense gravitational pull whirling around a number of stars in the galactic core in slingshot orbits. Known as ‘S stars’, their motion implied a central mass weighing a whopping four million times the mass of the Sun concentrated within a sphere of radius equivalent to the Earth-Sun distance. Such a concentration of mass means it can only be a black hole – this observation by Andrea Ghez and Reinhard Genzel was awarded the 2020 Nobel Prize in Physics.

The coming decades will see the next generation of optical telescopes pushing our frontiers of observational astronomy. These include the successor to the Hubble Space Telescope: the James Webb Space Telescope (JWST), due for launch at the end of 2021, and other planned ground-based telescopes such as the Thirty-Meter Telescope (TMT), the Giant Magellan Telescope (GMT), and the Extremely Large Telescope (ELT). Being an object that emits no light smaller than our solar system, at about 26 thousand light years away, and surrounded by an immensely dense core of stars, the SMBH is still impossible to optically detect. But the authors of today’s paper say detecting it with these telescopes would be elementary – through the lens of our SMBH’s gravity!

Gravitational Lensing is caused by dense, massive clumps of matter (the gravitational lens) distorts a distant light source either by magnifying and extending it into rings (known as Einstein rings), or by generating multiple copies of it. Observations of this phenomenon commonly involve a large lens, such as a galaxy cluster, lensing an extended object like a distant galaxy. Very few observations have been made of point-like stars being gravitationally lensed. This is where Sag A*: the Milky Way SMBH, comes into picture.

Figure 1: An illustration of the image of a star behind a black hole getting split into two as seen by a telescope on the other side. Image credit: NASA Roman Space Telescope

The light coming from stars directly behind the Milky Way SMBH can get lensed as it makes its way to Earth. This causes the resulting image to split as illustrated in Figure 1, giving rise to a secondary image of the same star, diametrically opposite with respect to the location of Sag A*. This splitting (or the Einstein radius) is greatest for light coming from directly behind the SMBH along its axis, and becomes tinier for stars away from this axis. To detect these secondary images, a telescope must have high sensitivity (being able to see faint sources), and high resolution (being able to differentiate between two very close sources). The most important characteristic of the next generation of telescopes is going to be their enhanced sensitivity to stars that are dimmer than the 24th magnitude. The magnitude scale is flipped, with lower numbers indicating brighter stars, and each increment making a star 2.5 times dimmer. For reference, the human eye can only see stars upto the 6th magnitude in perfect conditions.

Prospects for Next-Generation Giant Eyes to the Skies

Knowing the sensitivity and resolution of each of the next-generation telescopes enabled the researchers to estimate the number of lensed stars they can detect. This is shown in Figure 2. Given a certain variation in the density of stars behind the SMBH until the end of the galaxy, they calculated how many can be bright enough for their split lensed image to be both visible and well-separated in images for each telescope taken over 5 hours. The authors found that the ELT, GMT and TMT will each be able to resolve over a 100 such lensed star images, followed by the JWST. The latter will largely be limited by confusion, where a different star from the dense galactic core is mistaken to be the lensed image of another star. Most lensing detections will come from stars within 5 kpc, or 16 thousand light years behind Sag A*. 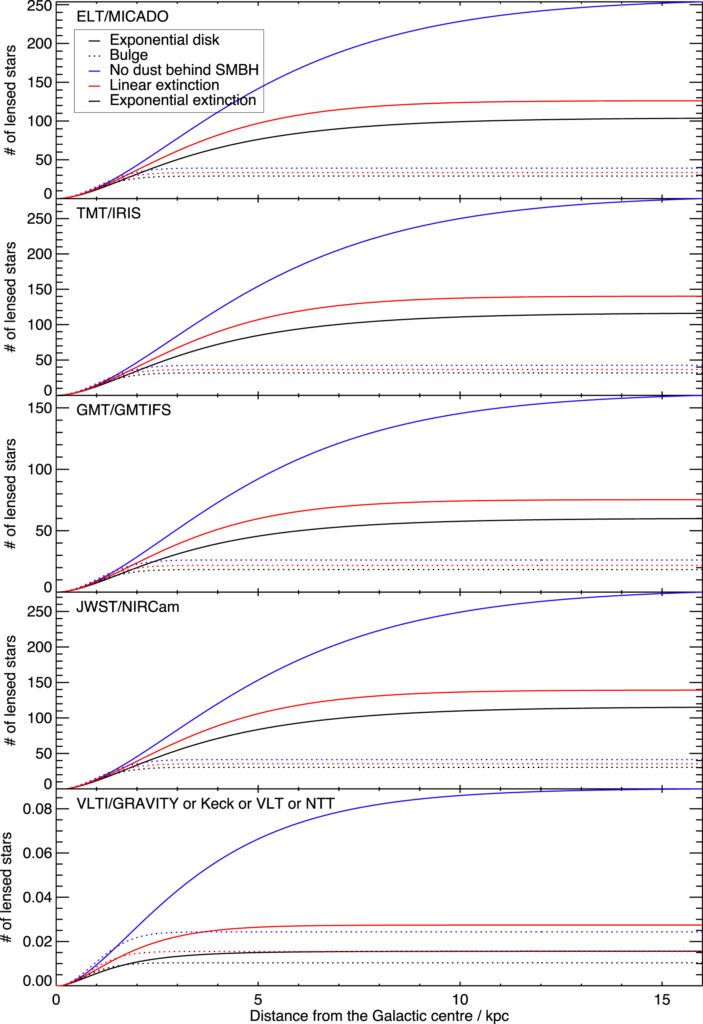 Figure 2: The cumulative number of lensed stars detectable by various next-generation optical telescopes is plotted here against increasing distance (in kpc) behind the SMBH at the center at 0 kpc. The X-axis scale is set by the radius of the Milky Way, around 15 kpc. Figure 1 in the paper.

The observation of lensed background stars has the great implication of providing us with another way of studying our neighbourhood SMBH. But there’s more! Not only is this a lensing observation of point-like stars, but in this case, the gravitational lens itself is point-like. This is because Sag A* is relatively small given its 26 thousand light-year distance away from us. This places it apart from previous gravitational lensing observations where the lenses comprised large-scale structures like galaxies and galaxy clusters. Mathematically, the configuration of a point-like source and point-like lens gives the clearest and most complete description of gravitational lensing through Einstein’s theory of general relativity. As such, we can use observations of this phenomenon to put Einstein’s theory itself under the test! A century since its inception, general relativity has withstood tests from planetary and spacecraft orbits, binary pulsars, X-ray observations, gravitational waves, and other forms of gravitational lensing. Will it be able to hide behind a Supermassive Black Hole?