The Search for a Ninth Planet in the Solar System (No, it’s still not Pluto, sorry.)

Title: The Orbit of Planet Nine

Status: Accepted for publication in the Astronomical Journal

Wait, hasn’t there been a ninth planet before?

In 1906, the Solar System was known to have eight planets (as it is now): Mercury, Venus, Earth, Mars, Jupiter, Saturn, Uranus, and Neptune. At the time, Uranus’s orbit seemed to show unexpected irregularities, and Percival Lowell began the search for a planet he named “Planet X,” which could cause these gravitational perturbations. In 1930, Pluto was discovered and officially named the ninth planet. However, in 1978, Pluto was determined to be too low in mass to have caused these perturbations, so the possibility of a tenth planet was proposed. In the 1990s, however, it was discovered that Neptune is less massive than astronomers thought, which explained the apparent discrepancies in Uranus’ orbit. At this point the search for an additional planet was largely abandoned.

When I was a kid, we still had a “ninth planet,” Pluto. In 2006, the International Astronomical Union (IAU) created an official definition for solar system objects to be considered planets. This definition excluded Pluto because it hasn’t “cleared the neighborhood around its orbit,” meaning that its mass is substantially less than the total mass of other objects in its orbit. So, our Solar system is back to 8 planets currently. However, in the 21st century, new discoveries have once again revealed orbital irregularities which may be explained by an additional planet in the outer Solar System, referred to as Planet Nine or P9.

The Case for Planet Nine

In the early 21st century, a population of distant, eccentric Kuiper belt objects (KBOs) was discovered.  These KBOs are not gravitationally influenced by Neptune, suggesting the presence of an additional gravitational perturber. These objects appear to be clustered in longitude of perihelion and in the orbital plane. This means that their orbital axes are nearly aligned, as well as their angular momentum vectors. The Planet Nine hypothesis was first proposed by the authors of today’s papers, Batygin & Brown, in 2016. It posits that an additional giant planet beyond Neptune, on an inclined eccentric orbit, is the cause of this KBO clustering. 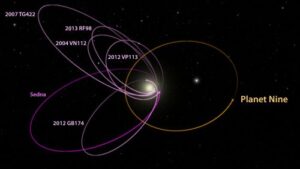 A point of controversy in the case for Planet Nine is whether this orbital clustering is statistically significant or if it could be the result of observational bias. In today’s paper, the authors calculate that the clustering is significant at a confidence level of 99.6%. This means that there is only a 0.4% chance that their data set would be detected given a random sample. A giant planet on an inclined or eccentric orbit is the simplest explanation for this observed clustering.

The authors performed a series of 121 simulations using a variety of possible P9 parameters to calculate the likelihood that the observed KBO distribution could be caused by different P9 masses and orbits. They found that P9 should have a mass of 6.2+2.2-1.3 Earth masses. Its semimajor axis and perihelion (sun-planet distance at closest approach) are estimated at 380+140-80 AU and 300+85-60 AU, respectively. Its orbit should be inclined roughly 16±5 degrees from Earth’s orbital plane.

The results of the simulations do not depend on where the planet currently is in its orbit, so we must consider its entire orbital path as possible locations. The authors calculate the probabilities of possible locations and magnitudes for P9, as shown in Figure 2 below. For the magnitude calculations, they must infer the planet’s size and albedo (fraction of light reflected). Given the planet’s estimated mass of roughly 6.2 MEarth, its composition is likely that of a sub-Neptune: a core made of ice and rock, surrounded by a hydrogen- and helium-rich envelope. Based on measured mass-radius relationships among exoplanets, the authors adopt a relationship of RP9 = (MP9/3MEarth) * REarth to estimate the planet’s radius. They explore the full range of possible albedos for a planet of this type, from 0.2 to 0.75. 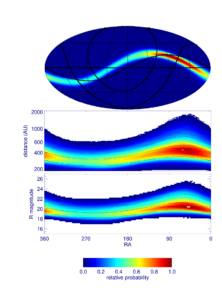 Figure 2: Relative probabilities of Planet Nine’s location on the plane of the sky (top), in distance from the sun (middle), and R-band (red) magnitude. (Figure 9 in the paper)

At the brightest possible values, Planet Nine would be detectable with multiple current sky surveys. Since it hasn’t yet been detected, the planet is likely not this bright. For most of the possible brightness range, the planet would be detectable by a telescope like the upcoming LSST telescope at the Rubin Observatory. For the dimmer end of the distribution, 10-meter or larger telescopes would be required for detection.

While the existence of a Planet Nine is still controversial, the statistical significance of KBO clustering remains, for which P9 would be the simplest explanation. The continued search for such a planet will strengthen our understanding of the outer Solar system and, if successful, allow for the detailed study of a sub-Neptune mass planet, a size very common among known exoplanets!