Observations have revealed that present day galaxies come in a vast range of shapes, sizes, and colours. At the faintest end of the spectrum, there exists a population of low-surface brightness galaxies referred to as ‘Ultra-diffuse Galaxies’ (UDGs). UDGs are also outliers in terms of their size — the mass-size relation of galaxies is fairly tightly-correlated, however, UDGs are much larger in size than would be expected for an average galaxy of their mass. UDGs have a stellar mass content typical of dwarf galaxies (M* < 109 M☉), but their sizes are more comparable to that of the Milky Way (effective radii of ~ 3 kpc). Understanding how these extended galaxies form is an extremely active area of research in galaxy formation.

Until recently, observations indicated a dichotomy in the UDG population. In dense galaxy environments, such as galaxy groups and clusters, UDGs were shown to be red in colour and quiescent. A quiescent (or quenched) galaxy is essentially a dead galaxy that is no longer forming stars (see this bite for more information on the processes that can cause a galaxy to become quiescent). On the other hand, UDGs observed in the field (in isolation) were shown to be blue and star-forming. These observations indicated that the difference in star formation activity of these galaxies was purely down to the difference in the environment they inhabit. However, recent observational detections of quiescent, dead UDGs in isolation has challenged this idea. The authors of today’s paper use the IllustrisTNG cosmological simulations to investigate the origin of these quiescent, isolated UDGs.

A Galaxy’s Hidden Past

The idea behind today’s paper is to test whether UDGs that are observed in isolated, low-density regions of the Universe could have undergone complex interactions in dense environments in the past, and whether these interactions can lead to a UDG being quiescent by the present day. Of particular interest to today’s authors are ‘backsplash’ galaxies — galaxies that have previously crossed the boundary of a larger, host dark matter halo (the boundary is denoted r200 in the paper; a proxy for the virial radius), have then undergone at least one pericentric passage, and are now found well beyond the boundary of the host dark matter halo.

The authors first identify the simulated UDGs by selecting the most extended 5% of galaxies within a mass range of 107.5-109.5 M☉ (see Figure 1 for this selection). Figure 1 also shows a comparison with the properties of observed UDGs, and highlights that their simulated sample agrees well with observed properties. Once the UGDs are identified, the authors go on to investigate the past trajectories of UDGs that are both isolated and quiescent at the present day. 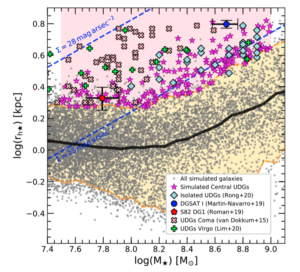 Figure 1: The grey points indicate the stellar size (rh*) and stellar mass (M*) of the galaxies in the simulation. Simulated UDGs (pink stars) are selected as being the largest 5% in terms of their stellar size. Various observed UDGs are also shown for comparison. Blue dashed lines show lines of constant surface brightness. Figure 1 in paper.

Tracking UDGs Back In Time

Figure 2 shows an example orbit for one of these UDGs, and highlights the main finding of the paper — the quiescent, isolated sub-population of UDGs can be explained by backsplash orbits! As can be seen in panel a) of Figure 2, the (g-r) colour of the UDG (an indicator for star formation activity, with higher (g-r) values indicating a quiescent galaxy) changes significantly over the orbit of the galaxy. In this plot, r200 refers to the boundary of the larger group system, and is shown by the black line. The UDG begins its life blue and star-forming, and quickly becomes quiescent after its pericentric passage near the group’s centre. By the present day, it is found at a large distance from the centre of the group it has previously interacted with. Panel b) of Figure 2 shows the stellar (red) and gas (blue) content of the UDG at different snapshots in time. Again, it can be seen that the gas is almost entirely removed between t=9.84 Gyr and t=10.3 Gyr, indicative of a rapid quenching process due to the UDGs close encounter with the centre of the larger group. 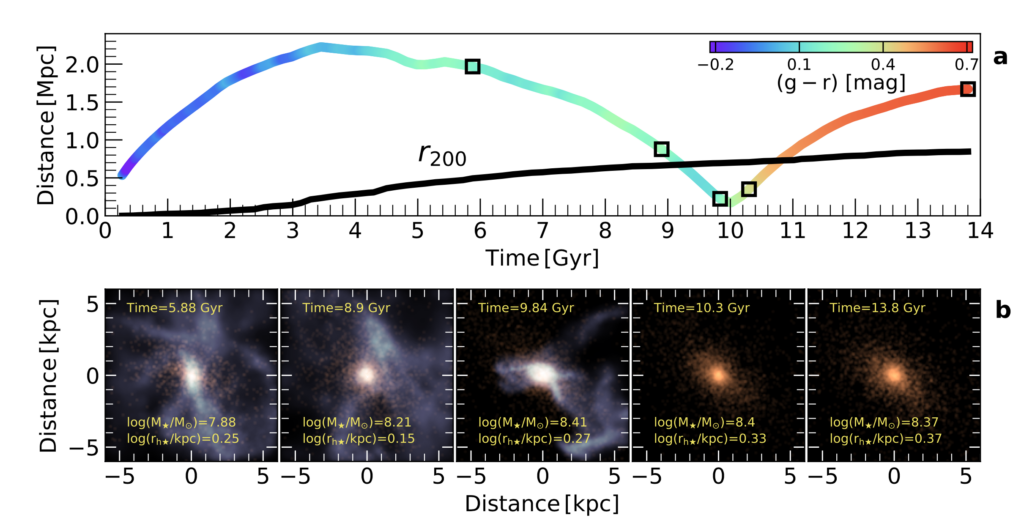 Figure 2. Panel a) shows an example orbit of a quiescent UDG around a group-sized halo. The boundary of the group-sized halo is indicated by the black line marked with r200. The colour bar of the UDGs orbit refers to the galaxy (g-r) colour and shows that the UDG is quenched shortly after pericentric passage of the group (at ~10 Gyr). Panel b) shows snapshots of the UDG with its stellar content shown in red, and gaseous content shown in blue. The time of the snapshot is also indicated by the black squares in panel a). Adapted from Figure 3 in the paper.

The authors also note the interesting point that the sizes of their UDGs do not significantly change over time, meaning that their UDGs were already extended before any interaction with a dense environment — so past interactions can only explain why a UDG is quiescent, not the UDG formation itself. The authors go on to propose that the reason for extended sizes of their UDGs might be linked to the initial angular momentum of the dark matter halo that the UDGs form and evolve in. While their analysis supports this view, the authors note that other work with simulations favour different mechanisms for UDG formation. Further detailed studies are in the works to investigate the origin of UDGs in the Illustris simulations — keep an eye out for more on this topic!