From star parties to observatories: an astronomer’s journey

I will never forget the first time I observed alone on a telescope. Weather was clear and the targets were high in the sky, and there was not a single minute to waste. I was a sophomore in college left responsible for operating a multi-million dollar telescope, and the scientists who sent me there were probably expecting to analyze the data that I would gather that night. It was past midnight in the control room, but I was wide awake, heart racing with stress. Time to move on to the next target. I grabbed my flashlight and pushed open the door to the dome floor. While pressing down a button that moves the telescope, I watched moonlight stream through the dome opening and flow onto the dome floor. The rotating telescope emanated a soft white glow, as if it was the centerpiece on stage chased by a spotlight. Moonlight washed away all my anxiety and left me gazing up in awe, but I could not describe how I felt in that moment until I watched La La Land months later. Emma Stone and Ryan Gosling danced inside the Griffith observatory, and somehow their magically levitating waltz perfectly captured the joy I felt.

Research observing trips were nothing like I imagined. When I began studying astronomy, I had only seen telescopes at star parties. I thought I would get to spend lots of time looking at the night sky, but as you can read about in these two astrobites, astronomers on an observing run mostly rely on computers to collect and analyze their data. Most of the night, we sit in the control room facing an array of screens and occasionally step into the dome to push buttons that move the telescope. Despite this surprise, but maybe precisely because of it, I was hooked. 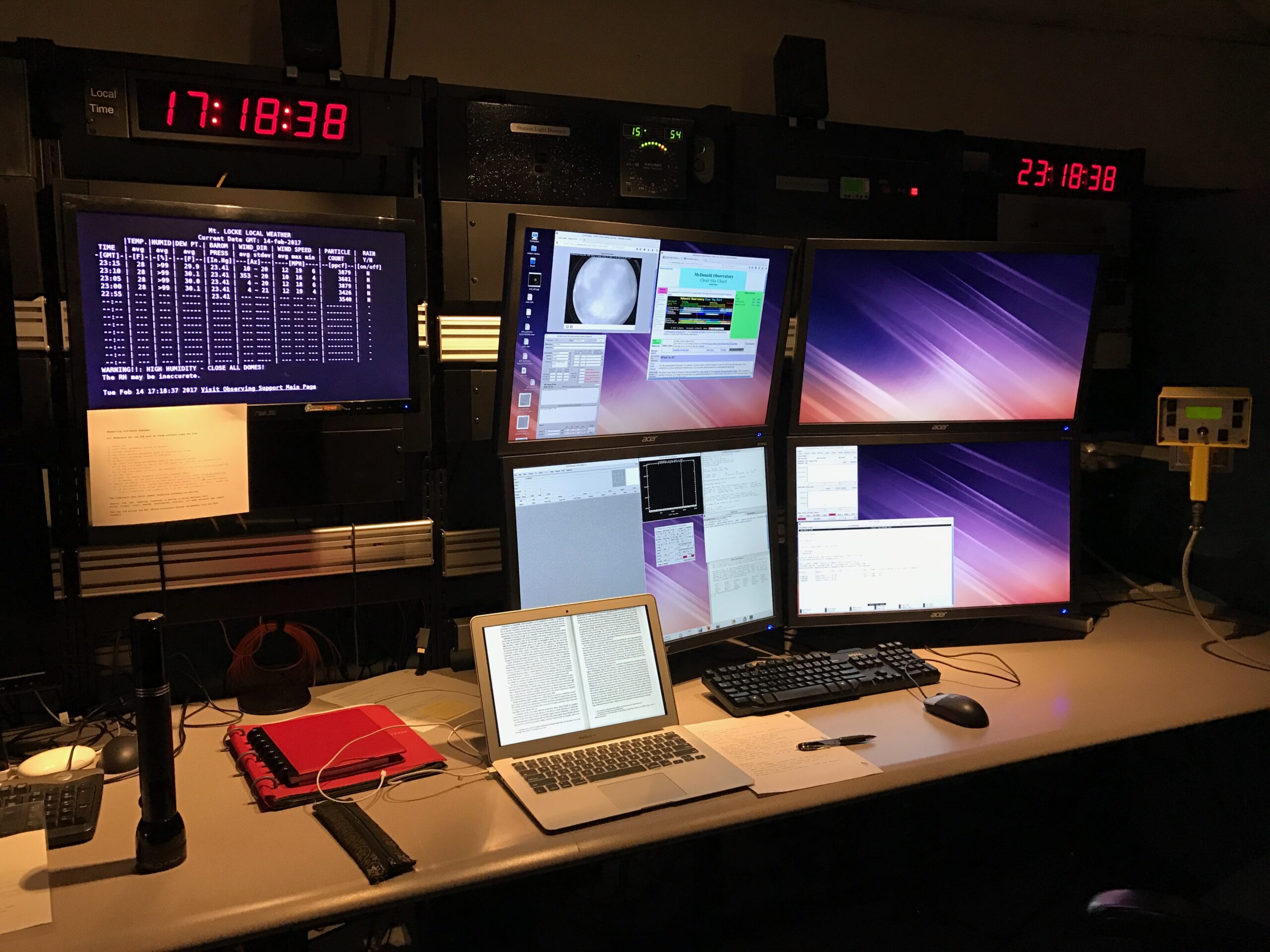 Observing setup from my first solo trip to McDonald Observatory in west Texas.

I liked observing because I was thrilled to walk into a whole new world inside the telescope dome, intricately designed for observing. On my first observing trip, I received a crash course while my mentor literally walked me through the telescope and dome. I remember being amazed to learn that the telescope was directly mounted to the foundation for stability, while the five-story tall dome was built around it. More excitingly, I got to use all that equipment for our science project. At our telescope, the observer was responsible for controlling everything from the telescope to the camera detectors. For example, I filled the liquid nitrogen dewar that chills the detector to the desired -150F. If I wanted to focus the telescope, then I would point the telescope to a star, go downstairs to look at it by eye, and try to minimize its size while toggling a hand paddle that controlled the focus value. Through the eyepiece, the star sparkles like a diamond but has strange rippling spikes. Due to atmospheric seeing, the star dances around and never settles. When I took out the eyepiece, the light would then go through the spectrograph and be recorded by our detector. Whenever new data showed up on my computer screen, those are photons from distant stars and galaxies carefully collected by the whole telescope.

Life at the observatory follows its own curious rhythm. An observer’s workday starts around sunset and ends around sunrise, which is exactly the reverse of our natural circadian rhythm. To maintain this delicate inversion, observatory lodges are equipped with thick carpets, blackout curtains, and strict quiet hours. Observatory staff cook and serve dinners, and pack a neat plate of night lunch for the observers to bring to the telescope. In all the observatories I went to, the staff were exceptionally kind and I loved the quirkiness of observing life. The daily rituals and the remote location of observatory lodges is somewhat reminiscent of monasteries, which happens to be the nickname of the lodge at a real observatory (Palomar). Also similar to a monastery, observatories only allowed men to use the telescopes until the mid-1960s. Historically, the observer on the biggest telescope was supposed to sit at the head of the dinner table. I went there to observe in my first year of grad school, but as a non-white foreign woman, I would not have had a place at their dinner table hierarchy eighty years ago.

Photons arriving at the telescope have travelled far and long, and in some ways, so have I. Since my first observing trip in college, I have never doubted that astronomy research was my passion. Now that I am halfway through a Ph.D. in astronomy, I still see observing as a rare and exciting privilege to learn about the cosmos. Along the way, I got to use some of the world’s largest optical telescopes. The 10-meter mirror on the Keck II telescope is collecting photons from my target galaxy as I type these words. The weather is clear and the target is high up in the sky, and once again, there’s not a minute to waste. Time to move to the next target.