A Black Hole Snow Globe? An Intermediate Mass Black Hole at the Center of a Globular Cluster

Status: Accepted for publication in the AAS Journals

Despite their importance, IMBHs remain elusive and their existence has not been quite confirmed. The best way to measure black hole masses is using the motions of stars around them, but observing that can be quite difficult for IMBHs since they have a small sphere of influence compared to supermassive black holes. Today’s paper takes a look at a possible IMBH in a globular cluster in M31, also known as our neighbor the Andromeda galaxy.

Pinning Down the Mass

The globular cluster B023-G078 is the most massive cluster in Andromeda, and the velocity of stars within the cluster seems to indicate the presence of a central mass. The authors of the paper use images of the cluster from the Hubble Space Telescope (HST) and spectroscopic observations from Gemini to determine if this mass could be an IMBH.

The authors use the HST images to come up with models for the mass of the black hole. They use a method called Jeans anisotropic modeling (JAM), related to the Jeans equations. The high resolution of the Gemini data (and proximity of the cluster) allows them to get information on the motion of individual stars within the cluster. Using integral field spectroscopy, the authors determine the root mean square velocity of stars at different distances from the center of the cluster, which depends on the central mass. The authors then compare the JAM models to the observed velocities, shown in Figure 1 below. 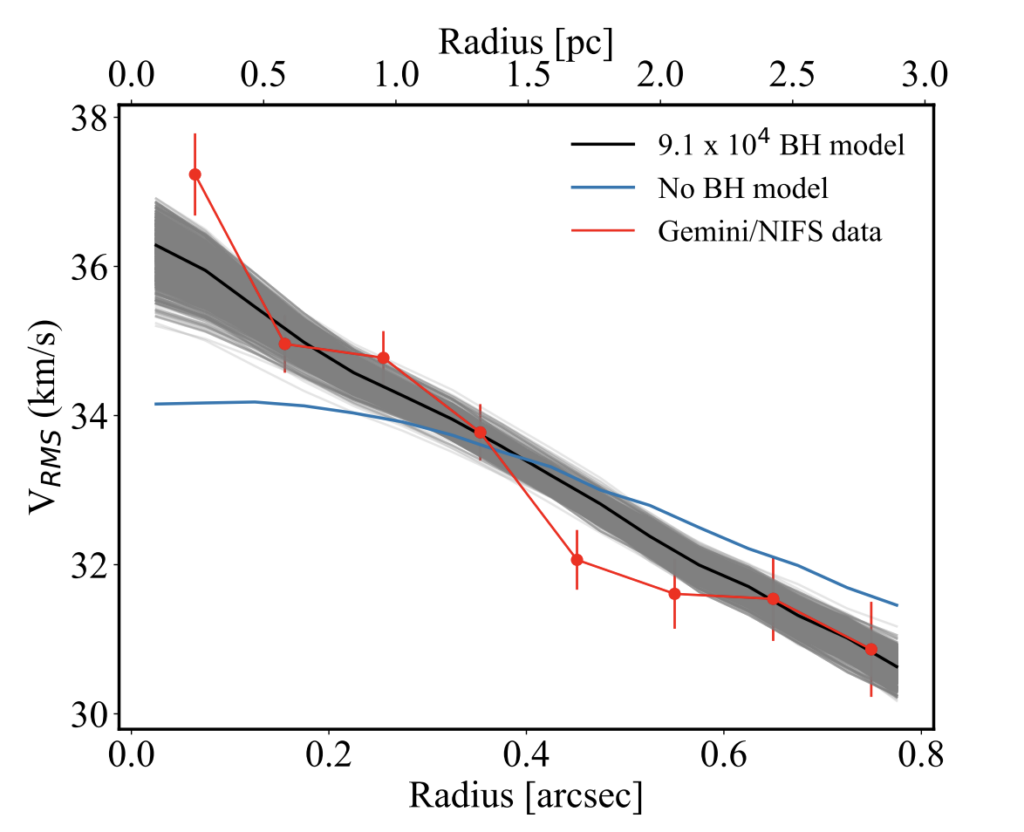 Figure 1. Root Mean Square velocity of stars in the cluster vs radial distance to the center of the cluster. Points in red show the observations from the Gemini telescope. The black line shows the best-fit JAM model for a massive black hole. The blue line shows the JAM model assuming there is no black hole. (Left panel of Figure 5 in the paper).

The best-fit models give it a mass of 9 x 104 M☉, placing it firmly in IMBH territory!

It is possible that the central mass is actually several stellar mass black holes, rather than one IMBH. The main difference between the two possibilities would be that many black holes would look more extended than a single compact object. The authors investigate this possibility using their JAM models, but any conclusions may require higher resolution observations.

However, there is something else that can give us a clue if this is indeed an IMBH, and that is the origin of the globular cluster.

Remnants of a Small Galaxy?

Because of the metallicity of the cluster, the authors consider the possibility that B023-G078 is a remnant of a small galaxy that underwent a merger with Andromeda, making it a stripped nuclear star cluster (NSC). The idea is that as small galaxies merge into larger galaxies (what is known as a minor merger), tidal forces pull apart parts of the galaxy, including the collection of stars at the center (the NSC) which houses a massive black hole, leaving behind a globular cluster.

The combination of the mass of the black hole from modeling, and the evidence that this cluster is a stripped NSC, leads the authors of the paper to favor the idea that there is indeed an intermediate mass black hole in the cluster!