Dusty star-forming galaxies (DSFGs) could be important for learning what drives star formation, since they have been observed to have extremely high star-formation rates. These galaxies could also be predecessors to some quenched galaxies that have stopped forming stars at high redshifts. However, due to observational challenges, it is relatively uncertain how common DSFGs are at high redshift.

UV and optical light coming from young stars in DSFGs gets absorbed by large amounts of dust and re-emitted in the infrared. In some cases, there is so much dust that the optical emission from the galaxy is heavily obscured and all we can observe is the light re-emitted by the dust. When galaxies are undetectable (meaning they either can’t be observed or their presence can’t be confirmed) in both optical and near-infrared light, we call them OIR-dark galaxies.

At high redshift, DSFGs are observable at long wavelengths with telescopes like the Atacama Large Millimeter/submillimeter Array (ALMA). The authors of today’s paper investigate two OIR-dark galaxies from the Mapping Obscuration to Reionization ALMA (MORA) survey, measuring their redshifts and physical properties.

The two galaxies, MORA-5 and MORA-9, have been observed in multiple wavelengths with ALMA and other telescopes like the Hubble Space Telescope. What makes them interesting is that they are detected in ALMA observations but not in optical or near-infrared wavelengths, so they are considered OIR-dark. The availability of multi-wavelength observations allows the authors to study the galaxies’ spectral energy distributions (SEDs), which tell us how a galaxy’s energy is distributed in different wavelengths. The shape of a galaxy’s SED depends on properties such as rate of star formation and gas mass, so fitting the SED can give us a clue about the physical environment of the galaxy.

Before they can determine the properties of these galaxies, the authors must obtain their redshifts. One way to measure redshift is using spectroscopy, since the wavelengths of galactic emission lines get shifted depending on their distance to us. Since spectroscopic data for these galaxies is not available, the authors use three different methods to estimate redshift from the SEDs. Figure 1 below shows the SEDs of these two galaxies, and the fitting results from these three methods. 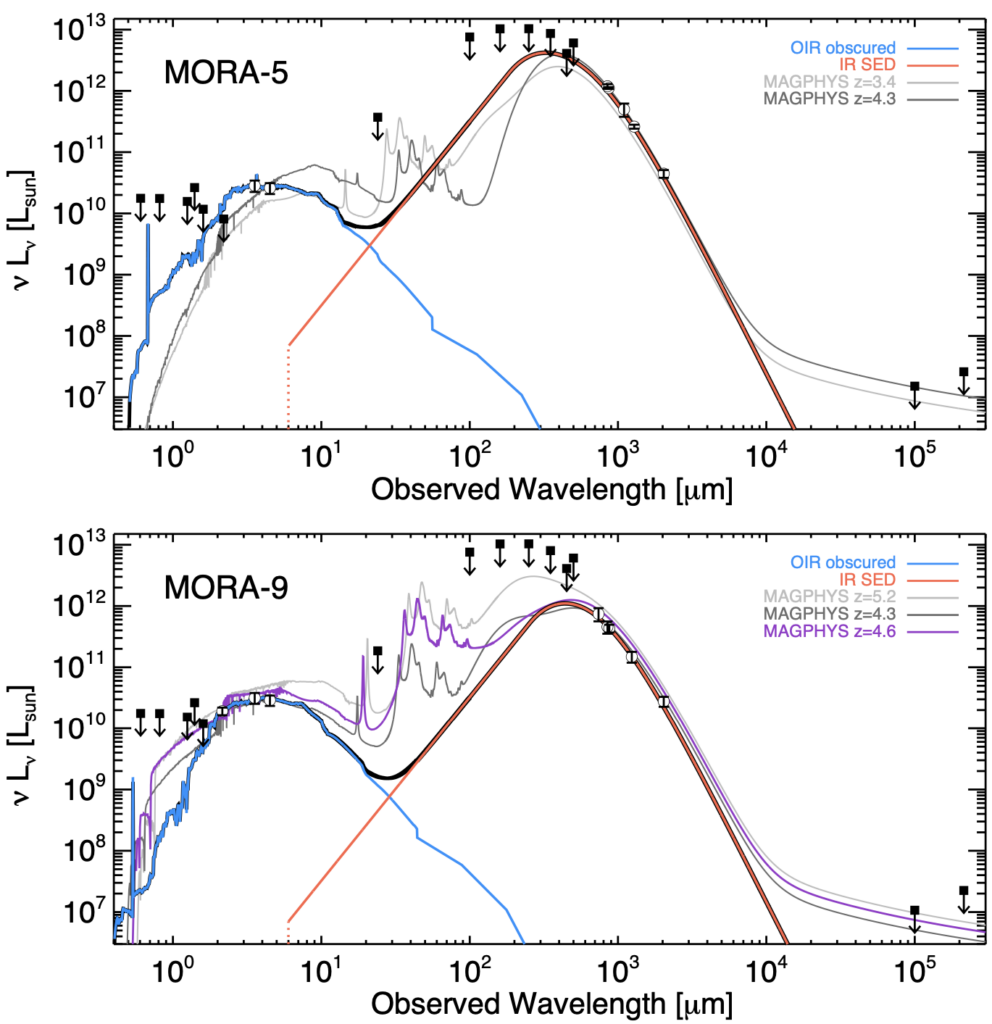 One method called MMpz fits the far-infrared part of the SED and is based on the relationship between the infrared luminosity and the wavelength at which the SED peaks. The two properties are anti-correlated, meaning that galaxies with higher infrared luminosity peak at shorter rest-frame wavelengths. This is helpful since knowing the wavelength at which the SED is expected to peak can help figure out how much it has been redshifted. Another method uses the software EAZY fits the (faint) OIR data. The third method, MAGPHYS,  fits the entire SED (both OIR and far-infrared regions) to figure out the redshift. The best estimates from these methods place the galaxies at redshifts > 4, potentially making them the highest redshift galaxies in the MORA survey.

After estimating the possible redshifts, the authors estimate the physical properties of these galaxies. First, they once again use correlations between the infrared luminosity and other galaxy properties, but this time to estimate the star formation rate. They estimate that in one year MORA-9 forms a stellar mass equivalent to 200 M☉. MORA-5 on the other hand, forms ~4 times as many stars, with a star formation rate of 830 M☉ per year! The authors also estimate the mass of the galaxy that comes from stars, gas and dust. 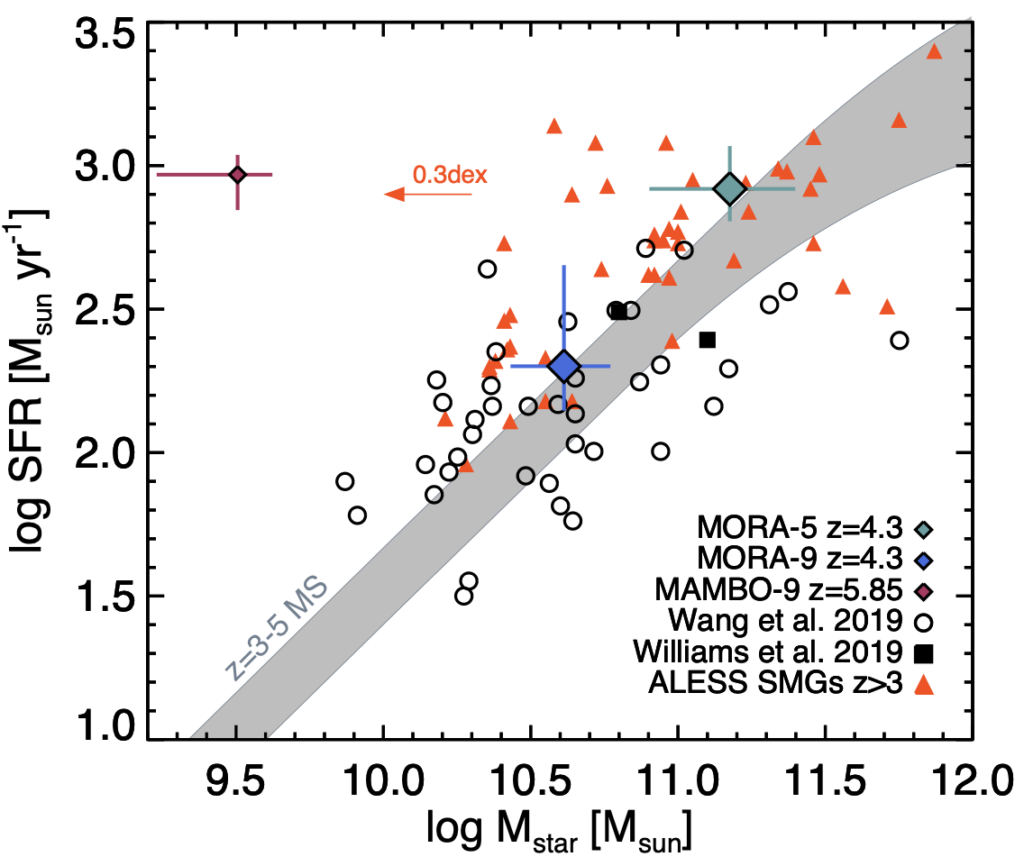 Figure 2. Star formation rate (in M☉ per year) vs stellar mass (in M☉) of DSFGs from different surveys. The blue and green diamonds represent the MORA galaxies discussed in the paper. The gray shaded area represents the main sequence that galaxies follow for star formation at redshifts 3-5. (Figure 7 in the paper).

To try and figure out how common these galaxies are, the authors look at two other galaxies, MORA-3 and MORA-4, and estimate the volume density of OIR-dark galaxies to be n ~ 5 x 10-6 Mpc-3 . The authors note that it’s unclear why some DSFGs are OIR-dark while others aren’t, and suggest it could simply be dependent on their redshift. Regardless of what makes a DSFG OIR-dark, this class of galaxies provides a way to study the environments of distant star-forming galaxies that are otherwise invisible.

An Extreme, Distant Quasar in the Cosmic House of Mirrors

Dust off your old galaxies, we’ve got a new discovery!