Title: On the quenching of star formation in observed and simulated central galaxies: Evidence for the role of integrated AGN feedback

Status: Accepted for publication in Monthly Notices of the Royal Astronomical Society, available on arXiv

This cessation of star formation is known as “quenching”. But what causes certain galaxies to quench? One suspect is supermassive black holes, which live right in the centres of galaxies. As their name suggests, these objects are big, with masses ranging from millions to billions of times that of our Sun. This means that they produce tremendously strong gravitational fields, which can accelerate nearby material almost to the speed of light. When lots of material surrounds a black hole, it can form an accretion disk, a structure made out of incredibly fast-moving material that throws out vast amounts of light and energy.

This kind of supermassive black hole is referred to as an Active Galactic Nucleus, or AGN. These are some of the brightest objects in the Universe. A now-famous example is the AGN in the centre of the galaxy M87, which was the subject of the first ever photograph of a black hole, taken in 2019 by the Event Horizon Telescope. The energy thrown out by an AGN can heat up the gas in a galaxy, or eject this gas from a galaxy altogether, and either of these mechanisms has the ability to stop star formation in its tracks. Today’s paper investigates the properties of AGN in quenched and star-forming galaxies, to gain an even deeper understanding of the role that AGN play in quenching.

Winding back the clock

The authors of today’s paper use data from the Sloan Digital Sky Survey (SDSS), a huge observational survey of galaxies. They also combine this with data from three different computer simulations of galaxies: EAGLE, Illustris and IllustrisTNG. This allows them to observe galaxies at the present day, and then use simulations to study how these galaxies looked in the past. Using both simulations and observations, they investigate how a range of AGN and galaxy properties correlate with quenching; these properties include the supermassive black hole mass, mass of stars in the galaxy, and the mass of gas in the halo that surrounds each galaxy.

Several parameters correlate with the likelihood of galaxies to be quenched – for example, quenched galaxies generally contain a greater mass of stars. However, using Machine Learning techniques, the authors are able to pick up causal relationships, to determine which properties are truly responsible for quenching. Figure 1 shows the relative impact of each property on the quenching of galaxies. 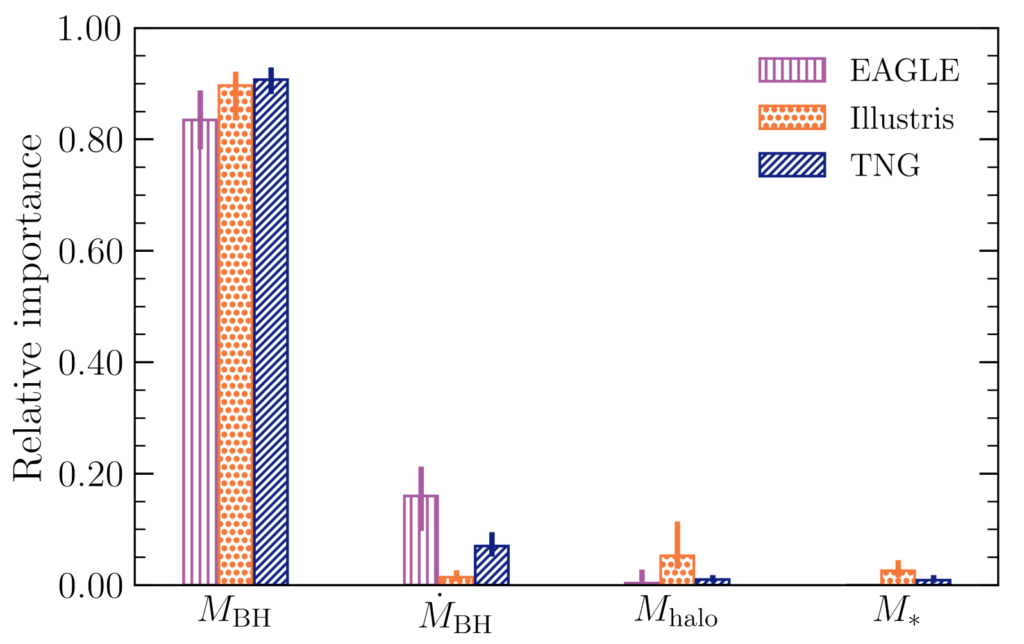 Figure 1: Relative importance of supermassive black hole mass, black hole growth rate, mass of gas surrounding a galaxy, and mass of stars in a galaxy, on the probability of the galaxy being quenched, in the three simulations used. Adapted from Fig. 6 in today’s paper.

It turns out that the most important factor in quenching a galaxy is the mass of the central supermassive black hole, which powers an AGN: quenched galaxies contain much larger black holes than star-forming galaxies. Conversely, the rate at which the black hole mass is growing does not affect galaxy quenching. These black hole properties correspond to properties of an AGN: fast-growing black holes lead to bright, luminous AGN, while a black hole with a large mass tells us that it has had a high total AGN activity over its entire lifetime.

The chequered pasts of AGN

Previously, we might have expected that galaxies containing bright, powerful AGN would be quenched, as the AGN heat up their star-forming gas and expel it from the galaxy. The authors do indeed show that a period of intense AGN activity can result in both of these processes occurring. However, whether a galaxy is quenched depends instead on the total amount of AGN activity over its entire lifetime, not just its activity at the present day; Figure 2 clearly shows how quenched galaxies have greater supermassive black hole masses. 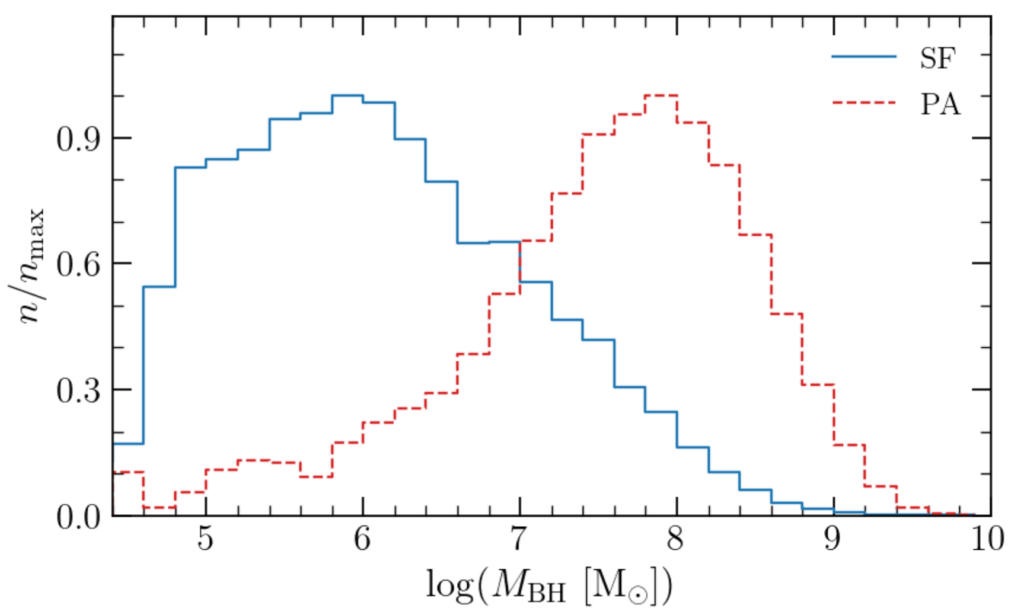 This means that a period of AGN activity (corresponding to a rapid increase in supermassive black hole mass) will lead to a galaxy being quenched, irrespective of whether this burst of energy was recent, or a long time in the past. Not only that, but this activity is more important than any other galaxy properties in stopping the formation of new stars in a galaxy. This is a testament to the power of AGN: regardless of what a galaxy is experiencing now, a powerful AGN in its past can impact its star formation rate for billions of years to come. In the future, studies on the entire histories of AGN will hopefully shed even more light on the dramatic impact that they have on their host galaxies.